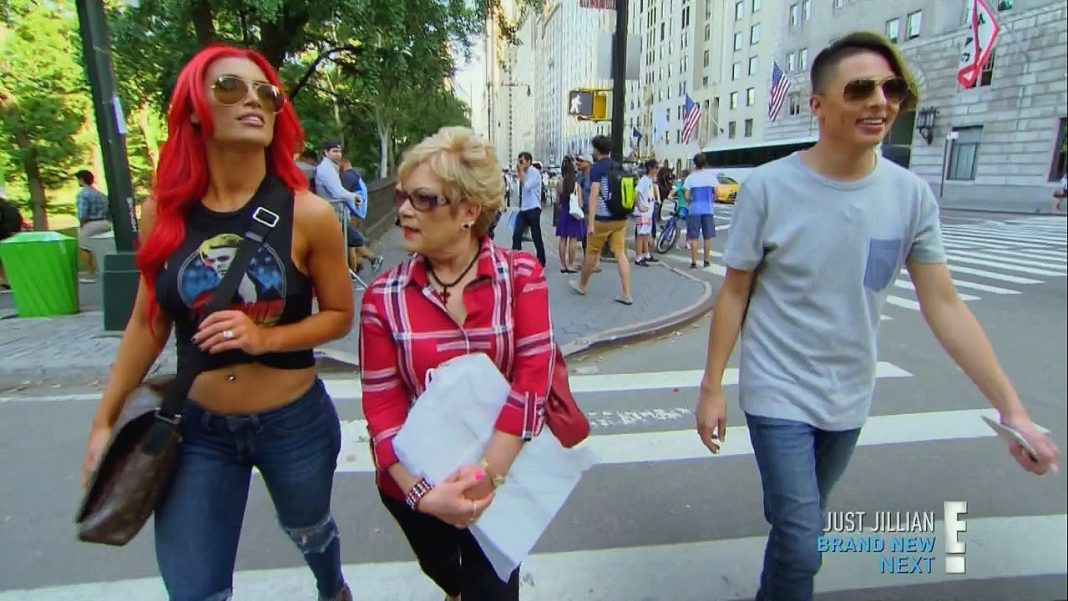 On this week’s episode of “Total Divas,” Brie and Nikki went out to lunch after returning to the United States from Japan. Nikki expressed concern that when she told John Cena that Dolph Ziggler wanted to be in a romantic relationship with her again, she expected John to get angry, but he didn’t.

At home, TJ was watching a Divas match with Nikki, Brie, Paige, Alicia Fox, Becky Lynch and Charlotte. Nattie watched the match with TJ and said she was happy for Becky because she and Becky had matches together when WWE was doing shows in Japan. Nattie said watching the match made her want to be back in the ring, but she had to support TJ on his upcoming surgery. The next day Nattie drove TJ to the hospital. After his surgery, Cesaro went to visit him at the hospital. Then Nattie got her work schedule but told TJ she didn’t want to leave him. TJ encouraged her to participate in Summer Slam week even though he was in the hospital.

Paige stopped by Alicia’s hotel room to take care of her because she was sick. They talked about the fact that if Alicia was too sick to wrestle, she and Paige wouldn’t be able to have their scheduled match at Summer Slam.

John and Nikki went out to dinner to celebrate their third anniversary of dating. Nikki told John she had  been talking to her therapist about her and John getting married. John said he would love to marry Nikki, but he was concerned that she wants to have a child, and he doesn’t.

Later, Nikki and Brie had drinks with their mother. They talked about how even if Nikki and John did get married, John doesn’t want a child, but Nikki does.

Eva Marie said she was happy to be in NYC for Summer Slam week. She said she was working live NTX events so she could eventually be put back on the main roster.

Nikki said she felt bad for Nattie because all the other divas were involved in Summer Slam except for her. Nattie said she had to be at all three WWE shows in Brooklyn even though she wasn’t in any of the shows.

While in NYC, WWE asked Nattie to do a Friskie’s event. She said being around the fans reminded her of what she wasn’t doing. Brie and Nikki took pictures with fans, and Dolph Ziggler showed up. The three of them did a reading challenge for local students. Nikki said Dolph is amazing with kids and would make a great dad.

Backstage at NXT Nattie was told they didn’t need her for the show after all. She said she took it personally and felt like chopped liver.

At a Make A Wish Foundation event, Nikki said they were celebrating John’s 500th visit with terminally ill children. Nikki said John was so good with kids even though he doesn’t want his own.

Alicia felt better in time to do her Summer Slam match but was upset because she was having a difficult time executing it. Alicia also said that Paige was bringing personal issues into the match. Backstage after the match Alicia told Paige she was upset with her for doing that.

Paige and Kevin had dinner together at a bar, and Paige vented about Alicia because they were supposed to hang out and she wasn’t around to. Paige said it bothered her that Alicia wouldn’t talk to her after their Summer Slam match.

Nattie had lunch with Nikki and Brie, and Nattie said she was there to avoid the bullshit she was dealing with that week.

Backstage at a show, Paige and Alicia passed each other in the hallway and Paige tried to start a conversation, but Alicia wasn’t interested. Then Paige and Alicia finally sat down and discussed their problem. Alicia said she was upset because something that she told Paige in confidence ended up on Twitter. Then she apologized for not having told Paige what was on her mind. Alicia said she was lucky to have a friend like Paige that would confront her if there was a problem between them.