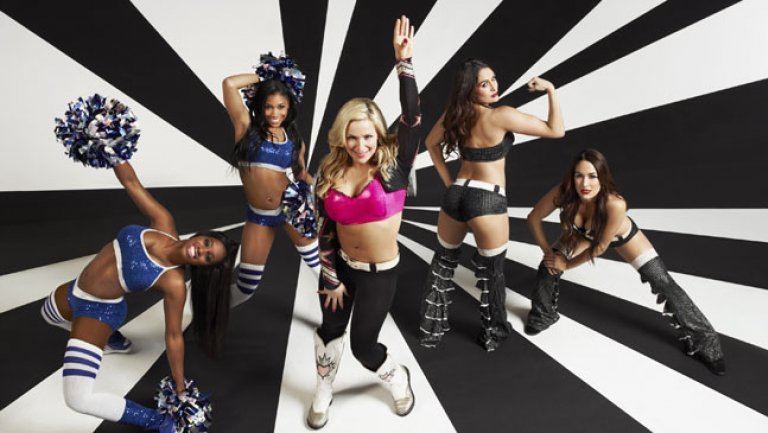 On tonight’s season premiere of “Total Divas,” backstage at RAW, Dolph Ziggler and Nikki Bella talked about their previous romantic relationship. Dolph tried to convince Nikki to give him another chance because now he can give her the things she wants, like a husband. Dolph tried to kiss Nikki, and she pulled away and scolded him for trying to kiss her when they were in the same building as her boyfriend, John Cena.

Afterwards, Nikki told Brie that Dolph tried to kiss her, and she complained she couldn’t even be his friend anymore. Brie said she could see that Dolph has feelings for Nikki. Dolph tried to talk to Nikki again, and she told him no, but then she consented to. Nikki said Dolph needed to find someone that made him incredibly happy, and he asked her what would happen if he had already found that someone and it was her. Nikki then went and found John backstage and hugged and kissed him. Nikki told Paige what Dolph had done. Nikki said she was embarrassed for Dolph because of his behavior.

Nattie was worried about her husband TJ after an injury that could keep him out of the wrestling ring for a long time. Paige talked about telling her boyfriend Kevin that she doesn’t want to be engaged right now, even though she said yes when he asked. Nattie’s parents came to her and TJ’s house in Tampa. Nattie was worried about the surgery TJ will have to have on his neck as a result of getting injured in the ring.

Over dinner, Brie and Daniel Bryan talked about Dolph trying to kiss Nikki. Brie asked Daniel if he was enjoying doing Tough Enough and he was it wasn’t his thing. Nikki tried to cheer him up by telling him that at least he had the option of doing it. Daniel said once he stopped wrestling no one would listen to him anymore.

In Tokyo, Paige visited a cat cafe. While she was there, she got a video call from Alicia Fox. They talked about Paige waiting to tell Kevin she didn’t want to be engaged.

Daniel and Brie met with her business partners for a new venture she is pursuing. Brie said it might be time for Daniel to give up his wrestling career and go into business with her.

In Tokyo, Nikki and Dolph talked backstage at a WWE house show. Nikki asked Dolph to apologize for causing a scene at work. Nikki called John her soulmate and Dolph said that she throws that word around a lot. Then Nikki and Paige went to a Fish Spa. Dolph showed up at the spa because Paige asked him to, but Nikki had no idea he was coming by. She said she wanted them to talk about the situation and talk Dolph out of telling John he wants Nikki back. Paige said she would be the mediator between them. Paige asked Nikki where she saw herself in a couple of years, and Nikki said she would be married to John. Nikki told Dolph he had his chance to be with her, but he blew it.

At home, Brie and Daniel Bryan argued about how and when they would be working on the new business venture. Brie told Daniel she wanted this to be a fun project for them to do. Daniel said he wasn’t ready to start a new chapter of his life even though Brie wanted him to. He said he really wanted to keep focusing on wrestling and Brie said she was there to support his dream.

Paige landed in Orlando and Kevin picked her up from the airport. When Kevin held Paige’s hand he noticed she wasn’t wearing her engagement ring; She said she took it off so she wouldn’t lose it. When she and Kevin got home, she got a call from her mother saying that she had seen on TV that Paige had gotten engaged. Her mom asked her questions about the engagement, but Paige rushed her off the phone without answering any of them. After Kevin started pressuring Paige to start making wedding plans, she finally confessed to him that she didn’t want to be engaged. She admitted she felt pressured to say yes to his proposal, and he told her she should have just said no. He forgave her and told her he still loved her, and he wasn’t leaving her.

Backstage, Nikki watched a match in which John and Dolph were partners. That night she and John went out to a romantic dinner at an expensive restaurant. Nikki finally confessed to John that Dolph wanted her back and was shocked when John didn’t get mad at her for it.