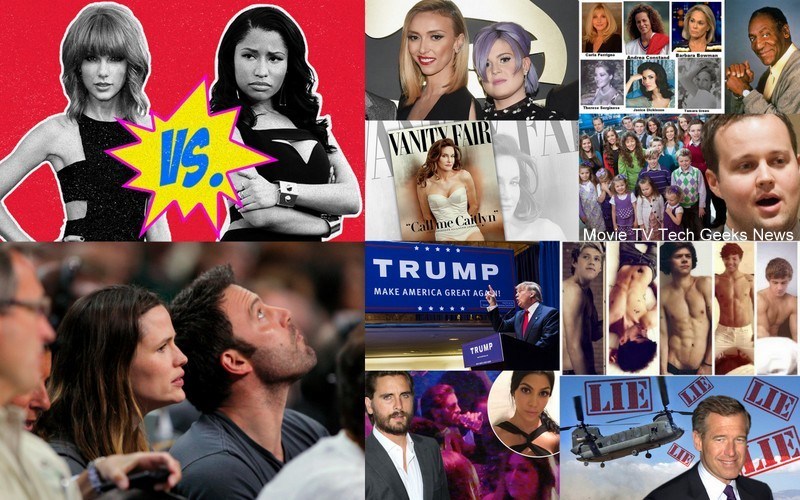 Every year, you can count on plenty of celebrity gossip, but there’s always those certain stories that clog the media airwaves for much longer than the usual story. Here’s the Top 10 biggest celebrity stories of 2015 thus far. I’m sure there’ll be some doozies coming before 2016 hits though.

Arguably the biggest celebrity moment of this year was when Bruce Jenner went public about his decision to transition into a woman. Bruce, who is a former Olympian, sat down for a one-on-one interview with Diane Sawyer to tell his story and his plans to transition into his true identity.

Caitlyn Jenner made her first appearance on the cover of Vanity Fair, where she donned a strikingly different look. Since then, Caitlyn is starring in her own docu-series on E! that follows her journey as she becomes part of the trans-community. In addition, it shows her family’s reaction to the transition, including her daughters Kim, Kourtney, Khloe, Kendall and Kylie.

While it’s hard to remember a presidential campaign without Donald now, at one point one of the biggest stories of the year was when Donald Trump announced his presidential candidacy. The business mogul announced on June 16 that he would be running as a Republican candidate.

Since then, Donald has continued to shock audiences with his “brutal honesty” and controversial comments regarding Mexican immigrants, women and war veterans. His polarizing ways have caused both NBC and Macy’s to cut their ties with him, which led to Miss Universe having to find a new TV network to be shown on and for The Celebrity Apprentice to be suspended until a new host is found.

Although TLC’s 19 Kids and Counting has been cancelled for a few weeks now, it would be hard to believe when we first entered 2015. The show drew in some of the highest ratings for TLC and there were plenty of big events happening in the Duggar’s lives (including pregnancies and engagements).

However, things were shook up when Josh Duggar admitted to sexually molesting 5 young girls when he was a young teenager. Later, 2 of these girls were revealed to be his younger sisters, Jill and Jessa. After numerous companies pulling out of partnership deals, and a slurry of backlash from audiences, TLC decided it was finally time to pull the plug on the hit show.

Then, to top it all off, Josh Duggar gets caught once again in a scandal where he was a member of the cheating on wife website Ashley Madison. He claims he’s not going into rehab for a long quiet stay without any children or people to cheat on near him.

Although reports began surfacing at the end of 2014, it was really in 2015 that the severity of Bill Cosby’s actions became known. As of the beginning of July 45 women had stepped forward accusing Cosby of sexually abusing them and in some cases drugging them.

In addition, court documents were also released this year that quoted Cosby saying that he had used drugs in order to sleep with women he desired. The documents also revealed that he had gotten numerous prescriptions for Quaaludes filled during the times of the accusations.

After 10 years of marriage, and 3 children together, one of Hollywood’s a-list couples split ways this year; This being Ben Affleck and Jennifer Garner.

Since they got married, the couple has faced countless rumors of splitting, however they always seemed to stay together. Therefore, many were shocked and upset when the two stars released their statement that they were in fact getting divorced.

Following the announcement, the scandal of #nannygate has arisen. This being the theory that Ben Affleck had an affair with the couple’s nanny, which Jennifer found out about and eventually filed for divorce. However, Ben has been adamant that these theories are not true.

Another big split in Hollywood that made waves was between Kourtney Kardashian and Scott Disick. Although the couple never married, they had been dating for 9 years and had 3 children together.

The couple has had their fair share of hardship, which was shown on their numerous reality shows (Keeping Up with the Kardashians, Kourtney and Khloe take the Hamptons, etc.) However, they always seemed to get back together after every break up.

Sources say this time is different as Kourtney is fed up with Scott’s refusal to get help for his substance abuse issues and his reckless partying. The break-up is being documented for the next season of Keeping Up with the Kardashians.

Taylor Swift once again found herself in a headline-making event surrounding the MTV VMA’s. While this time it is not with Kanye West, the pop star did find herself intertwined in a short-lived Twitter feud with rapper Nicki Minaj.

Nicki was upset that she wasn’t nominated in more categories, including Video of the Year and claimed it was because she didn’t have “slim bodies” in her music videos. Taylor, taking this a jab at her and her supermodel best friends in her “Bad Blood” video, criticized Nicki for “pitting women against each other.”

Although the two quickly made amends (Taylor apologized), this did allow for Katy Perry to get a snarky comment in, aimed at Taylor who reportedly wrote “Bad Blood” about her feud with Perry.

In March NBC News anchor Brian Williams issued a public apology for his “mistake” in misremembering events that took place 12 years ago, where he claimed he was in an aircraft that was hit by RPG fire. Several militants claiming this to be false called out the news anchor, saying that Williams was in a following aircraft.

Since the apology and confession, Williams has been replaced and was demoted to anchor of MSNBC (although he still makes $10 million a year).

One Direction definitely kept their fans, “The Directioners,” on their toes this year. The first headline-making event happened on March 25, when band member Zayn Malik announced that he would be leaving the band to seek out a “normal life.” Since then, Zayn has signed a solo record deal with RCA Records. Seems that his “normal life” explanation was just an excuse to break away into a solo career.

The next big headline from One Direction came when the public found out that band member Louis Tomlinson was going to become a dad. In July, multiple media outlets broke the news that Louis’ girlfriend Briana Jungwirth was pregnant.

Kelly and Giulianna Learn One Lesson

Both stars had some controversy over racial-themed comments they made this year. In February, Giulianna caused a scandal when she made a racial remark about singer Zendaya’s dreadlocks on Fashion Police. The public backlash started right away and Giulianna quickly issued a public apology. However, fellow co-host Kelly Osbourne publicly shamed Giulianna and soon after quit Fashion Police.

In August, Kelly got a taste of her own medicine, when she was a guest host on The View. Kelly made a comment insinuating that if Donald Trump kicks out all of the Mexican immigrants there will be no one left to clean his toilets. Right away Kelly was in hot water, and she somewhat apologized claiming it was just a “poor choice of words.” Ironically, Kelly wouldn’t let Giulianna get away with that excuse earlier in the year.