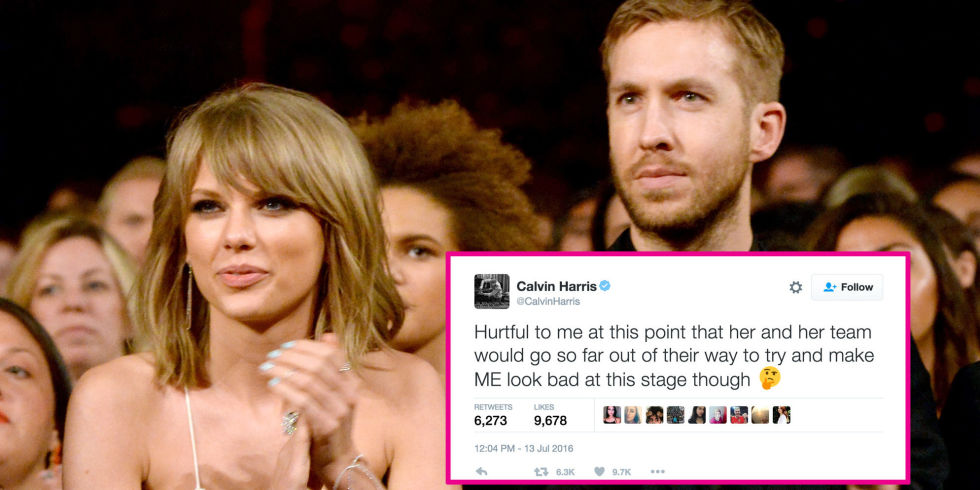 While at first, it seemed that Calvin Harris was trying to keep things civil between him and his ex Taylor Swift, all bets were off when Taylor’s team took credit for one of Calvin’s current hit songs.

Reportedly, Taylor got upset with Calvin when he was doing press for the song and failed to acknowledge her contributions (even though she was the one who agreed to credit herself under the name Nils Sjoberg). Right after the song was released Calvin did an interview with Ryan Seacrest, in which he said he “couldn’t see [a collaboration between him and Taylor ever] happening…” Subsequently, Taylor felt that her then-boyfriend took things too far and should have mentioned that she was one of the principal forces behind the hit track.

Now that Taylor’s team has confirmed she played a big part in “This is What You Came For,” Calvin is expressing his frustration, as his ex seems to be trying to steal some of his spotlight. In a Twitter rant, Calvin posted a series of tweets implicitly directed at Taylor – proceeding to even drop the name of her rival, Katy Perry.

At first Calvin complemented Tay’s talents, tweeting, “And [Taylor] sings on a little bit of [“This is What You Came For”]. Amazing lyric writer and she smashed it as usual…” However, things took a bit of a turn as the DJ continued, “I wrote the music, produced the song, arranged it and cut the vocals though. And initially she wanted it kept secret, hence the pseudonym. “ Going on to add, “Hurtful to me at this point that her and her team would go so far out of their way to try and make ME look bad at this stage though…I figure if you’re happy in your new relationship you should focus on that instead of trying to tear your ex [boyfriend] down for something to do.”

Calvin then took things to whole other level by tweeting, “I know you’re off tour and you need someone new to try and bury like Katy ETC but I’m not that guy, sorry. I won’t allow it…Please focus on the positive aspects of YOUR life because you’ve earned a great one.”

Needless to say, it’s not all rainbows and butterflies in the life of Taylor Swift like she seems to want the world to believe.

While rapper Kanye West isn’t known for being particularly open with his emotions, his recent tribute to his late mother will have you thinking otherwise.

Back in 2007, Kanye’s mother Donda West tragically passed away a day after undergoing plastic surgery. Wednesday would have marked her 67th birthday, which is why Kanye decided to take to social media to share his love for Donda.

On Twitter, the “Famous” rapper posted, “[My daughter] Nori asked if the airplane could take her to heaven to see you [Donda] for your birthday, I love you mom.” In addition, he also posted an old picture of him smiling with his arm draped around Donda’s shoulder.

Back in 2015, Kanye released a song titled “Only One,” in which he sang about the connection he feels with both his late mother and his daughter, North. In addition, the rapper is also the founder and head of a creative content company lovingly named Donda.

Tituss Burgess brings out the Queen for moving company

“Unbreakable Kimmy Schmidt” star Tituss Burgess mercilessly berated Frank’s Express after it tried to strong-arm him into posting a positive Yelp review before they even showed up, then when he complained, called him a hateful name.

Instead he posted a review saying, “These guys are the absolute most UNPROFESSIONAL workers I have EVER DEALT WITH . . . [A worker] texts saying no review, no show.”

Next, Burgess made a video about the experience on Instagram, and posted on Twitter, “He just texted and called me a F – – – – t. Poor thing doesn’t know hell hath no fury like a Tituss scorned.”

Frank’s Express didn’t get back to us. Seems they only respond to positive Yelp reviews.