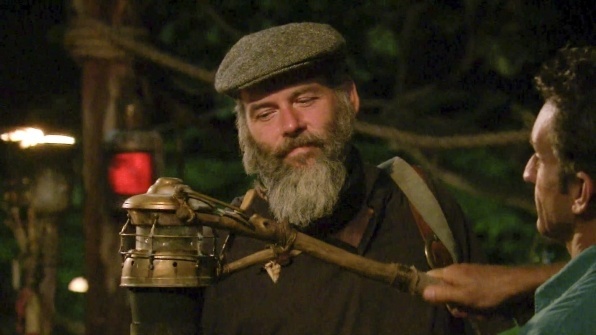 Survivor Worlds Apart was more relaxing as Mike said the previous tribal council was fun for him because it allowed him to break up a strong alliance. Dan said that everyone wanted Mike gone because he was selfish and self-centered. He also said that at this point in the game he has no interest in working with Mike and that he was banding with the other contestants to get Mike sent home. Mike then talked to Sierra about getting Dan out of the game. Carolyn said if Mike didn’t win immunity this week he was going to have to go.

Jeff announced this week’s rewards challenge. This one involves untying knots while completing an obstacle course. Once the knots were untied playing pieces were presented to the contestants and they had to successfully put together the puzzle. The winners of the rewards challenge would get a helicopter ride to a surf and turf meal complete with wine, which they were allowed to bring back to their camp. Jeff asked Rodney how he felt that he is the only one who hasn’t won a rewards challenge yet this season. Rodney responded that he was seeing stars and was missing out on the full experience of playing the game. He then said that he hoped someone else would feel sorry for him and help him out. Jeff asked Rodney if he felt a sense of entitlement and expected someone else to give him their rewards challenge. Rodney responded by saying it hurt him that on his birthday no one gave him their reward.

Dan, Sierra and Rodney formed the blue team for the rewards challenge and Mike, Carolyn and Will formed the red team. One hour after both teams got all their puzzle pieces no one had managed to put it together correctly yet. Jeff said Dan and the rest of the blue team didn’t know what to do but the red team was figuring it out. Carolyn then received the reward and choose to keep it rather than giving it to Rodney. She did say she hoped Rodney did not take that personally.

Mike, Carolyn and Will then boarded their helicopter and Mike said it was his first time on one. They passed over a volcano in the helicopter on the way to their feast. When they landed at their destination they dug into the food and drinks left for them. Will said he felt his whole body wake up when he finally got to eat real food. Mike mentioned himself Carolyn and Will ending up as the last three contestants and Carolyn said she was happy about that because she could work with him. Will said Mike was scrambling because he knew he was the next one on the chopping block. Will also said Rodney need to calm down. Mike talked about how Rodney is the only contestant that has ever tried to make people feel bad for not giving him their reward.

Back at camp Rodney told Sierra he was mad at Mike. Rodney accused Carolyn of going back on her word by keeping her reward. He said that even Carolyn said he shouldn’t take that personally, he did anyway. He also said that revenge was going to be very sweet.

Dan said it would be nice to find food since the red team was having their surf and turf meal. He then found fruit but said he didn’t know what it was and didn’t know whether or not it was safe to eat. Rodney ate it anyway and said that the fruit gave him hope for the competition again and that now he was with Dan because Dan is the one who found it. They determined that the fruit Dan found was watermelon.

Carolyn, Mike and Will then received a message at camp that gave them clues about the hidden immunity idol. Dan said that of Mike won immunity the other five of them would have to turn on each other.

Jeff then announced the immunity challenge for this week. They had to use grappling hooks to retrieve three bags, each with a ball in it. One of the three balls had to be used to solve a table maze. The first contestant to solve the maze correctly would win immunity. Rodney was having trouble retrieving the balls because the rope he had to use was giving him troubles. Mike and Dan were the first two to start figuring out the maze. Rodney, Carolyn and Will were struggling with this. Mike ended up solving the maze first and winning individual immunity.

Back at camp Dan said Carolyn was the next one that needed to go because she kept winning challenges. He also said she had to go because she’d been personable. Sierra then said that Dan was a threat and that he needed to be the one to go home. Carolyn also said Dan was the biggest threat because he had an advantage in the competition. Mike then considered trying to get rid of anyone but Dan, just to surprise the remaining contestants. Dan was angry because Mike said he had the power to save Dan from being eliminated from the game. He asked Mike how he could believe in him because he had given him nothing. Mike put the idea in Dan’s head that everyone else might be lying to him.

That night at Tribal Council Jeff asked Mike if he thought he could trust the others. Mike said when you have a common enemy it is easy to bond with people. Jeff asked Rodney about trusting the others and he couldn’t come up with an answer because he was fatigued. Rodney said one minute you think you can trust someone and then they form an alliance that damages that trust. They talked about how the game was going back and forth a lot.

Jeff then told them it was time to cast their votes. He counted them and Dan went home.