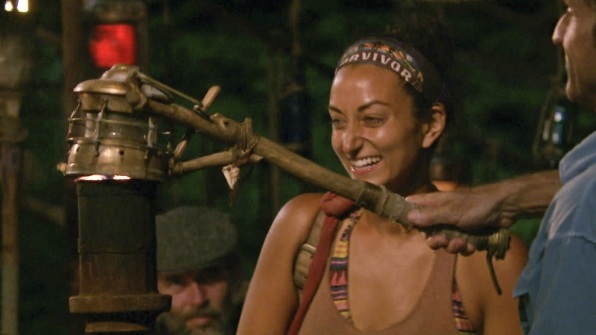 Tensions were mounting higher than ever on Survivor Worlds Apart as Dan said that when Mike went off on people last week he blew their trust in him. Dan asked Shirin how she was and she said she always has a Pavlov reaction when men yell at her because her father verbally abused her growing up. Dan apologized to Shirin for having made her cry at the last Tribal Council.

The Rewards Challenge for this week involved everyone being divided up into two teams of four people. Both teams had to use a barrel, two planks and a piece of rope to successfully transport their teammates from one side of the planks to the other side. The first four people to make it all the way across would get the reward, which was a visit to a catamaran that would take them along the coast of Nicaragua for the afternoon.  While on the catamaran the four winners would be given bacon cheeseburgers for dinner and pie for dessert. Jeff then told them to divide into two teams.

Mike, Shirin, Sierra and Rodney made up the blue team. Tyler, Dan, Caroline and Will made up the red team, who ended up winning the Rewards Challenge. Dan said he felt bad because Rodney hadn’t won any rewards challenges throughout the whole game. Jeff then sent them to their catamaran. Back at camp, Mike said his team lost the Rewards Challenge because the other three just stood around and watched him.

Sierra said she didn’t want to scare anyone by saying this, but Tyler was going to win the game in her opinion. Rodney said that while the others thought Tyler was a threat Rodney was the one that was a threat because he was running everything.

While they were on the catamaran, Dan said they won the challenge because there is no “Mike” in the word team. Dan also said that every time Mike screws up he finds a way to fix it.

Jeff explained this week’s Immunity Challenge was for each person to hold onto a rope that was holding 25% of their total body weight on the first day of the game. Attached to each rope was a bucket of water. The last man and the last woman to avoid dropping their bucket of water would win immunity. Sierra was the first person to be eliminated from the challenge. Tyler was the second person to be eliminated, quickly followed by Will. Dan got so tired he had to simply give up on winning this week’s immunity challenge. Shirin then lost her grip on her rope and was also eliminated from winning immunity, making Caroline the female to win immunity. Rodney was then eliminated, leaving Mike as the winner for the men.

Back at camp Carolyn said she was glad she had won immunity instead of Shirin, because otherwise one of Caroline’s allies would have to be voted off. She also said that Mike winning the immunity challenge threw a wrench into their plans because they wanted Mike to be eliminated from the competition.

Shirin told Dan that she knew he didn’t like her or trust her. She said that if everyone voted her out they were stupid because she wasn’t a threat when it came to challenges or a threat when it came to winning the game and that she realized Dan knew that. Shirin went on to say that Tyler was a huge threat. Shirin said Dan would vote her out instead of voting out someone who was a threat, simply because he didn’t like her. Shirin said Mike and Tyler were the two biggest threats in the game.

Tyler said he wanted to know what was in the bag Dan had found earlier this season. He then grabbed Dan’s bag and ran off when Dan wasn’t looking. When Tyler opened Dan’s bag and took out the chest in it, he opened it to find that Dan has an extra vote at Tribal Council that he has yet to use. Tyler said he was concerned Dan would use his extra vote to get Tyler eliminated from the game. Mike said that earlier in the game he could consider Dan his strongest ally but that he couldn’t anymore because Mike knew he screwed up. He also said he wanted Dan to trust him again. Mike said it was sad that he put his faith and trust in Dan but that Dan wasn’t the person Mike originally thought he was. Mike said he was considering using his hidden immunity idol that night at Tribal Council. Mike said he could give his idol to Shirin and doing so would change things in the game.

That night at Tribal Council the three jury members were brought in. Hali, Joe and Jenn were the three jury members. Jeff asked Shirin to talk more about her personal situation that she talked about last week. She said that since she doesn’t have a family the only people she could trust was her boyfriend and her best friends and that no one else in the game knew what that felt like. Dan then said that he was an adopted child and the only blood relative he has is his mother so his personal situation was very similar to Shirin’s.

Shirin then once again stated that Will verbally abused her on last week’s episode. Shirin complained because no one else had told Will he was wrong for verbally abusing her and that no one asked him to apologize to her.  Jeff asked Will why he wouldn’t apologize and Will said that he didn’t want to apologize if he couldn’t sincerely mean it. Mike asked the others to make sure they voted Tyler out of the competition at this Tribal Council. Rodney said Mike flipped his vote and made himself a target to get voted out. Dan said Mike now had to face the consequences of his actions. Mike used his immunity and Shirin was then eliminated from competition.