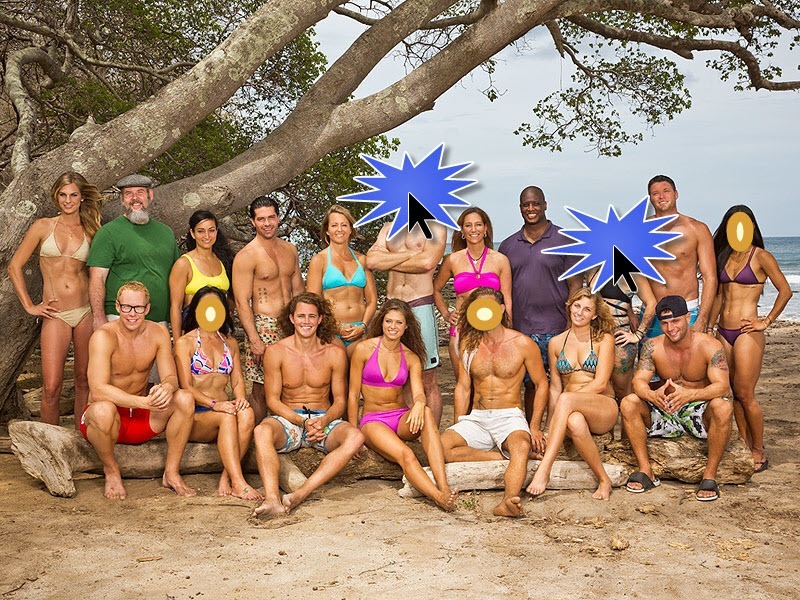 On this week’s Survivor  Worlds Apart, Hali said it was great to come back to camp from tribal council and see a campfire started. Mike found a snake and told his fellow tribe members to get a machete so they could kill it. 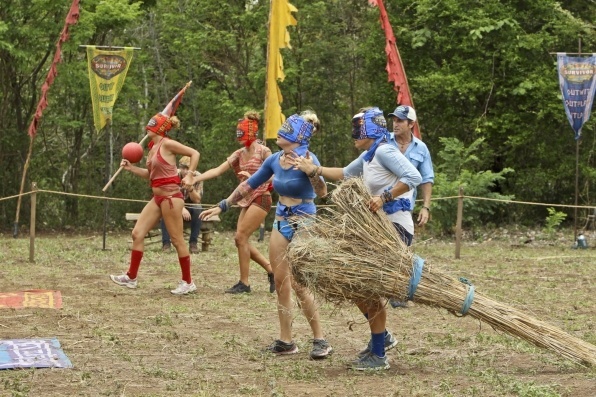 When the tribes arrived for this week’s reward challenge Jeff told the blue and white color tribes that Nina had just been eliminated. The challenge was one person from each tribe was the caller and the other tribe members would all be blindfolded. The caller for each tribe had to direct their fellow tribe members to the objects they need to find to complete the challenge. Once a tribe found all those objects they had to go back and raise a flag. Jeff announced that the first two tribes that won this challenge would receive a reward. He then announced that the first tribe to raise their flag would get three roosters and a hen that they could use for food and companionship. Todd sat out on the while collar tribe while the blue collar tribe had Rodney and Mike sitting the challenge out. This is because both the white and blue collar tribes had more people on them than the no collar tribe. Caroline, Sierra and Joe were chosen to be the callers in this challenge. The white collar and blue collar tribes found their first objects. 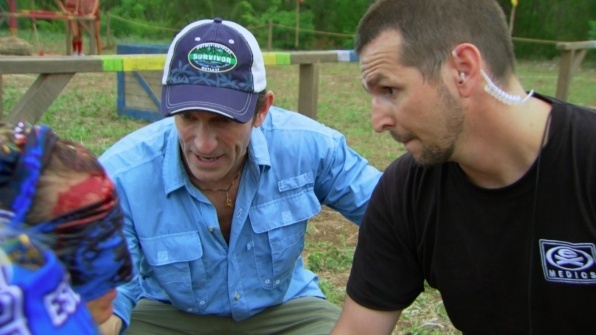 During the challenge, Kelly became injured and started bleeding. Jeff immediately stopped the challenge in its tracks. The medical team was then brought in to examine her and said that even though her head was bleeding she was going to be fine.

Back at camp the no collar tribe talked about the fact that it was Will’s birthday and they were going to cook one of the chickens to give him a birthday meal. This made Will emotional and he stated that it was the first birthday he wasn’t spending with his family. Jenn objected to killing one of the chickens and eating it because the chicken was providing them with eggs. She also said she doesn’t eat meat at home and didn’t want the chicken killed to be used for food. Jenn went out to get firewood and look for the immunity idol while the rest of the tribe members were preparing one of their chickens. She said that the tribe cooking the chicken dinner worked for her because it allowed her to have time to find the immunity idol.

Lindsay and Rodney argued because Rodney said that women should hold themselves to a higher standard than men and she found that to be a sexist statement. She said this made it hard to live with Rodney. He then said Lindsay looked like a female Mike Tyson. Rodney then said he didn’t know why they were fighting over something so stupid.

Shirin said she was glad the while collar tribe didn’t win the live chickens because no one else on the tribe would have known how to kill and cook one. The tribe did boil some of the eggs for themselves and talked about having a meal consisting of crabs and eggs. Shirin then said that in preparation for being on Survivor she had learned how to kill a chicken by slaughtering a rabbit. This made Joaquin feel like Shirin was a psycho because serial killers always start out killing small animals.

Max said than in the next challenge they shouldn’t ask Shirin to sit out because it will upset her. Caroline then said that both Max and Shirin are crazy. She also said that Shirin walks around camp naked because Max does as well and Shirin will do anything Max does.

As all three tribes arrived for the immunity challenge Lindsay and Shirin had to give back their immunity idols. Jeff then announced they would have to navigate a rope obstacle course. Standing on a balance beam each tribe had a bucket of balls that they had to get into holes in a large piece of wood. The first person to get three balls to the top of the wooden board would win immunity for the week. Lindsay, Dan and Shirin were chosen by their tribes to sit out of this challenge. The white collar tribe fell behind the other two tribes in completing the obstacle course. The no collar tribe ended up winning immunity. The white collar tribe was also safe but the blue collar tribe had to head to tribal council that night. 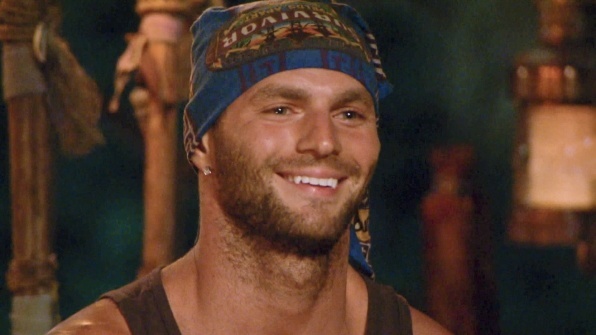 Sierra blamed Rodney for ruining the tribe’s chances of winning immunity. She then said that he should be eliminated because of that. Mike said no one knows who their true alliance is until Jeff announces who is safe in the competition and who is not. Lyndsay then asked Dan to vote Rodney off that night because she wanted him gone. Dan said if getting rid of Rodney would bring the rest of the tribe together that he would be willing to vote against Rodney.

Rodney then talked about wanting to eliminate Lindsay and getting his other tribe members on his side. Mike also said that he did not trust Rodney and had no problem getting rid of him. 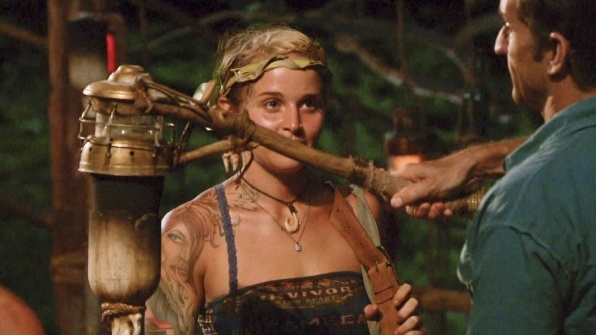 At tribal council that night they talked about why Rodney was not liked. Jeff said that Rodney was playing with fire. He then told them that it was time for them to cast their votes accordingly. Jeff tallied the votes and announced that Lindsey was going to be going home.

Back at camp the blue collar tribe talked about that night’s tribal council. Mike said the tribal council had gone the way the alliance had planned for it to go. He said he was unhappy that Sierra was being cut off in the tribe. Dan said everyone on the tribe should air their grievances so they could work together again. Sierra was being criticized by the other tribe members for the way she was playing the game. Rodney said that he didn’t care that Sierra was crying because she had tried to have him voted out at tribal council. She was crying because Lindsay had been eliminated. Rodney said that if Sierra couldn’t handle the game she could “pack her bags and leave.”

At the rewards challenge Jeff announced that they were changing things so that there would no longer be a white collar, blue collar or no collar tribe. They were then told they would be separated into two tribes only; red and blue. Each person had to choose one object with either red or blue written on it. They were not allowed to see what color they got until everyone had one. Jeff then announced that the rewards challenge consisted of launch balls across the beach for their tribe mates to catch in a lacrosse stick. He showed the two tribes the reward the winning tribe would get, which was kitchen supplies and food. One point was awarded for every ball that was caught and the first tribe to reach five points would win the challenge. The blue tribe won the challenge and received their reward.

Back at camp Shirin and Kelly talked about the game and Kelly said she threw out the bait for Shirin. The blue tribe was happy to see all the new supplies they had from winning the challenge. Rodney confessed to his fellow tribe members that two years ago he arrived home one day to find his sister dead inside the house. Tyler then said that Sierra is broken and he is happy to her have on his tribe because he is drawn to helping broken people.

Jenn said she didn’t like Shirin and she didn’t quite know why but that Shirin talks too much. Shirin then announced to the tribe that she was going to go try and poop. Max went into the water and got stung by a sting ray. He came back to camp with both his feet having been stung. Jenn took a bucket of boiling water off the fire and told Max to put his feet in it. She then said they needed to boil more water for him. Hali complained that he had put his feet in their drinking water and that he had a wart on his foot.

Dan and Mike argued about how to get Sierra to be a part of their alliance and Dan said he would ask Sierra to take a walk and apologize to her for his past behavior during the game. When he talked to her Dan told Sierra it hurt him when she verbally attacked him. Dan said that he and Sierra had made the same mistakes but she wasn’t willing to forgive like he was.

The two tribes then arrived for the immunity challenge. Jeff then announced that the challenge was for two people from both tribes to take a sled with pots on it and drag the sled through an obstacle course. The pots then had to be placed on a stand and balanced there so that they could be smashed with a wrecking ball. The blue tribe won the challenge and the immunity idol. The red tribe was told they would have to go to tribal council that night. 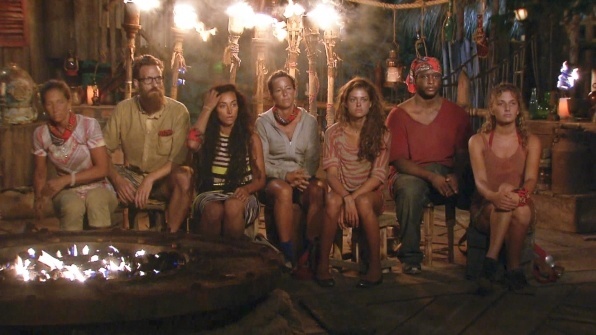 Back at camp Max said he was excited to get on with the game and that he was actually happy they were going to tribal council. Shirin said she thought she’d be in the power seat tonight and she was going to try to convince the others to vote Will out. 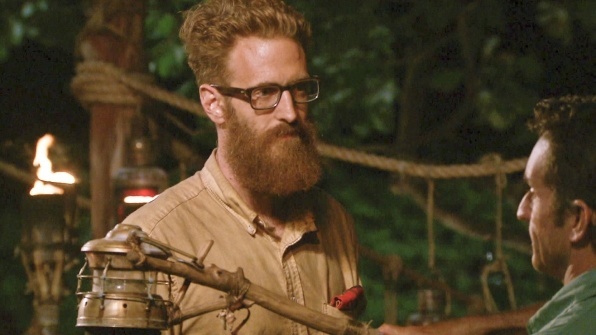 The red tribe arrived at that night’s tribal council Max said that they were in a unique situation. He said the blue tribe has all the athletic people and the red tribe has no athletic people. Jenn then laughed because Max and Shirin remember every detail of past seasons of Survivor. Shiri said she has a lot of respect for Survivor and it was always her dream to be on the show. Max then said he had to force himself to relax or else he would never be able to. Hali talked about loyalty votes and quality of life votes when it comes to determining which tribe member should be eliminated next. After much discussion the votes were cast to determine who would be eliminated that night. Jeff then tallied the votes an announced that Max was being sent home.