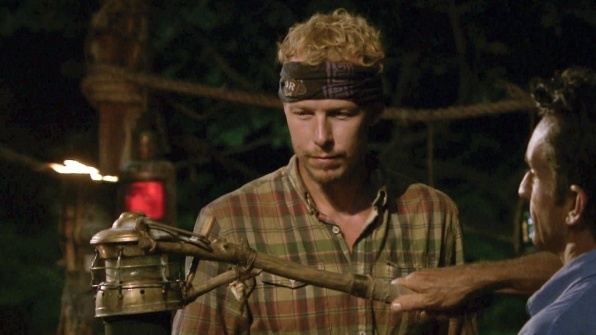 On this week’s episode of Survivor there was speculation that Dan and Tyler tried to vote each other out last week. The six remaining contestants all had a meeting together following the Tribal Council where Shirin was eliminated from the competition. Dan said when he got two votes Will and Tyler flinched so he knew they voted against him. Tyler said he felt Dan was gullible and he was going to try and vote him out again.

Rodney’s birthday fell on the 30th day of the game and he said he hoped he would get a reward since it was his birthday. He said if he didn’t get a reward the game would completely change for him. Of course, he turned into a big cry baby whining and showing his ass which he always seems to do anyway.

This week’s rewards challenge out two teams against each other in an obstacle course that included untangling a ribbon and getting a ball into each of the course’s five targets. The winner of this challenge would get supplies to deliver to children in a local orphanage. An afternoon barbecue for the winning team was part of the reward as well. Dan became the captain of one team and Caroline became the captain of the other team which included Mike and Sierra.

Will sat out of the challenge so the two teams would be easily matched. Rodney caused a huge time loss for his team by leaving behind the balls that had to land in the desired targets, causing him to go back to the beginning get the balls and complete the obstacle course with them in his possession. It came down to Mike vs Dan in the end and Mike won the challenge. Jeff said Rodney was still being shut out of the rewards. Rodney said that it was sad that no one would give him their reward. Will, Tyler, Rodney and Dan were sent back to camp while the winning team went to go enjoy the fruits of their labor.

Mike said he felt like a big kid playing with the children from the orphanage that the team got to feed as a reward for winning the challenge. Caroline said Rodney would be angry with her with not giving up her reward for him, but she was on Survivor and she was doing what she had to do. She also said she saw Mike in a different light and that he has a lot of power in this game between his history with winning challenges and his hidden immunity idol.

Rodney complained he was washing dishes on his birthday. He said he felt neglected and that the other contestants were not the family he thought they were to him. Rodney said he was pissed off at Caroline for denying him a reward on his birthday. Dan said he understood why Rodney was upset but it was a bit much to deal with. Rodney said Mike was going to go home this week and Tyler said Rodney had lost it and he couldn’t rely on Dan. Tyler said he knew Mike wanted him gone from the competition.

Rodney then tried to make everyone think that he wanted them to vote him off at the next Tribal Council because he wanted out of the game. Mike said he knew they were trying to make him feel safe so he wouldn’t play his idol but that he was smarter than that.

Tyler said he trusted Caroline and you had to trust others in order to advance in the game. Caroline said she felt like was currently in charge of the game.

This week’s Immunity Challenge was to balance on a small perch while holding onto a rope that they had to keep moving down the length of every five minutes. The last person standing would win the challenge. During the challenge Rodney said he had the worst birthday of his life. Will and Dan were the first two eliminated from the Immunity Challenge. Sierra and Rodney were then eliminated from the challenge. Caroline, Mike and Tyler were the last three survivors of the challenge. Mike then lost his grip and got eliminated, quickly followed by Tyler. This left Caroline as the winner of individual immunity for the week.

Dan said he, Mike or Tyler was probably going home that night but that he knew everyone saw Tyler as a threat. Tyler said Mike, Caroline and Dan all had advantages going into that night’s Tribal Council. Tyler talked about sending Dan home that night. Caroline said Mike was gunning for Tyler and it might be her only opportunity to side with him but she didn’t know if that was the right move to make. Caroline said she and Tyler had a bond but he was the only one who knew she had an idol.

That night at Tribal Council the jury was brought in. Hali, Joe, Jenn and Shirin were the four jury members. Dan said he was very concerned he would be going home that night. Tyler said he touched base with everyone after last week’s Tribal Council. Caroline said advantages were somewhat of a threat at this point in the game. Tyler said he would be surprised if he was the one voted out. Jeff then took the votes and tallied them up and told the remaining contestants if anyone had a hidden immunity idol they could play it. Mike then stood up and played his idol. Jeff read the votes and announced that Tyler was going home.