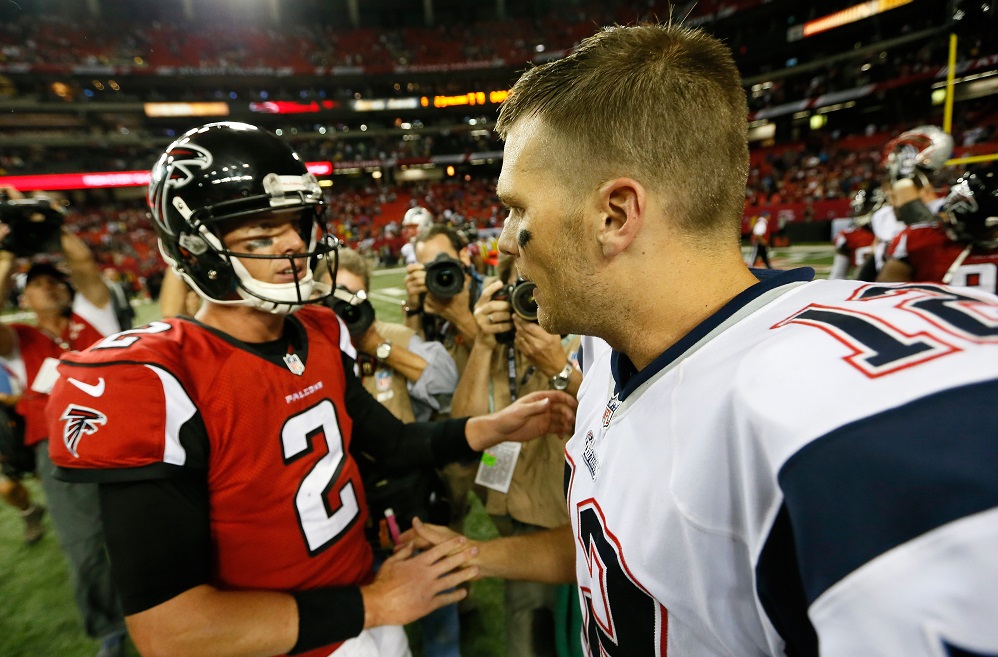 No one would have dreamed that the NFL season would end with a suspended Tom Brady going up against Matt Ryan and the Atlanta Falcons.

Even on Sunday, doubters were still assuming that the Patriots would be heading into Super Bowl 51 with the Packers, but as has been happening recently, things got upended. Now we can look forward to an exciting match between the Falcons and Patriots come Feb. 5.

A season that began with Tom Brady serving a four-game suspension will end with him in the Super Bowl, where his New England Patriots will take on Matt Ryan and the Atlanta Falcons.

While much of the attention between now and the NFL championship game on Feb. 5 in Houston will be focused on Brady vs. Ryan, the truly key matchup could be Atlanta’s score-at-will offense, which produced the most points during the regular season, against the unheralded defense of New England, which allowed the fewest.

And these two teams are playing their best football at the most important time.

AFC champion New England (16-2) has won nine consecutive games – and hasn’t even trailed since Nov. 27. NFC champion Atlanta (13-5) has won its past six in a row, scoring at least 33 points in each.

“We’ll enjoy this,” Ryan said after earning his first Super Bowl trip in his ninth season, “but we’ve got some work to do.”

Brady and coach Bill Belichick will be seeking their – and the Patriots’ – fifth Lombardi Trophy, and second in three years. This will be the franchise’s league-record ninth appearance in the Super Bowl, including titles in the 2002, 2004, 2005 and 2015 editions.

“This team showed a lot of mental toughness over the course of the year,” Brady said.

The Falcons have never won the Super Bowl. This will be Atlanta’s second trip to the big game; it lost to Denver in 1999.

The club’s never had a quarterback quite as good as Ryan, though.

The guy nicknamed “Matty Ice” went 27 for 38 for 392 yards, four touchdowns and zero interceptions, while adding a rushing TD, to boot, leading Atlanta past Aaron Rodgers and the Green Bay Packers 44-21 on Sunday in the NFC championship game.

“We did exactly what we’ve been doing all year, and it feels really good,” Ryan said after becoming the first quarterback in NFL history to throw for at least three TDs in four consecutive postseason games. “We’ll be ready to go. That’s for sure.”

Oddsmakers didn’t even wait for the second game to end before making New England a 3-point favorite over Atlanta in the Super Bowl.

New England opened the season with a 3-1 record despite using two backup quarterbacks while playing those games without Brady after he went through a lengthy court battle in an unsuccessful bid to have his ban overturned for what became known as “Deflategate.” NFL Commissioner Roger Goodell suspended Brady because the league said it determined the Patriots intentionally underinflated footballs used in an AFC championship game victory two years ago.

During Sunday’s game in Foxborough, Massachusetts, spectators mocked Goodell by chanting “Where is Roger?” – he chose to attend the game in Atlanta instead.

And as well as Brady played – 32 for 42 for 384 yards, those three scores and zero interceptions – it was the way New England’s defense played that stood out.

Right from the get-go, too: On Pittsburgh’s first two drives, nine plays yielded a total of 26 yards. Then there was the stand late in the second quarter, when the Steelers had first-and-goal at the 1-foot line and wound up settling for a field goal. And, by game’s end, the Patriots had forced two turnovers.

Brady, a three-time Super Bowl MVP and two-time league MVP, and the Patriots also own a pretty effective offense, even after losing star tight end Rob Gronkowski to an injury. New England ranked fourth in yards (386.2) and third in points (27.6).

Another thing these teams have in common is that neither hurts itself with turnovers: They tied for the fewest in the regular season, with 11.

That could be part of why bookies are expecting a high-scoring game, with most setting the over-under at 58 points.