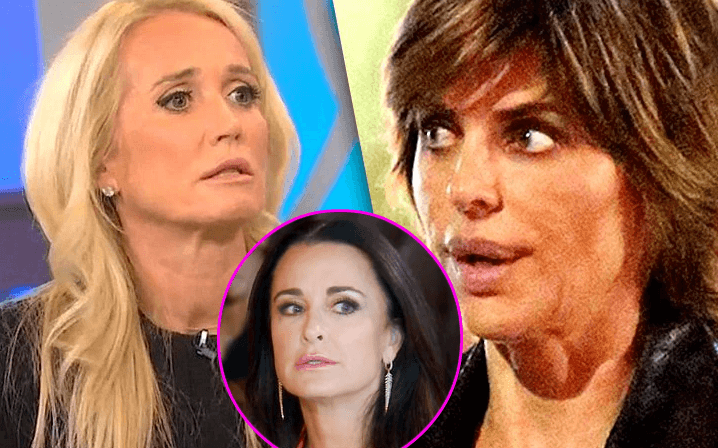 What better to kick off the New Year than with a brand new episode of Real Housewives of Beverly Hills? From Yolanda’s health struggles, Kyle’s family issues to Erika’s over-the-top alter ego, the woman have plenty to cover this season. On tonight’s episode “Hamptons, 90210,” several of the women make their way out to the Hampton’s to celebrate Lisa Vanderpump’s appearance on the cover of Bella Magazine.

The episode kicks off with Kyle consulting her youngest daughter Portia about what she should wear to the upcoming white party. Kyle then proceeds to complain about her packed, designer-filled closet, as even her luxurious wardrobe seems modest compared to her friend Lisa V’s.

Shortly after, we run into Lisa Rinna, who is in Philadelphia for a QVC appearance. Here, Lisa is seen wiping down every inch of her hotel room, as she explains she has developed some serious OCD habits when it comes to hotel hygiene.

Once again this episode continues to unravel the mystery that is Erika Girardi. Erika explains that she puts a lot of work into the upkeep of her 17,000 square foot home. Afterwards, she enlists her stylist who helps her pack the most fabulous outfits for pride week, where she is performing as Erika Jayne.

Over at Lisa V’s castle, Lisa is seen gossiping with her husband, Ken. Lisa is shocked when Ken explains that Kim Richards was arrested for trying to steal over $600 from a local Target. Lisa claims that there is no way that Kim was in a sane state and that she desperately needs help. Shortly after, Lisa contacts Kyle, who is an emotional wreck. In confession, Kyle reveals that she found out about the arrest from TMZ, and it was really a wake-up call that her sister is not okay. Although Kyle tells Lisa she doesn’t want to talk about it, Lisa tries to pry but is relatively unsuccessful.

Meanwhile, Yolanda is preparing to go to Cleveland, where she is undergoing a procedure to remove the silicon that has leaked into her body from her breast implants. Rightfully, Yolanda is emotional as she worries about the outcome of the surgery.

In the car ride, Yolanda’s (now ex) husband David jokes about manhandling her breasts the whole way to the airport. Yolanda lets out a polite giggle but is obviously not in the mood for David’s attempt at comedy.

Over in Beverly Hills, Erika is seen having lunch with her big time lawyer husband, Tom. While discussing which plane each of them are going to take out, they are surprised by a drop-in from the Beverly Hills Chief of Police. Erika proceeds to brag about her husband’s relationships with all the biggest political and legal figures in the area. After Tom and the Chief leaves, Erika breaks one of the biggest laws in town and indulges in a dessert, which triggers her to explain that she is not like the other housewives and isn’t afraid to eat more than salad.

Back in Philadelphia, Lisa is seen preparing for her QVC stint. She runs into designer Dennis Basso, who brags about designing Nicky Hilton’s bridesmaid dresses. Evidently, it is a small world in the lives of the real housewives. Shortly after, Lisa explains that she thinks of her customers as “Shirley” and envisions them when she is selling all of her products. Admittedly, Lisa has a pretty captivating, humorous quality to her, which makes her a pretty decent saleswoman.

In Cleveland, Yolanda video calls her daughter Gigi before she heads into surgery. Gigi, who is working in Australia, gives her well wishes. After, Yolanda tells David not to stress about her while she is in the operating room. David simply responds, “don’t worry, I won’t,” which seems that much worse now that we all know the fate of their relationship. The show does give viewers a brief glimpse into the operating room and shows a pretty graphic snap of Yolanda’s old, bloody silicon implant.

The episode concludes with the white party that is being thrown in Lisa V’s honor, in the Hamptons. Lisa is in her element, as the publication flies her out in a helicopter to the event. In confession, Lisa gushes over the magazine’s generous gesture of housing all of her housewife friends in a newly renovated hotel. Unfortunately, the hotel is not up to snuff for Kyle, Eileen and Lisa R. Thus, they pray that Lisa V will forgive them for ditching their set-up accommodations for a more glamorous home that Kyle’s husband/real estate mogul Mauricio found them to stay at.

Not too long after, Lisa V arrives at the venue, where she receives a note from the front desk that is from the other women saying that they decided to stay somewhere else. Lisa calls Eileen, who starts complaining about the non-stop partying and lack of room service at the pre-set hotel. Unfortunately, Lisa gets a bit offended by her friends’ actions and calls them “high maintenance.” It is definitely an accomplishment for the ladies to earn such a title from the diva herself.

The party kicks off with a bunch of elegantly dressed men and women chowing down on cupcakes with Lisa’s face on them.

Soon enough, Lisa R., Eileen and Kyle arrive at the party and sit down with the lady of the hour. Kyle proceeds to complain about her lack of sleep, which is partially because of the drama going on with her sister. Of course, this complaining opened up a window for the other women to ask as many questions as possible about Kim’s personal issues.

You can catch the next episode of Real Housewives of Beverly Hills on January 12 on Bravo.

Erika arrives at the Hamptons and finally meets Lisa Rinna, as well as reunites with the other housewives. In addition, Housewives of New York star Bethenny Frankel makes an appearance and unsurprisingly stirs up some more drama. Meanwhile, Eileen is taken back when Lisa V. grills her about her cheating past.