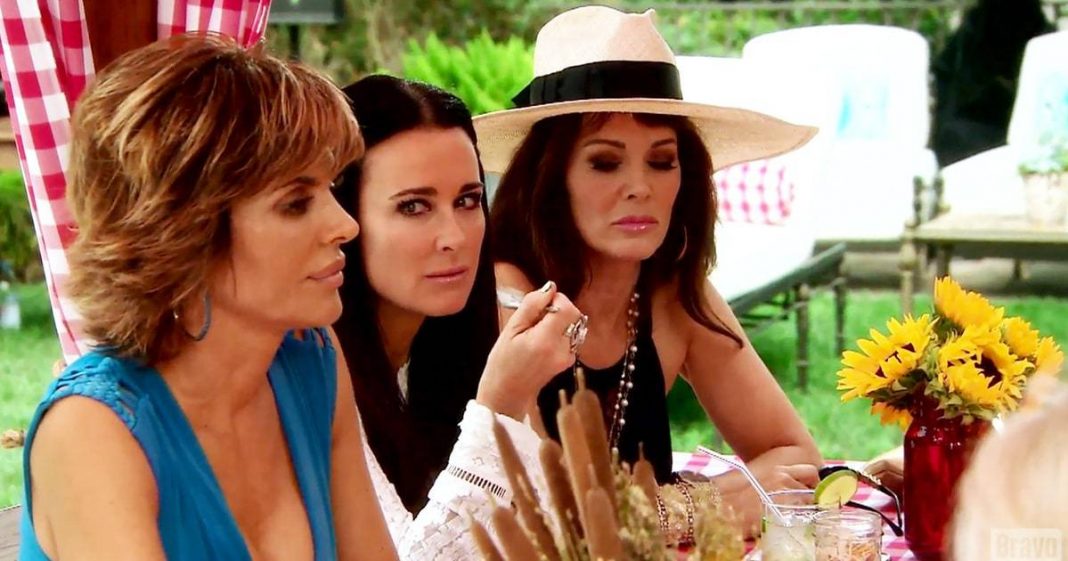 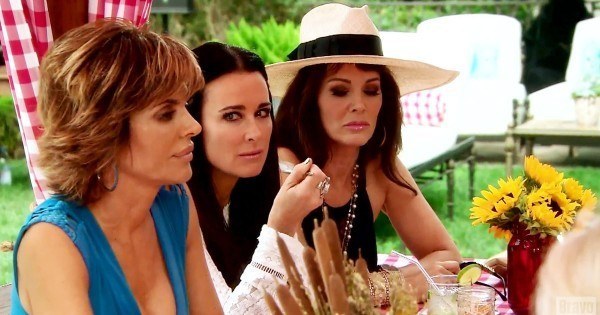 On this week’s episode of Real Housewives of Beverly Hills “Hearing Problems,” the ladies head over to newcomer Kathryn’s San Diego home. In addition, Kyle gets some advice about how to deal with Kim’s troubles and Munchausen Syndrome once again makes its way into the conversation at Erika’s pool party.

Following Erika’s performance (which was featured on last week’s episode), the ladies head over to Kathryn’s San Diego “party house.” The ladies all sit down for lunch, and immediately Eileen brings up the whole Yolanda fiasco that went down last night. Finally, Erika comes clean about being the one to blab to Yolanda but doesn’t seem to care that she just spent the last 24 hours swearing she didn’t – and that is why Erika is the reigning housewife of this season.

The conversation then transitions into being about the rumors that Lisa Rinna has faced for many years regarding a possible eating disorder. While Lisa R. shuts it down completely, Kathryn questions this as she feels Lisa doesn’t eat very much. In confessional, Kathryn says that often Lisa just pushes around her food, so she isn’t quite convinced the rumors are completely untrue. However, this snowballs into Lisa R. talking about Kim’s attack at her (which involved making a snide comment about her eating) while in Amsterdam last season. Even though yet again Kyle says that she doesn’t feel comfortable with the ladies talking about her sister, Kathryn cant help but egg on Lisa R. to talk more about the incident. Kyle ends up getting up and leaving the table, but the ladies continue to blab on about how “bizarre” and “scary” Kim was acting (with Kyle pretty much being forced to overhear it all). Kathryn then opens up about her experience with addiction, as it was unfortunately, the underlying cause for her father’s decision to commit suicide when she was just 13. 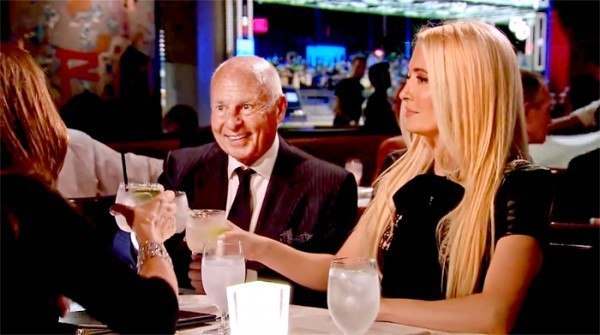 Back in Beverly Hills, Erika and her husband Tom invite Ken and Lisa V. to dinner. They actually hit it off really well, which is a bit surprising as both Lisa and Erika have very dominating personalities.

In a little former housewife reunion, Kyle joins Adrienne Maloof for lunch. Here, Kyle opens up about the struggle she is facing dealing with her sister.  Adrienne comforts her and advises her to be patient as many recovering addicts often have setbacks.

Next up, Erika makes sure to outdo Kyle’s “BBQ” by throwing a “real barbeque” (i.e. one that actually consists of barbequed food). She proceeds to get ready with all of her entourage, which she calls her “gay village” that helps her look fabulous.

Meanwhile, Kyle and Yolanda head to the party together. In the car Yolanda once again brings up the Munchausen thing that Lisa R. supposedly had been gossiping about with other people. Yolanda warns Kyle not to bring it up at the party, as it will most likely not end well for Lisa R. or herself. At the same time, Eileen and Lisa R. carpool together and Eileen reveals that she sat down with Yolanda a few days ago. Eileen goes on to tell Lisa R. that Yolanda was stating that she could have easily claimed Lisa R. was bipolar based on her actions in Amsterdam, but that she never would. Lisa R. is rightfully confused because by saying that she wouldn’t call her bipolar, Yolanda basically did just that. 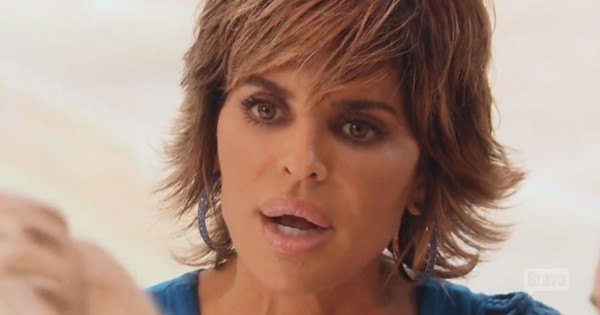 With carnival games, half naked men (one of which is a backup dancer for Katy Perry) and Erika-esque décor, Erika manages to overshadow Kyle’s BBQ by a long shot.

Even though Erika put a lot of effort into throwing a fun bash, there is obvious tension between the women. Lisa R. (and Eileen simply by association) seem to be on the outs, as Yolanda has some obvious built up anger towards Lisa R. and the accusations she has been making concerning her Lymes disease.

Inevitably, all of the ladies sit down at the picnic table and things begin to unravel. Lisa R. begins by expressing her love and support for Yolanda but criticizes her for not calling her if she still had an outright issue with her (instead of gossiping about her (Lisa R.) to Erika and Eileen). Yolanda dishes it right back stating, “after all the s*** you put out into the universe I have to call you…” While Yolanda has one of the calmest, most harmonious demeanors out of all the housewives, she proves she is not one to mess with. Lisa R. apologizes several times, but Yolanda states, “Sorry is not enough.”

Unfortunately, I feel like Yolanda’s built up rage is preventing her from actually understanding the situation. As Lisa R. explains it, she was having a conversation with someone who brought up Yolanda and Munchausen Syndrome. However, Lisa R. at the time did not know what it meant and eventually looked it up. Moreover, she never explicitly claimed that this is what Yolanda was battling.

Erika jumps in to the fight and defends Yolanda. She then yells at Lisa R. to tell them who brought up the syndrome in the first place, as Yolanda “has the right to confront her accuser.”

Fortunately, they finally come to an understanding and agree from this point forward they will stick up for Yolanda. With “bigger fish to fry,” Yolanda decides to forgive Lisa and the two hug it out. In confessional, Lisa R. admits that “hugging it out” didn’t feel appropriate as it felt like putting a Band-Aid on an injury that is gushing blood. Based on this (and the previews), this is not the end of the Munchausen Syndrome-related drama.

You can catch more Real Housewives of Beverly Hills when it airs next Tuesday, February 23 on Bravo.

Lisa Rinna appears on a radio talk show while the ladies incur more conflict regarding the whole Lisa R.-Yolanda situation.