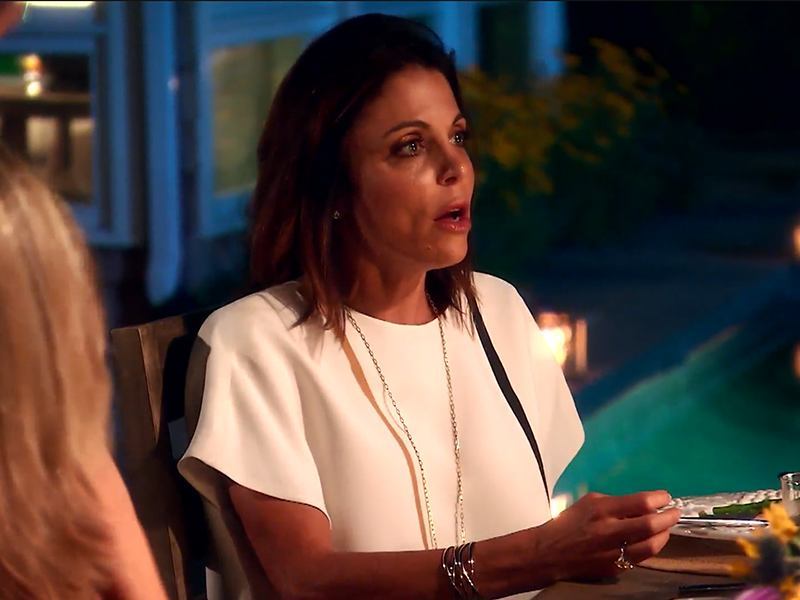 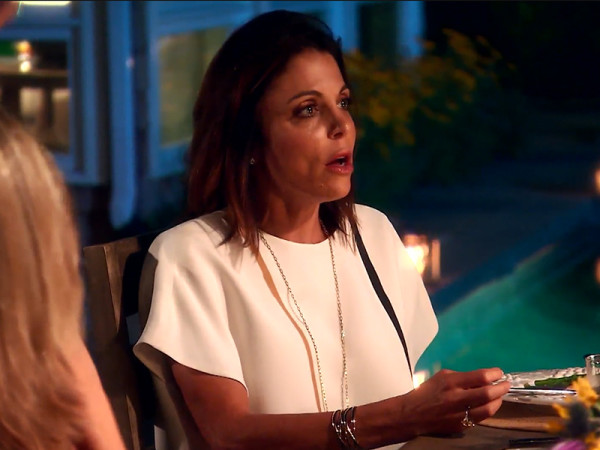 The ladies of Beverly Hills returned for a “Pretty Mess” this week, in the new episode of Real Housewives of Beverly Hills. Despite Yolanda being the one dealing with relationship drama in the headlines right now (it was revealed this week that she finalized her divorce from David Foster), this week’s episode had housewife Eileen Davidson [reluctantly] spilling all the details about her love life. In addition, viewers were in for an extra special treat, as Real Housewives of New York star Bethenny Frankel causes some friction amongst the BH ladies when she hosts a drama-filled dinner.

The episode kicks off right where last week’s ended, at the white party that was thrown in Lisa’s honor (by Bella magazine). The ladies sit down for dinner and quickly get into a conversation about divorce. Lisa R. begins talking about some mutual friends who are going through a nasty divorce. Eileen chimes in that she is shocked how two people who loved each other so much and had kids, could end up with such a bad, toxic relationship. Unfortunately, this opens the door for Lisa V. to passive-aggressively ask Eileen, “you have been divorced right?” This snowballs into Lisa V. grilling her about her affair, which Eileen had with her current husband (who was also married at the time to someone else). Needless to say, one-time bride Lisa V. is thoroughly enjoying herself, as she not-so-subtly judges Eileen’s infidelity and failed marriages.

The next day, Lisa V., Lisa R., Eileen, Kyle and Ken make their way to a local Hampton’s vineyard for a wine tasting. Here, Lisa R. reveals that she looked up Erika online to see what she is all about. Lisa then goes to show the other ladies Erika’s music video “PAINKILLR,” which Lisa admits makes her “uncomfortable” because it is so “raunchy.” Nonetheless, Lisa claims she is trying to be less judgmental and is excited to meet the evidently free-spirited Erika.

Back in Beverly Hills, Yolanda is getting cared for by her (now ex) husband David Foster as she recovers from her silicon breast implant removal surgery. It is so sad to hear Yolanda gush about how amazing David is and how she couldn’t imagine going through all of her health issues without him, as we all know the eventual outcome. Evidently, it must have been a really sudden decision for the two former lovebirds to end things; Although David does show glimpses of his insensitivity when he jokes to Lisa V. that Ken has “better tits” than Yolanda now – who at the time was bed ridden in pain from the tough operation.

Over on the east coast, Kyle goes early to Bethenny’s Hampton house. Immediately Bethenny dives straight into asking about Kyle’s family drama. Kyle gets super emotional when she explains how many lies and secrets have been circulating her family. Since Bethenny and Kyle have been friends for over 25 years, Kyle admits she is able to open up a bit more to her than the other ladies.

Later that evening the rest of the women make their way to Bethenny’s house. One of the first things Bethenny blurts out to Erika is, “I looked at your Instagram page – you want a rim job; I’ll give it to you.” Bethenny is good at many things, but being subtle and reserved is definitely not one of them.

All of the women continue to praise and just talk all about Erika, which she doesn’t seem to mind or be foreign to. However, it wouldn’t be a housewives dinner party if there weren’t some sort of drama and unfortunately a small spat erupts shortly after Bethenny advises Erika to “sculpt whatever [her] whole message is” and rebrand herself towards “female empowerment.” After Erika shows her the “PAINKILLR” music video, Bethenny proceeds to rip her apart, claiming that the video is “cheap” looking and has “low production value.” She goes on to say that the video is trying to be “avant garde but isn’t quite getting it.” At first, Erika tries to let it slide; however Bethenny is relentless and continues to criticize the video.

Unfortunately, Erika begins getting flustered by Bethenny’s abruptness. In confessional Erika complains, “I don’t know anything about margaritas. And I don’t know anything about being skinny. So I’m not going to tell anyone what to do with their Skinny Girl s***. So perhaps she shouldn’t tell me what to do with mine.” Despite being a bold, strong personality, Erika admits that she is shocked that Bethenny would welcome her into her home and then proceed to “s*** all over [her]” in front of the rest of the women. Nonetheless, I have to say that Erika handled herself a lot better than the majority of housewives that have encountered the wrath of Bethenny Frankel. Fortunately, the ladies seem to hash things over by the end of the dinner party and Erika even shows Bethenny a few of her sexy dance moves.

The next day, Eileen and Lisa R. start discussing the conversation that occurred at the white party. Eileen reveals that she felt incredibly uncomfortable when Lisa V. was grilling her about her past affair and failed marriages. Lisa R. advises Eileen to confront Lisa V. and let her know that she made her feel uncomfortable at the party.

Later on, Lisa V., Ken and Erika head over to the house where Kyle, Lisa R. and Eileen are staying. Here, Eileen pulls Lisa V. aside and confronts her about her badgering the other night. Unfortunately, Lisa V. finds a way to put the blame on Eileen and tells her she should have said something at the time. However, Lisa V. does half-heartedly apologize for “asking too many questions” – which is probably more than Eileen was expecting from the queen bee herself.

Bethenny is featured once again, as Erika confronts her about the dinner party drama. Eileen gets emotional, as she reveals a personal story to the other women. In addition, Yolanda reunites with Erika and discusses the situation with her health post-operation.

You can catch the next episode of Real Housewives of Beverly Hills next Tuesday, January 19 on Bravo.