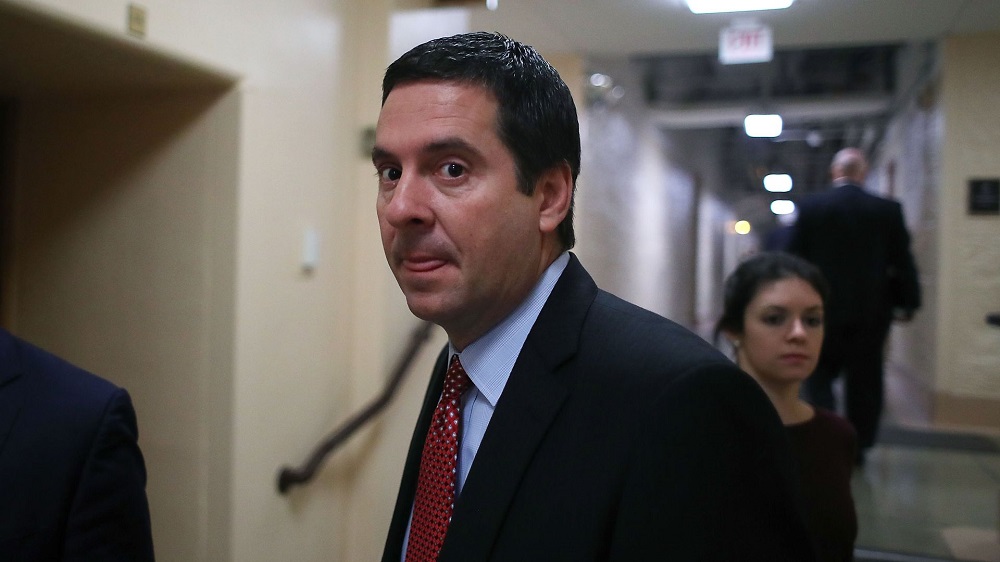 As expected, President Donald Trump allowed the Devin Nunes memo to be declassified and released to the public on Friday shorted after making harsh statements about the FBI on Twitter.

We’ll do a breakdown of the memo as many reading it will wonder what the big deal was actually all about. Nunes still has not answered the pointed question directed to him on Monday about whether his team had any help from the White House with this. You can be sure that question will surface for him again in a forum where he won’t be able to just not answer or say that ‘your time has run out.’

The top Leadership and Investigators of the FBI and the Justice Department have politicized the sacred investigative process in favor of Democrats and against Republicans – something which would have been unthinkable just a short time ago. Rank & File are great people!

“You had Hillary Clinton and the Democratic Party try to hide the fact that they gave money to GPS Fusion to create a Dossier which was used by their allies in the Obama Administration to convince a Court misleadingly, by all accounts, to spy on the Trump Team.” Tom Fitton, JW

After plenty of consternation — including a public rebuke from the FBI and cries of foul from Democrats — the GOP memo on the Russia investigation has been released.

The full memo was crafted by Republican staffers to House intelligence committee Chairman Devin Nunes (R-Calif.) and alleges surveillance abuses by law enforcement against former Trump campaign aide Carter Page. GOP members of the committee voted to release it on a party-line vote, and the White House later signed off on that decision.

Law enforcement argued that its release jeopardizes classified information, on which the memo is based, and sets a dangerous precedent. They also contend it omits key information. Other opponents allege the memo is thinly veiled political attempt to undermine the Russia investigation, special counsel Robert S. Mueller III and Deputy Attorney General Rod J. Rosenstein, who is overseeing Mueller’s probe.

Below is the memo in full. 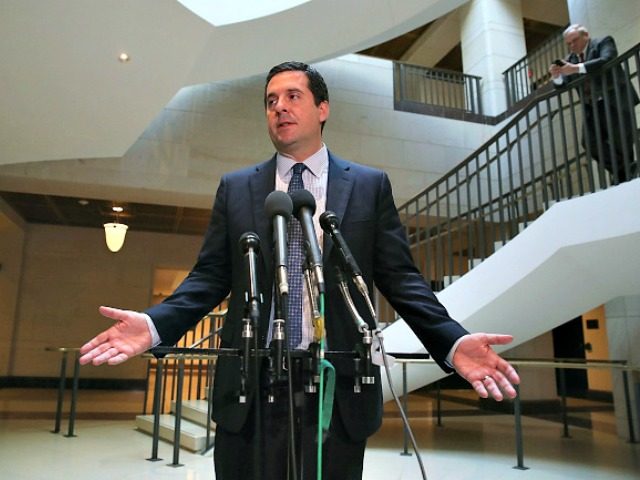 On January 29, 2018, the House Permanent Select Committee on Intelligence (hereinafter “the Committee”) voted to disclose publicly a memorandum containing classified information provided to the Committee in connection with its oversight activities (the “Memorandum,” which is attached to this letter). As provided by clause 11(g) of Rule of the House of Representatives, the Committee has forwarded this Memorandum to the President based on its determination that the release of the Memorandum would serve the public interest.

The Constitution vests the President with the authority to protect national security secrets from it disclosure. As the Supreme Court has recognized, it is the President’s responsibility to classify, declassify, and control access to information bearing on our intelligence sources and methods and national defense. See, Dep of Navy v. Egan, 484 US. 518, 527 (1988). In order to facilitate appropriate congressional oversight, the Executive Branch may entrust classified information to the appropriate committees of Congress, as it has done in connection with the Committee’s oversight activities here. The Executive Branch does so on the assumption that the Committee will responsibly protect such classified information, consistent with the laws of the United States.

The Committee has now determined that the release of the Memorandum would be appropriate. The Executive Branch, across Administrations of both parties, has worked to accommodate congressional requests to declassify specific materials in the public interest. However, public release of classified information by unilateral action of the Legislative Branch is extremely rare and raises significant separation of powers concerns. Accordingly, the Committee’s request to release the Memorandum is interpreted as a request for declassification pursuant to the President’s authority.

The President understands that the protection of our national security represents his highest obligation. Accordingly, he has directed lawyers and national security staff to assess the declassification request, consistent with established standards governing the handling of classified information, including those under Section 3.1(d) of Executive Order 13526. Those standards permit declassification when the public interest in disclosure outweighs any need to protect the information. The White House review process also included input from the Office of the Director of National Intelligence and the Department of Justice. Consistent with this review and these standards, the President has determined that declassification of the Memorandum is appropriate.

Based on this assessment and in light of the significant public interest in the memorandum, the President has authorized the declassification of the Memorandum. To be clear, the Memorandum reflects the judgments of its congressional authors. The President understands that oversight concerning matters related to the Memorandum may be continuing. Though the circumstances leading to the declassification through this process are extraordinary, the Executive Branch stands ready to work with Congress to accommodate oversight requests consistent with applicable standards and processes, including the need to protect intelligence sources and methods.

cc: The Honorable Paul Ryan
Speaker of the House of Representatives

Declassified by order of the President
February 2, 2018

To: HPSCI Majority Members
From: HPSCI Majority Staff
Subject: Foreign Intelligence Surveillance Act Abuses at the Department of Justice and the Federal Bureau of Investigation

This memorandum provides Members an update on significant facts relating to the Committee’s ongoing investigation into the Department of Justice (DOJ) and Federal Bureau of Investigation (FBI) and their use of the Foreign Intelligence Surveillance Act (FISA) during the 2016 presidential election cycle. Our findings, which are detailed below, 1) raise concerns with the legitimacy and legality of certain DOJ and FBI interactions with the Foreign Intelligence Surveillance Court (FISC), and 2) represent a troubling breakdown of legal processes established to protect the American people from abuses related to the FISA process.

On October 21, 2016, DOJ and FBI sought and received a FISA probable cause order (not under Title VII) authorizing electronic surveillance on Carter Page from the FISC. Page is a US citizen who served as a volunteer advisor to the Trump presidential campaign. Consistent with requirements under FISA, the application had to be first certified by the Director or Deputy Director of the FBI. It then required the approval of the Attorney General, Deputy Attorney General (DAG), or the Senate-confirmed Assistant Attorney General for the National Security Division.

The FBI and DOJ obtained one initial FISA warrant targeting Carter Page and three FISA renewals from the FISC. As required by statute (50 U.S.C. 1805(d)(1)), a FISA order on an American citizen must be renewed by the ISC every 90 days and each renewal requires a separate finding of probable cause. Then-Director James Comey signed three FISA applications in question on behalf of the FBI, and Deputy Director Andrew McCabe signed one. Sally Yates, then-Acting DAG Dana Boente, and DAG Rod Rosenstein each signed one or more FISA applications on behalf of DOJ.

Due to the sensitive nature of foreign intelligence activity, FISA submissions (including renewals) before the ISC are classified. As such, the public’s confidence in the integrity of the FISA process depends on the court’s ability to hold the government to the highest standard — particularly as it relates to surveillance of American citizens. However, the rigor in protecting the rights of Americans, which is reinforced by 90-day renewals of surveillance orders, is necessarily dependent on the government’s production to the court of all material and relevant facts. This should include information potentially favorable to the target of the FISA application that is known by the government. In the case of Carter Page, the government had at least four independent opportunities before the FISC to accurately provide an accounting of the relevant facts. However, our findings indicate that, as described below, material and relevant information was omitted.

1) The “dossier” compiled by Christopher Steele (Steele dossier) on behalf of the Democratic National Committee (DNC) and the Hillary Clinton campaign formed an essential part of the Carter Page FISA application. Steele was a longtime FBI source who was paid over $160,000 by the DNC and Clinton campaign, via the law firm Perkins Coie and research firm Fusion GPS, to obtain derogatory information on Donald Trump’s ties to Russia.

2) The Carter Page FISA application also cited extensively a September 23, 2016, Yahoo News article by Michael Isikoff, which focuses on Page’s July 2016 trip to Moscow. This article does not corroborate the Steele dossier because it is derived from information leaked by Steele himself to Yahoo News. The Page FISA application incorrectly assesses that Steele did not directly provide information to Yahoo News. Steele has admitted in British court filings that he met with Yahoo News — and several other outlets – in September 2016 at the direction of Fusion GPS. Perkins Coie was aware of Steele’s initial media contacts because they hosted at least one meeting in Washington DC. in 2016 with Steele and Fusion GPS where this matter was discussed.”

3) Before and after Steele was terminated as a source, he maintained contact with DOJ via then-Associate Deputy Attorney General Bruce Ohr, a senior DOJ official who worked closely with Deputy Attorneys General Yates and later Rosenstein. Shortly after the election, the FBI began interviewing Ohr, documenting his communications with Steele. For example, in September 2016, Steele admitted to Ohr his feelings against then-candidate Trump when Steele said he “was desperate that Donald Trump not get elected and was passionate about him not, being president.” This clear evidence of Steele’s bias was recorded by Ohr at the time and subsequently in official FBI files – but not reflected in any of the Page FISA applications.

4) According to the head of the counterintelligence division, Assistant Director Bill Priestap, corroboration of the Steele dossier was in its “infancy” at the time of the initial Page FISA application. After Steele was terminated, a source validation report conducted by an independent unit within FBI assessed Steele’s reporting as only minimally corroborated. Yet, in early January 2017, Director Comey briefed President-elect Trump on a summary of the Steele dossier, even though it was — according to his June 2017 testimony – “salacious and unverified.” While the FISA application relied on Steele’s past record of credible reporting on other unrelated matters, it ignored or concealed his
anti-Trump financial and ideological motivations. Furthermore, Deputy Director McCabe testified before the Committee in December 2017 that no surveillance warrant would have been sought from the FISC without the Steele dossier information.

5) The Page FISA application also mentions information regarding fellow Trump campaign advisor George Papadopoulos, but there is no evidence of any cooperation or conspiracy between Page and Papadopoulos. The Papadopoulos information triggered the opening of an FBI counterintelligence investigation in late July 2016 by FBI agent Pete Strzok. Strzok was reassigned by the Special Counsel’s Office to FBI Human Resources for improper text messages with his mistress, FBI Attorney Lisa Page (no known relation to Carter Page), where they both demonstrated a clear bias against Trump and in favor of Clinton, Whom Strzok had also investigated. The Strzok/Lisa Page texts also reflect extensive discussions about the investigation, orchestrating leaks to the media, and include a meeting with Deputy Director McCabe to discuss an “insurance” policy against President Trump’s election.