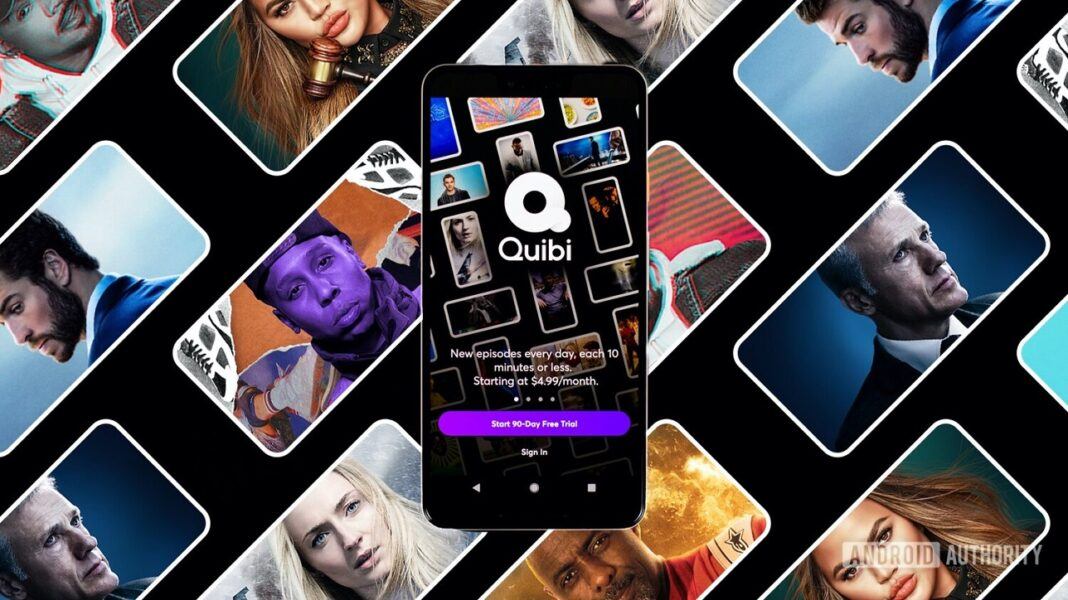 Six months is barely enough time to get people to know your producer or service, but Jeffrey Katzenberg’s Quibi is shutting down after that short period of time. The service had raised close to $2 billion dollars and burned through all of that Hollywood heavy hitter investment. They were unable to find a buyer looking for a discount after news hit yesterday about the company’s problems.

Katzenberg and partner Meg Whitman wrote an open letter to Quibi’s staff, investors and partners that “we feel that we’ve exhausted all our options.”

The letter is below:

An open letter to the employees, investors, and partners who believed in Quibi and made this business possible —

We started with the idea to create the next generation of storytelling and because of you, we were able to create and deliver the best version of what we imagined Quibi to be. So it is with an incredibly heavy heart that today we are announcing that we are winding down the business and looking to sell its content and technology assets.

Quibi was a big idea and there was no one who wanted to make a success of it more than we did. Our failure was not for lack of trying; we’ve considered and exhausted every option available to us.

While the result was not what any of us wanted, we did accomplish a number of things and we are very proud of what the talented Quibi team has built with the blood, sweat, and tears that they poured into this business over these past two years.

We opened the door to the most creative and imaginative minds in Hollywood to innovate from script to screen and the result was content that exceeded our expectations. We challenged engineers to build a mobile platform that enabled a new form of storytelling — and they delivered a groundbreaking and delightful service. And we were joined by ten of the most important advertisers in the world who enthusiastically embraced new ways for their brands to tell their stories.

With the dedication and commitment of our employees and the support we received from our investors and partners, we created a new form of mobile-first premium storytelling.

And yet, Quibi is not succeeding. Likely for one of two reasons: because the idea itself wasn’t strong enough to justify a standalone streaming service or because of our timing.

Unfortunately, we will never know but we suspect it’s been a combination of the two. The circumstances of launching during a pandemic is something we could have never imagined but other businesses have faced these unprecedented challenges and have found their way through it. We were not able to do so.

Which brings us to this moment. As entrepreneurs our instinct is to always pivot, to leave no stone unturned — especially when there is some cash runway left — but we feel that we’ve exhausted all our options. As a result we have reluctantly come to the difficult decision to wind down the business, return cash to our shareholders, and say goodbye to our colleagues with grace. We want you to know we did not give up on this idea without a fight.

Our goal when we launched Quibi was to create a new category of short-form entertainment for mobile devices. Although the circumstances were not right for Quibi to succeed as a standalone company, our team achieved much of what we set out to accomplish, and we are tremendously proud of the award-winning and innovative work that we have produced, both in terms of original content and the underlying technology platform. Over the coming months we will be working hard to find buyers for these valuable assets who can leverage them to their full potential.

We want you to know that we got up every day and genuinely loved coming to work with the most remarkable and passionate team that we have ever assembled. We will be forever proud of the extraordinary partnership we were able to forge between the best of Hollywood and Silicon Valley.

All that is left now is to offer a profound apology for disappointing you and, ultimately, for letting you down. We cannot thank you enough for being there with us, and for us, every step of the way.

There had been plenty of skepticism around the company since it began, but it didn’t stop high-profile investments from pouring into the startup. Many streaming services have gained from the pandemic, but Quibi opened a month into it. Katzenberg wanted to test a theory that viewers would pay to watch slices of dramas and unscripted shows while waiting in line at the coffeeshop. It was a very expensive theory, but it sounds similar to the streaming feeds you see while gassing up your car at the local BP or Shell station. What was originally projected to be 7 million subscribers turned out to be less than 2 million.

Quibi Holdings LLC is shutting down a mere six months after launching its streaming service, a crash landing for a once highly touted startup that attracted some of the biggest names in Hollywood and had looked to revolutionize how people consume entertainment.

The streaming service, which served up shows in 5- to 10-minute “chapters” formatted to fit a smartphone screen, has been plagued with problems since its April debut, facing lower-than-expected viewership and a lawsuit from a well-capitalized foe, Hedge-Fund giant Elliott Management.

“Our failure was not for lack of trying,” founder Jeffrey Katzenberg and Chief Executive Meg Whitman said in an open letter to employees and investors. “We’ve considered and exhausted every option available to us.”

Mr. Katzenberg and Ms. Whitman decided to shut down the company in an effort to return as much capital to investors as possible instead of trying to prolong the life of the company and risk losing more money, according to people familiar with the matter.

Employees will be laid off and will be paid a severance, the people said, and Quibi will explore selling the rights to some of its content to other media and technology companies.

During a video call with employees Wednesday, an emotional Mr. Katzenberg suggested Quibi staffers listen to the song “Get Back Up Again,” sung by actress Anna Kendrick in the animated film “Trolls,” to buoy their spirits, according to people familiar with the call.

The decision marks a disappointing turn of events for Mr. Katzenberg, a former Walt Disney Co. executive and DreamWorks co-founder who pitched the streaming service as a revolutionary new entrant to the video-streaming wars.

Quibi was designed for people who consume entertainment in short increments on their smartphones, but the coronavirus pandemic forced would-be subscribers away from the kinds of on-the-go situations Quibi executives envisioned for its users. Quibi eventually allowed subscribers to watch its shows on their televisions.

Even before the Covid-19 crisis, Quibi had its share of skeptics in the media world, because consumers already had free options for short-form video, such as Alphabet Inc.’s YouTube. Quibi’s bet was that it could charge subscriptions by creating higher-end content, and it paid handsomely to develop that programming. Some Quibi executives believed the venture could have been a success, if not for the pandemic, with better execution, pointing to the rise of TikTok, people close to the company said. Some of them believed, for example, that Quibi could pivot to what is known as a freemium model, offering some content free while making customers pay for the top programming.

Quibi, which cost $4.99 a month, also had to compete with a growing number of rivals, with launches of Walt Disney’s Disney+, Apple Inc.’s Apple TV+, AT&T Inc.’s HBO Max and Comcast Corp.’s Peacock all occurring in the past year.

In Wednesday’s letter, Mr. Katzenberg and Ms. Whitman said there were “one or two reasons” for Quibi’s failure: The idea behind Quibi either “wasn’t strong enough to justify a stand-alone streaming service” or the service’s launch in the middle of a pandemic was particularly ill-timed.

“Unfortunately, we will never know, but we suspect it’s been a combination of the two,” they said.

Much of Hollywood was doubtful Quibi would succeed but was willing to sell content to the service. Some large media companies, including AT&T’s WarnerMedia and ViacomCBS Inc., agreed to invest in the platform. Overall, Quibi raised about $1.75 billion from high-profile investors which also included Disney and Comcast’s NBCUniversal.

In a conference call with investors earlier Wednesday, Mr. Katzenberg said the company decided to return $350 million in capital rather than pursue a new strategy that could have attracted additional subscribers but would have required a hefty investment, according to a person familiar with the call.

The company spent aggressively to develop its content. Its lineup of star-studded programming included a court show featuring Chrissy Teigen, a romantic comedy with Anna Kendrick and an action thriller starring Christoph Waltz and Liam Hemsworth.

“Quibi made the classic mistake of getting too wrapped up in a product vision—videos on the phone—and forgetting about the customer,” said Tien Tzuo, CEO of Zuora, a subscription-management company. “They had great artists and storytellers, and the short-form approach had a lot of promise, just look at the success of TikTok.”

The streaming service attracted blue-chip advertisers including PepsiCo Inc., Walmart Inc. and Anheuser-Busch InBev SA, securing about $150 million in ad revenue in the run-up to its launch. Those deals came under strain earlier this year amid lower-than-expected viewership for Quibi’s shows, prompting advertisers to defer their payments.

In recent weeks, Quibi hired a restructuring firm, AlixPartners LLP, to evaluate its options, the people said. It recommended the options to the board of directors this week, laying out a list that included shutting the company down.

AlixPartners didn’t respond to a request for comment. The firm previously handled the bankruptcy of Enron Corp., General Motors Co. and Kmart.

The Information earlier reported that Mr. Katzenberg told people in the media industry he might have to shut down the company.

The decision to hire AlixPartners came after starting a process to sell the company, Movie TV Tech Geeks reported. Quibi pitched suitors including NBCUniversal on a sale, according to people familiar with the matter, but would-be buyers were put off by the fact that Quibi doesn’t own many of the shows it puts on its platform.

Quibi is also fighting a legal battle with interactive-video company Eko, which claims Quibi is violating its patents and has stolen trade secrets. Hedge fund Elliott Management Corp. is financing the patent lawsuit.

The fight centers on a key feature of Quibi’s app that plays different videos for users depending on whether they are holding their phone horizontally or vertically. In a statement Thursday, Eko’s lawyer Neel Chatterjee said Eko has “put Quibi on notice that it cannot simply wind down its business, send its investors hundreds of millions of dollars and sell its stolen technology to a third party without first resolving its issues with Eko.”