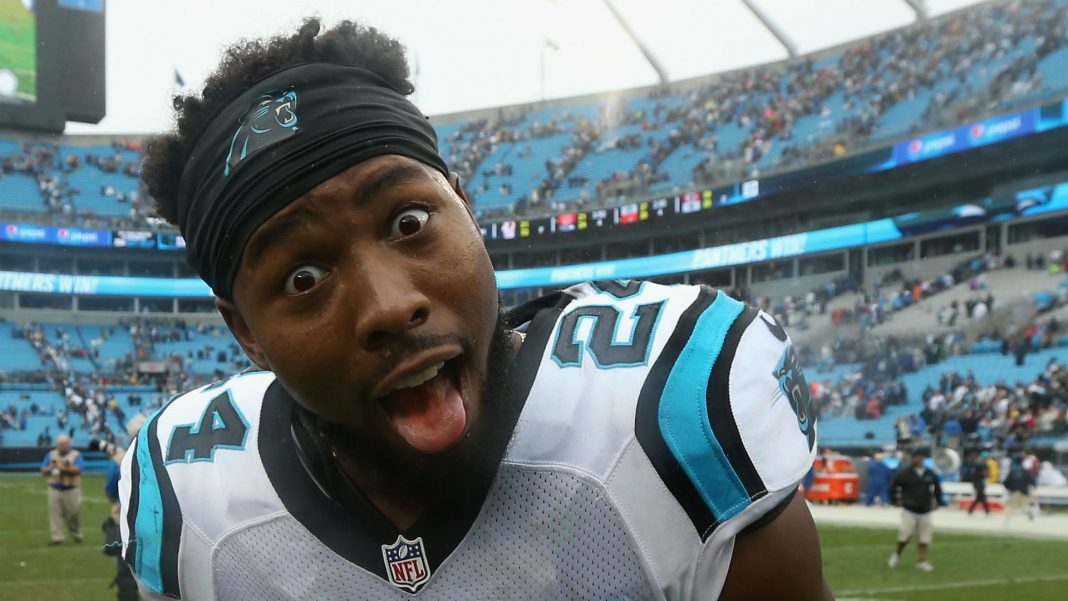 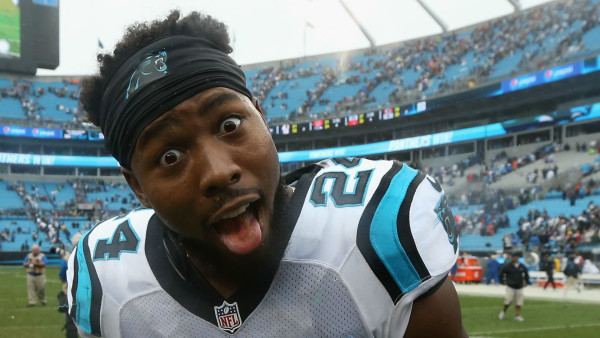 NFL Grown Man of the Week: Josh Norman is the best defensive hack in the League right now. This man is shutting star receivers out like it’s his birthright. Odell Beckham was Norman’s latest victim on Sunday as Carolina held off the Giants to go to 14-0. Norman had ODB so rattled that the wide out nearly got himself ejected for swinging on the Carolina corner. Norman could very well win defensive player of the year with one more game against Julio Jones coming up next week.

NFL Child of the Week: Odell Beckham is a great receiver. A great tactical fighter he is not. Pretty dumb to swing on a helmeted Josh Norman. Even worse idea to fly into the guy helmet to helmet. Great way to injure his own hands and or head, both of which make him a nice living in the world of pro football.

Receivers and corners are known to get into it after too much trash talking, but Beckham is too important to his team to be getting penalized and taking chances on getting ejected.

Winner: Told you, Kirk Cousins had a shot at being elite. He’s not there yet, but he did throw four touchdowns and ran for another against Buffalo in a big win that kept Washington in the hunt to win the NFC East.

Loser: Buffalo will miss the playoffs with the loss to the Redskins, marking the 16th year in a row they will not enter the postseason. Rex Ryan’s defense just hasn’t delivered as of yet. The offense has been more than capable, though.

Winner: Are eight wins in a row any good? Kansas City has quietly rolled up quite a record after a horrible start to the year. They’ve done it without their star running back and without much help from their much hyped tight end.

Loser: San Diego fans look to be out of luck. According to reports, the Chargers have the most support among owners to be able to move to Los Angeles.

Winner: Cam Newton and his crew of Panthers have moved to 14-0 with a big win over the Giants. The Carolina passer had another epic day in the air, throwing for 340 yards on his way to a five touchdown performance. Cam has led his team to just the fourth 14-0 start in NFL history, joining the 72 Dolphins, 2007 Pats, and the 2009 Colts.

Loser: Dallas finally got eliminated from the playoffs, so it’s official. Now maybe the big TV networks can give it a rest with America’s team. Yeah right!

Winner: My Falcons finally got a win after six awful weeks of losing. This game could have gone the other way at the end, but Jacksonville couldn’t make a couple of plays in key situations.

Loser: Blake Bortles went Matt Ryan with a bad pick in the red zone at the end of the first half against Atlanta. That was a big point swing and at the end of the game, Bortles missed on a big pass to Hurns that could have turned into the go ahead TD catch.

Winner: AJ McCarron did his job and more against San Francisco in relief of Andy Dalton. The former Bama star did what was asked of him, managing the game well while not turning the ball over.

Loser: Miami was embarrassed by the Chargers 30-14 and it wasn’t even that close. Ryan Tannehill has a long way to go before becoming worthy of the hefty contract he signed over the summer.

Winner: Eric Weddle signed autographs for over two hours after what was likely his team’s last game in San Diego. Acts like this show that some pro athletes actually get it, and it’s what makes fans look past some of the idiotic behavior of other athletes. It’s the love of the game. 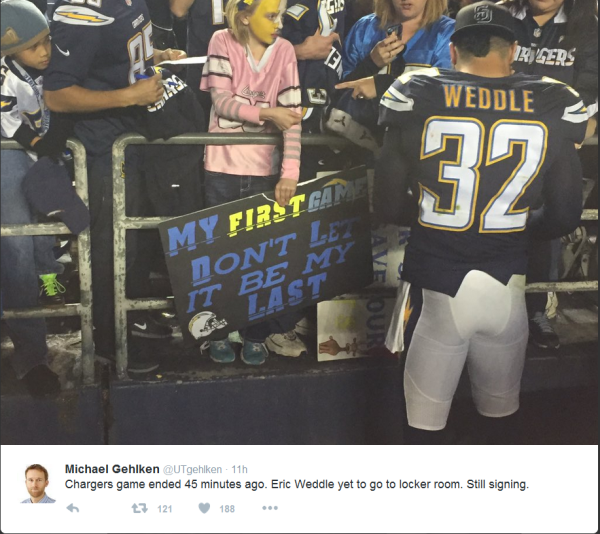 Loser: Blaine Gabbert came back to reality after going on a nice run for several weeks. Against a Bengals team without Andy Dalton, Gabbert was unable to keep pace with AJ McCarron and his Niners got beat as Gabbert flung three interceptions.

Winner: The Patriots defense feasted on Tennessee with five sacks and two picks to make some fantasy owners very happy. With another Denver loss,  the Pats only need to worry about Cincinnati when it comes to home field positioning.

Loser: Speaking of Denver, how about Vernon Davis. The guy comes over from San Fran only to grow alligator arms. He had a costly drop last week and yesterday against Pittsburgh he could have helped his young QB on a crucial drive had he had some courage over the middle.

Winner: I cannot let this edition of winners losers finish without mentioning the biggest winner of the weekend, Brandon Weeden. Dude could not prostitute himself for a win in Dallas, yet took his Texans to victory over the Colts in relief of TJ Yates. Weeden had 105 yards passing and tossed a touchdown for the win that kept them in playoff contention.

Loser: Marcus Mariota was knocked out of the Patriots game after getting roughed up early and often. The rookie was sacked three times on just six dropbacks and was replaced by Zach Mettenberger after hurting his knee. Kid has taken a beating this year, getting sacked 38 times so far which is fourth worst in the NFL.

Winner: Teddy Bridgewater did his Cam Newton impression yesterday against the Bears, running for one score and throwing four TD passes. Not a bad individual effort that helped his team stay in the playoff hunt.

Loser: Brock Osweiler had a nice game with three touchdowns go to waste as Big Ben and the Pittsburgh offense just kept coming. This shootout was one of the best games of the day and showed just how potent the Steelers offense is right now. It’s not easy to score 34 points on this Denver defense.

Winner: The Steelers offense once again. This team is going to be two things in the postseason should they make it to the dance; dangerous and fun to watch. Pitt sits in the sixth seed right now.