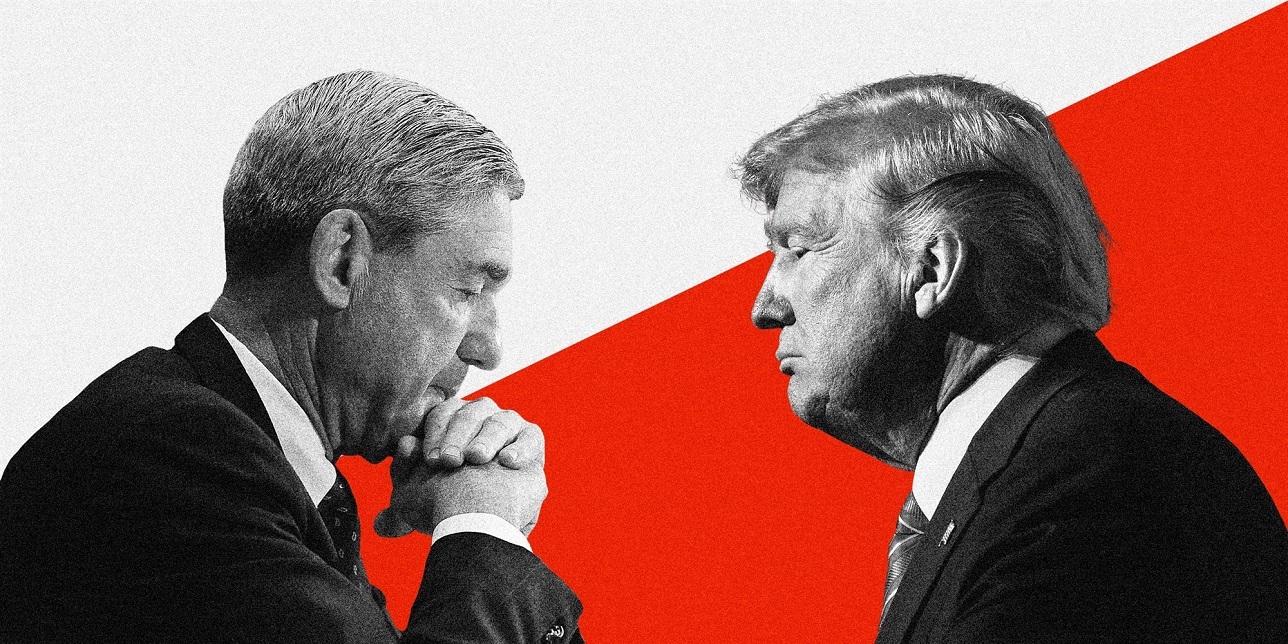 Attorney General William Barr worked to paint a rosy picture of Donald Trump Thursday morning hours before the Robert Mueller report was released, things are looking much different now. You can read the full Mueller report here to see how wrong Barr was. Beware: if you plan on printing this out, be ready to replace that ink cartridge as there are plenty of redacted pages.

Barr has stated that a version of special counsel Robert Mueller’s report with fewer redactions will be made available to a small group of lawmakers.

In a letter to Congress on Thursday, Barr says the second version of the report would be given to the “Gang of Eight,” the top-ranking House and Senate lawmakers from both parties who can view sensitive classified information. The chairs and ranking members of the House and Senate judiciary committees will also receive it.

Barr said all redactions would be removed from that version of the report except those relating to grand-jury information.

The attorney general said, “I do not believe that I have discretion to disclose grand-jury information to Congress. Nevertheless, this accommodation will allow you to review the bulk of the redacted material for yourselves.”

Public at last, special counsel Robert Mueller’s report revealed to a waiting nation Thursday that President Donald Trump had tried to seize control of the Russia probe and force Mueller’s removal to stop him from investigating potential obstruction of justice by the president.

The report said that in June 2017, Trump directed White House Counsel Don McGahn to call the acting attorney general and say that Mueller must be ousted because he had conflicts of interest.

McGahn refused — deciding he would rather resign than trigger what he regarded as a potential Saturday Night Massacre of Watergate firings fame.

For all of that, Mueller said in his report that he could not conclusively determine that Trump had committed criminal obstruction of justice.

The Justice Department posted a redacted version of the report online Thursday morning, 90 minutes after Attorney General William Barr offered his own final assessment of the findings.

The two-volume, 448-page report recounts how Trump repeatedly sought to take control of the Russia probe.

Mueller evaluated 10 episodes for possible obstruction of justice, including Trump’s firing of FBI Director James Comey, the president’s directive to subordinates to have Mueller fired and efforts to encourage witnesses not to cooperate.

The president’s lawyers have said Trump’s conduct fell within his constitutional powers, but Mueller’s team deemed the episodes deserving of criminal scrutiny.

Mueller reported that Trump had been agitated at the special counsel probe from its earliest days, reacting to Mueller’s appointment by saying it was the “end of his presidency.”

As for the question of whether the Trump campaign had colluded with Russia during the 2016 presidential campaign, Mueller wrote, “While the investigation identified numerous links between individuals with ties to the Russian government and individuals associated with the Trump Campaign, the evidence was not sufficient to support criminal charges.”

Mueller also said there wasn’t sufficient evidence to charge any campaign officials with working as an unregistered foreign agent of Russia.

The report included an appendix that contained 12 pages of Trump’s written responses to the special counsel. They included no questions about obstruction of justice, as was part of an agreement with Trump’s legal team.

Trump told Mueller he had “no recollection” of learning in advance about the much-scrutinized Trump Tower meeting between campaign officials and a Russian lawyer. He also said he had no recollection of knowledge about emails setting up the meeting that promised dirt on Hillary Clinton’s campaign.

He broadly denied knowing of any foreign government trying to help his campaign, including the Russian government. He said he was aware of some reports that Russian President Vladimir Putin had made “complimentary statements” about him.

Trump said that his comment during a 2016 political rally asking Russian hackers to help find emails scrubbed from Clinton’s private server was made “in jest and sarcastically” and that he did not recall being told during the campaign of any Russian effort to infiltrate or hack computer systems.

Trump’s legal team called the results “a total victory for the president.”

“Though we can understand the enthusiasm for ‘Game of Thrones‘ now that the final season has arrived, we still prefer our intellectual property not be used for political purposes,” said HBO in response to the president’s meme.

In response to Thursday morning’s press conference on the Mueller report, President Trump once again invoked Game of Thrones.

Tweeting a meme inspired by the hit HBO fantasy saga, Trump’s post resembled the title font of Game of Thrones and contained the message: “No collusion. No obstruction. For the haters and the radical left Democrats — Game Over.” The meme also included a picture of Trump.

Attorney General William Barr discussed the Mueller report on Russian meddling in the 2016 election on Thursday ahead of the public release, announcing that the special counsel found “no evidence of Trump campaign collusion with the Russian government’s hacking.”

“Though we can understand the enthusiasm for Game of Thrones now that the final season has arrived, we still prefer our intellectual property not be used for political purposes,” said HBO in a statement to media outletson Thursday.

Trump’s Twitter reply reiterated his approval of the long-awaited findings.

Over on NBC News, White House correspondent Hallie Jackson called Trump’s reaction to the news conference a “pre-report release victory lap,” noting that the president “clearly liked what he saw” from Barr.

“As we were watching it, I couldn’t help but think that the President must be thrilled and it appears he is,” said Jackson. “He is tweeting now, a riff off of the popular television show Game of Thrones writing simply, ‘game over.’… This is the President’s pre-report release victory lap, if you will. His administration is clearly trying to set what they believe is the narrative for this even before anybody … has had the chance to see the content of the report itself.”

Trump first borrowed the HBO trademark late last year when the president delivered a warning to Iran about reimposing all U.S. sanctions that had been lifted under the 2015 nuclear deal. The meme warned, “Sanctions are coming,” a reference to the famous phrase from the series, “Winter is coming.”

“We were not aware of this messaging and would prefer our trademark not be misappropriated for political purposes,” said HBO in a statement at the time to media outlets.

In the months since Trump started using Game of Thrones inspired imagery, HBO has taken no formal legal action. If claims of trademark dilution or infringement of trade dress were pursued, Trump would likely defend his posts as fair use of intellectual property in a culture where memes have spread wildly on social media.

The final season of Game of Thrones is currently airing on HBO.