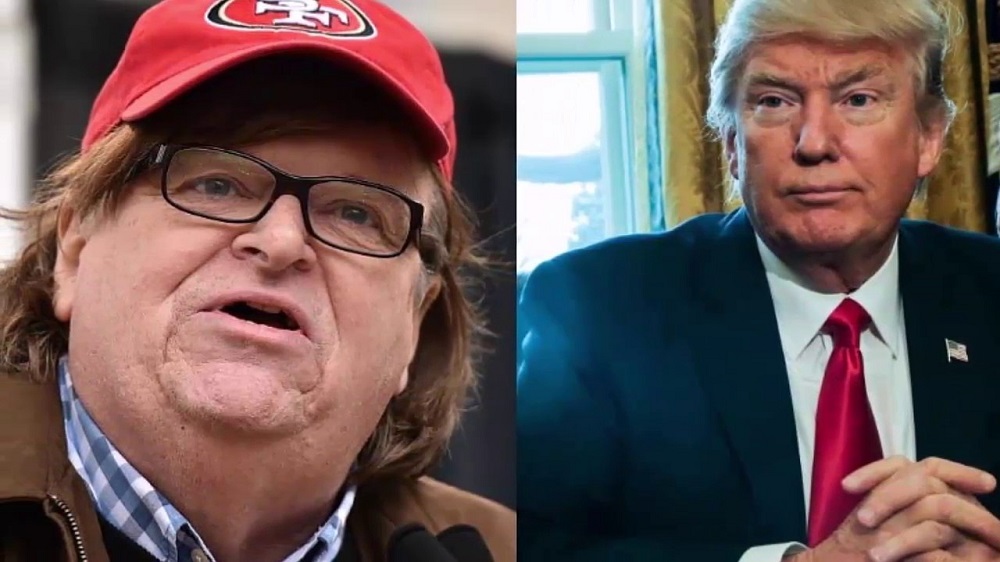 It sounds like a scene that’s right out of a horror movie: Michael Moore wants to “discombobulate” Donald Trump. With that phrase I was thinking of a scene like the end of 1995’s “Braveheart” movie. However thoughts of gore and torture ceased when I stopped using a private definition of “discombobulate” and looked up the universal one: turns out that all “discombobulate” means is “to confuse” someone.

Michael Moore outlined a step-by-step sequence at his Facebook page on Wednesday titled “HOW TO STOP TRUMP.” In the post, Moore lists several calls to action. He recommends phoning congress every day, going to town hall meetings, joining forces with friends for “RAPID RESPONSE,” and several other strategies for effecting political change on the American landscape. Lastly, Moore advises people to “JOIN THE ARMY OF COMEDY” because Trump has “massively thin skin.” According to Moore:

“I truly believe the final tipping point for Trump will be when he implodes from all the laughter — the mocking, the unbearable ridicule of tens of millions of Americans that will discombobulate him and force him out of the White House” (February 22nd).

On the comedy front, Trump certainly doesn’t seem to be a fan of Saturday Night Live. I don’t know if he was before he became president, but he has to be less of a fan now that Alec Baldwin is doing his part to “discombobulate” Trump. The actor has portrayed Trump in numerous skits over the last few months, all of which have lampooned Trump either as president or president-elect. Trump sidekicks Steve Bannon and Kellyanne Conway haven’t exactly been portrayed too favorably either.

There has been a lot of discussion in the media about Trump’s reaction to being made of fun, discussion that would suggest that Moore is right when it comes to trying to discombobulate the president. Deadline’s Greg Evans wrote an article in early December titled “Donald Trump Still Hates Alec Baldwin’s ‘SNL’ Impression” (December 3rd). More recently, Motherjones.com talked about the SNL skit where Steve Bannon was portrayed as Death: “Donald Trump Is Going To Hate This Saturday Night Live Skit So Much” their headline read (February 4th). Both headlines give some insight into the president and he is definitely a weird politician in the sense that he seems completely ill-prepared to handle the lampooning that comes with holding public office.

A few minutes ago, I launched RESISTANCE CALENDAR! A one-stop site for all anti-Trump actions EVERY DAY nationwide: https://t.co/c0W7beDdzF

It could be that his life as a corporate monster, someone who is used to being feared, hasn’t prepared Trump to be ridiculed. Maybe Moore is right that comedy will “discombobulate” President Touchy. On that note, Trump jokes have become a thing with Trump’s hair central to some punchlines:

One joke I made up that doesn’t have to do with hair probably requires some explanation for most.

(Explanation: the very first line in “Moby Dick” is “Call me Ishmael.” It’s an acclaimed opening to a novel, because it really pulls you in. It’s like – okay is your name actually Ishmael? If not, then why should I call you it? Once you ask yourself those questions, you’re hooked for a bit. If you find the joke discombobulating, it has to do with the travel ban to the USA and Ishmael being a name that I think would be common enough in the countries that were targeted.)

This is what Michael Moore wrote on how How To Stop Trump:

1. THE DAILY CALL: You must call Congress every day. Yes – YOU! 202-225-3121. It will take just TWO MINUTES! Make it part of your daily routine. It’s even better to try their direct line. For Senators, find their numbers here: http://bit.ly/2kko0Ao. For the direct line to your Congressman/woman in the House of Representatives: http://house.gov/representatives. But here’s the best way to call them: Go to the App Store and get “5 Calls”. The app will dial the friggin’ phone for you and give you talking points for when you speak to your reps. Remember — a call a day keeps the Trump away.

2. THE MONTHLY VISIT: To add even more pressure, SHOW UP! Your member of Congress has a local office in your town or somewhere nearby. So do both of your U.S. Senators (often in the nearest federal building). Go there and ask to speak to them or their aides about the issues you care about. And when they have a town hall meeting, be there!

3. YOUR RAPID RESPONSE TEAM: You and 5 to 20 friends must form a Rapid Response Team so that when we need to leap into action (like we did at the airports the hour after Trump signed his Muslim Ban), we can email and text those closest to us to make an instant plan.

4. JOIN! JOIN! JOIN!: If you haven’t already, it’s time to join some of our great national groups: Planned Parenthood, ACLU, Black Lives Matter, Democratic Socialists of America, ERA Action, MoveOn.org – the list goes on and on. And all the new groups that have sprung up to fight Trump: IndivisibleGuide.com, TownHallProject.com, Organizing for Action (ofa.us), ActionGroups.net, etc. Go and so many more. Sign up!

5. WOMEN’S MARCH NEVER ENDS: The historic, record-breaking January 21st Women’s March on Washington — and the hundreds of other Marches that day across the US and the world, with over 4 million in attendance! — inspired millions and ignited hundreds of local movements. Every day now dozens of actions continue to take place as if the Women’s March never ended. It hasn’t. Join it! Go to my RESISTANCE CALENDAR (www.resistancecalendar.com) where you can find out what actions are taking place near you.

6. TAKE OVER THE DEMOCRATIC PARTY: The old guard of the Party has twice in 16 years presided over the majority of Americans electing the Democrat to the White House — only for us all to see the losing Republican inaugurated as President. How is it that we have won the popular vote in SIX OF THE LAST SEVEN PRESIDENTIAL ELECTIONS — the Republicans have only won ONCE since 1988 — and yet, we hold NO power in any branch of government?! We must elect reform and progressive candidate, Congressman Keith Ellison, as the new DNC chair. Keith is a former community organizer, the first Muslim elected to Congress, and a key backer of Bernie Sanders. Sign his petition of support at www.keithfordnc.org/howyoucanhelp. And locally, you need to start attending your county Democratic meetings. If possible, organize your friends and others and take over your local Democratic organization.

7. LET’S FORM BLUE REGIONS OF RESISTANCE: People keep saying, “I live in a Blue State – what can I do?” Show the rest of America what it could look like in a state where Trump isn’t in charge! New York should go ahead and offer Free College for All. California can create its own Universal Health Care. Oregon can stop mass incarceration of African Americans. Hawaii can enact its own climate change laws. Important historical note: Before Roe v. Wade made abortion legal, California and New York passed their own state laws to make it legal. This greatly helped pave the way for CHOICE being the new normal – and, three years later, for the enactment of Row v. Wade.

8. YOU MUST RUN FOR OFFICE: I know, that’s the LAST thing you want to do. But if we keep leaving the job up to the dismal, lame, pathetic political hacks who have sold us all down the river, then what right do we have to complain? This is only going to get fixed when you and I decide we are willing to put in our time — even if it is a brief time — and run for office. Run for school board, town council, state senate in 2018. I ran when I was 18 and got elected. You can, too. At the very least, run for precinct delegate. The time commitment is just 3 hours a year! Call your city or county clerk and find out how to get on the ballot. If you’ll do it, I’ll do it.

9. JOIN THE ARMY OF COMEDY: Trump’s Achilles heel is his massively thin skin. He can’t take mockery. So we all need to MOCK HIM UP! I truly believe the final tipping point for Trump will be when he implodes from all the laughter — the mocking, the unbearable ridicule of tens of millions of Americans that will discombobulate him and force him out of the White House. I don’t know what happened to Trump in boarding school at 13 and I don’t care. Whatever it was, let’s use it. He’s used all the other things he picked up over the years – misogyny, bigotry, greed – against the powerless and the unfortunate. It’s time to laugh him outta town. And if there’s one thing we all could use right now is a good laugh — AND the possibility of a much-shortened presidential term.

Please share this and spread the word. Follow me on Twitter (@MMFlint) and Facebook (facebook.com/mmflint) and I’ll keep posting ideas on what we all can do. We can stop him. We can nonviolently block and obstruct halt the damage he’s doing. But it’s going to need — and take — ALL HANDS ON DECK!

Ladbrokes sportsbooks seems to both think and not think that the President Twitter will become discombobulated. Currently, Donald Trump is actually the favorite to win the 2020 election with Ladbrokes. The same betting firm makes Trump a favorite “to leave office via impeachment or resignation before end of 1st term.” The two sets of odds seem to be at ends with one another to a certain extent. How can someone be favored to get impeached or to resign and be favored to win the next election? Like Trump is going to get impeached and then win in 2020? Not likely.

Could be that it’s not just Trump that’s discombobulated with everything that’s going on. If Trump does resign or get impeached then perhaps political death via lampooning could be a part of that. Chances are that whoever replaces him will be a little thicker skinned with handling the jokes. After all, seasoned politicians know that it comes with the territory.