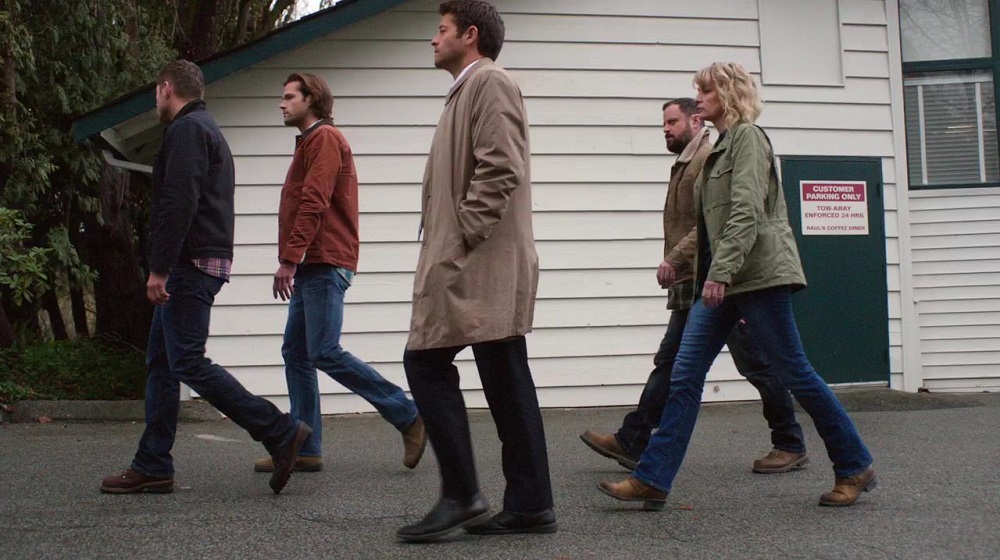 Supernatural: Season 12 Episode 12 Stuck in the Middle (with You) Recap and Review

One of my colleagues tagged the previous Supernatural episode Regarding Dean as being the best for Season 12. It was really cool seeing Jensen act in such a range, Rowena having more to do and Dean and Rowena being light with each other but with regards to story, “Stuck in the Middle (with You)“ is the best one yet.

SPOILER ALERT for those who haven’t caught up but I try to do my recaps in such a way as not to spoil everything. Anyways, I might just break trend because this episode is just so awesome. You’d think the show has run out of ideas when it comes to bad guys. Again, how do you top God and The Darkness? Go back to basics, with a few twists.

So far, looking for Rosemary’s baby has dragged on a bit. But this time, things have gotten VERY interesting. In the trailer, we see the Winchesters including Mary, plus Castiel and another hunter named Wally lightly talking in a diner which is the episode’s starting point. Dean has gotten light with Cas again and egging him to make a move with the waitress while Sam being the geek, continues on his research on his tablet as to the whereabouts of Kelly and Lucifer’s child. Mom, on the other hand, gets another call for help from a fellow hunter and later the discussion switches to the demon they’re currently hunting. Then the episode fast forwards to their case where Mary is dragging a wounded Castiel while Sam and Wally are fighting off a couple of demons ending in Wally’s death. Funny thing about this episode, each arc has its own title beginning with Castiel’s.

We go back to the diner before they meet up at the table. They talk about their search for Lucifer’s child which Wally found incredulous. If the derivative of the title is a western, they seemed to make a point of it with the five walking in slow-mo as they get to the diner. They talk about their target demon and then fast-forward to their setup at the demon’s house. Sam makes a devil’s trap under the rug while Dean loads a gun with devil’s trap bullets. Cas comes in the house and encounters Mary as she enters the room through another door. Seeing as they’re dealing with a demon, Cas seemed suspicious about Mary’s whereabouts. Her excuse was coming back from the little girls’ room. Someone give her a tattoo already! Wally then gives them a heads up that their target is coming. Just another demon, should be easy enough. He has this extended, suspenseful entrance scene which increases the suspense and it pays off when Dean shoots the demon repeatedly to surprisingly no effect. Sam also stabs him with the demon knife which doesn’t do anything also. Knight of Hell? The demon suddenly gets furious upon seeing an angel which happens to be Castiel. He separates the team, leaving only him, Castiel and Mary in the room. Mary is terrified when he sees the demon’s yellow eyes.

Now that was the really exciting part. Has Azazel returned? Apparently not as he hasn’t mocked them in any way or even recognizes them. Azazel isn’t the only yellow-eyed demon out there, and it’s been a very long time since we’ve seen one other than a few cameos from flashback Azazel. Cas tackles the demon from behind then Mary runs out of the house, and Cas gets thrown out the window. Sam and Dean are out on the porch as Wally alerts them of two more demons coming. Dean goes to help his mother while Wally and Sam fight the two demons and we know how that ended. Later, the demon comes up to Cas and magically summons a spear from behind and stabs Cas under his ribs. Cas is about to get killed when Mary runs over the demon with a pickup. Mary takes wounded Cas to a barn, and Cas shows his wound which seemed poisoned. The boys arrive and tells Mary about Wally. Sam was surprised about the two other demons and was more surprised when Mary tells him that their target’s eyes were yellow.

We then switch over to Mary’s story which starts with her and Wally staking out their target. Last we saw Mary; she was talking with Mick. The demon is one of her assignments, and she’s been using Wally as a front for her sons as the ‘hunter’ she’s been helping out. Wally was actually the other hunter Mick talked to. Next scene is when the gang is setting up the house. Mary opens the demon’s safe and takes out a mysterious item and then she meets up with Cas after doing some ‘business.’ The scene forwards to them being in the barn. She texts the BMOL about what happened, and they said they screwed up the intel. Cas says the spear was somehow poisoned then Crowley shows up saying they’re all going to die.

Finally, an episode with Crowley and his first meeting with Mary. Sam then deduces the two demons were from Crowley and the confrontation with the two was a misunderstanding. Crowley then reveals the identity of the mysterious demon named Ramiel. Ramiel is one of several ‘Princes of Hell.’ So that’s the official name for yellow-eyed demons. Castiel is also familiar with the term, and Crowley explained that they’ve been out of the limelight and wanted it to be that way, much like Cain did. 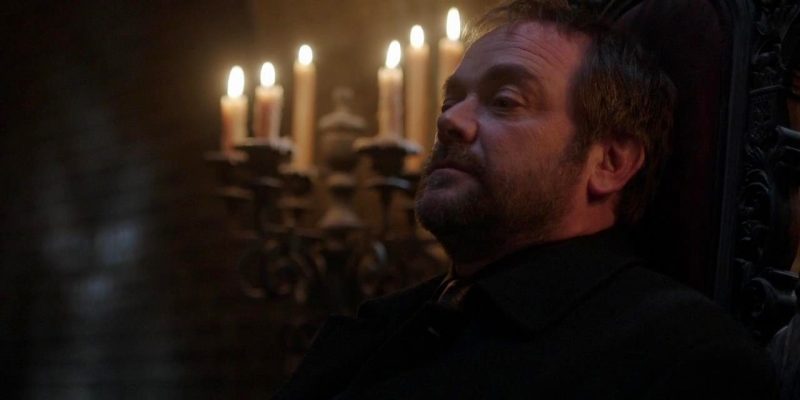 After the apocalypse, with hell having no ruler, Crowley approached Ramiel with Michael’s spear, the one Michael was supposed to have used against Lucifer, the mysterious item and the crown to hell. Ramiel just wants to be left alone and says the others Asmodeus and Daigon, feel the same way, so he gave Crowley the crown which actually explains how he officially became the King of Hell. Crowley gets the crown under the condition that the Princes of Hell not be disturbed under any circumstances, or there will be hell to pay. Crowley then explains that the spear Cas was stabbed with was the Lance of Michael. As far as Mary’s concerned, the picture of stylized Michael with his lance in her BMOL file was just a painting where the safe was hidden. The lance kills demons quickly and makes angels suffer slowly. The brothers then suggest a plan to capture Ramiel and demand for the cure for Cas. Dean tells Crowley to leave if he’s not going to help. Crowley seems to have done so but actually, confronts the approaching Ramiel to keep him from going into the barn and says his line which we heard in the trailer prior to the show’s return after the winter break. Crowley asks Ramiel for another deal and ends up getting thrown into the barn himself before Ramiel makes his entrance.

Castiel’s condition continues to worsen and tells the Winchesters to leave him. But they refuse to as they consider him family. Ramiel arrives, and they trap him in a circle of holy flame which seems to stop a prince of hell. Ramiel tells the brothers that there’s no cure for Castiel and that he’d rather not care about anything. He also revealed that he knows about Lucifer’s child and that Daigon has custody of Kelly which explains her total disappearance. He also tells the brothers that something was stolen from him. The mysterious item Mary took from the safe. He gives them 30 seconds to hand it over, but Mary doesn’t give nor reveal the item to the others. Ramiel uses the lance to get out of the circle and starts attacking. He loses the spear to Sam and Sam kills him with it. Cas appears to be dying until Crowley discovers how the spear works and breaks it, curing Cas. It’s a shame as the spear could have been another potential superweapon. Crowley then leaves before anyone can show any appreciation. Not sure if they’d show any, but if they did, it might grow Crowley’s heart three sizes. Castiel asks what the Ramiel meant about something being stolen, but Mary found an opportunity not to say anything.

Here we go with the Winchester family secrets, and it turns out that Mary is no exception. She has her own agenda and doesn’t reveal it to the others, much like Sam and Dean’s repeated secret keeping that ends up shaking the world, heaven and hell. Welcome to Supernatural Mary Winchester. The final chapter in this episode shows us Mary talking with Mr. Ketch. Whether or not the BMOL knew the nature of the demon remains a mystery but they knew he was keeping the Colt which Mary hands over. We see how tough and sinister Ketch is when he takes on Mary’s threat should anything happen to her sons. She rephrases her threat, and Ketch again apologizes for the ‘mistake.’

The final scene is where Crowley orders his demons to find the Colt which also unknown to him was taken by Mary. He needs the gun as the princes of hell have become a threat in case they get wind of Ramiel’s death. Funny how he’s using a phone instead of the blood ritual to communicate. Gone are the old ways perhaps. Lastly, which makes this episode epic, we get to see Lucifer’s ultimate fate. Rowena’s spell worked. He’s back in the cage besides Crowley, mocking him for helping the Winchesters and his vessel appears to be none other than Nick (Mark Pellegrino). Arguably the best Lucifer apart from Sam. Crowley gets his revenge on Lucifer by calling him a dog.

This episode is great as it revealed the true nature of Azazel and how powerful he actually is if confronted head on, even by angels. It shows us that there are others like him and that they’re equally dangerous and maybe even more so. It reveals the fates of Kelly Kline as well as Lucifer’s. It shows us another secret-keeping Winchester which could ultimately throw another wrench on how the world works, and that’s not counting the impending cosmic consequences brought upon by Castiel by killing Billie. And she also doesn’t stop even if some are hurt in the process. Somehow, the boys seem to take after mom more than dad. Well, dad taught them how to hunt and make sacrifices while mom is adept at keeping secrets. Sam and Dean are more in the background for this episode as the spotlight is more on Cas and Mary and it’s great seeing Crowley again doing something big. Love how noble Crowley has become and it’s a shame how he’s treated. Really hard not to mistrust the king of hell.

It would be exciting to see how the Lucifer’s baby arc would end and who would be playing Daigon and Asmodeus. Just when you think they’d run out of ideas about angels and demons, the show brings us something more to actually look forward to regarding them. Never run out of ideas guys. See you in 300.