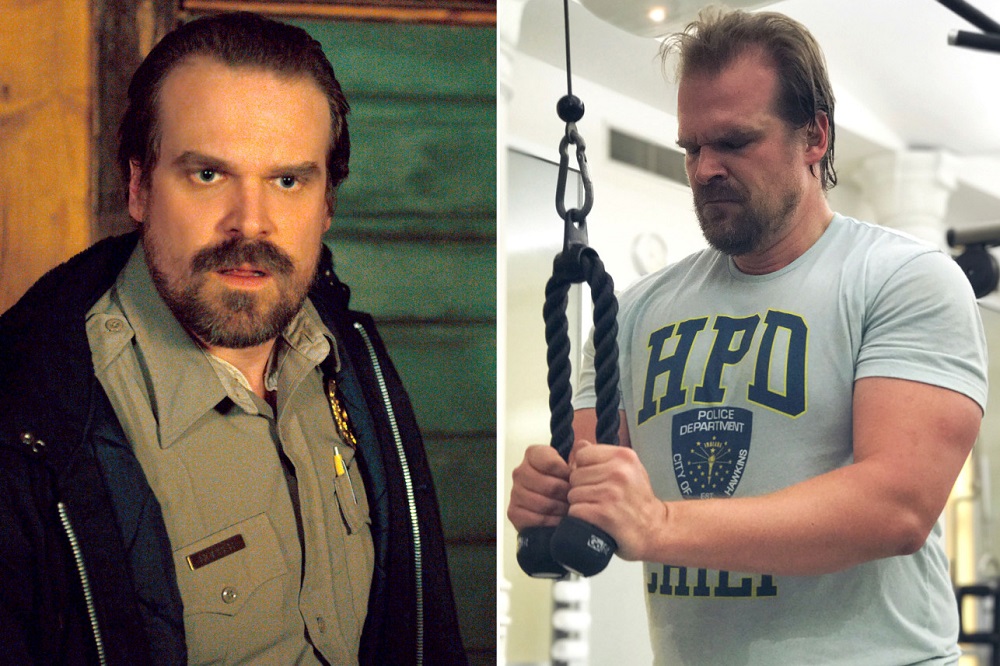 Season 2 of “Stranger Things” might have kept many of our favorite things from the first season, but one of the more noticeable changes is David Harbour, who plays the show’s hero, Chief of Police Jim Hopper looks like the donut shop has closed in town.

Hopper has gone from husky to beefy now which is quite noticeable in the show’s new season, which came out on Friday. 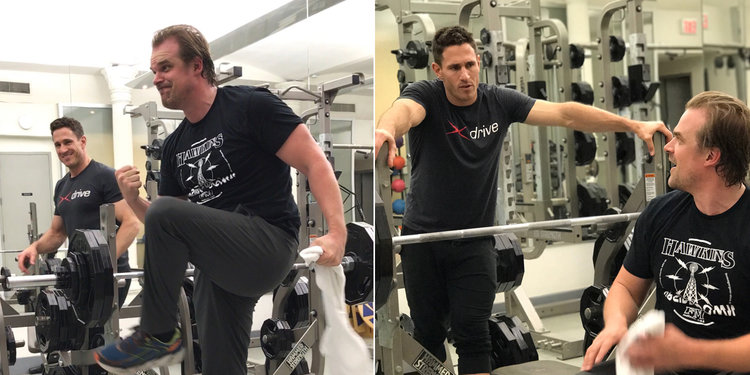 That’s because Harbour, 42, has been working hard in the gym with celebrity trainer Don Saladino. “He’s someone who’s obviously very artistic, but I saw him turn into just a monster, pushing weight and pulling weight,” the trainer, 40, said.

Saladino — who works with dozens of A-list celebrities including Scarlett Johansson, Ryan Reynolds and Victoria’s Secret models such as Erin Heatherton — has trained Harbour for three years. He was also tasked with bulking Harbour up for his role as the demonic hero Hellboy for the forthcoming comic book flick of the same name.

“People call me the superhero trainer,” says the ripped Saladino at the cafe in his Soho gym, Drive.

Saladino, who lives on Long Island with his wife and two kids, first earned that reputation when he trained Hugh Jackman to be Wolverine in the “X-Men” series. Later, he prepped Johansson for her role as the vixen Black Widow in “The Avengers” and “Captain America.” Most recently, he helped Reynolds attain a trim and cut physique for the sequel to “Deadpool.” By his own estimate, he’s probably trained 50-plus A-listers, many for the kinds of physically demanding roles that depend on audiences believing those characters can fend off evil with their bare hands.

But with Harbour, he had to sculpt a different kind of hero.

In “Stranger Things,” Harbour plays a perpetually hungover local sheriff with a beer gut who at the end of the first season was rescuing young protagonist Will Byers from the creepy alternate dimension known on as the Upside Down. Far from your stereotypical hottie hero, a gruffly handsome Harbour nevertheless emerges a champion in the small town of Hawkins.

During “Stranger Things,” Saladino had Harbour on strengthening and resiliency exercises, just to keep him healthy for the rigorous film schedule and the occasional brawl scene. They worked together three to four days a week whenever he was in town and increased to five to six days a week in the nine weeks before “Hellboy.”

Workouts begin with a warm-up of “bear crawls,” which saw Harbour scrabbling along the gym’s AstroTurf floor on all fours to sculpt the shoulders and work the obliques. Then he does a series of targeted strength-training moves, including the “sled push,” in which he uses his whole body to push a weighted rolling sled, which is one of Harbour’s favorites.

Typically a session like this with Saladino would set you back up to $1,000 an hour. But he recently joined the workout app Fitner, which, for $10 a month, allows users to ask him their specific fitness questions and watch instructive videos of his celebrity workouts — including Harbour’s. You might miss out on the gym floor banter, though. Between sets, the two would shoot the breeze about old movies from the ’80s, such as “The Cannonball Run.”

Between sets, the two would shoot the breeze about old movies from the ’80s, such as “The Cannonball Run.”

“Dave never complained about anything,” Saladino says. “I think he just loved how strong he was getting.” In fact, Harbour has increased the amount of weight he can kettlebell deadlift from 104 pounds to 375 pounds.

And Saladino says that he doesn’t want Harbour to deprive himself of the foods he loves, like burgers and Ben & Jerry’s. 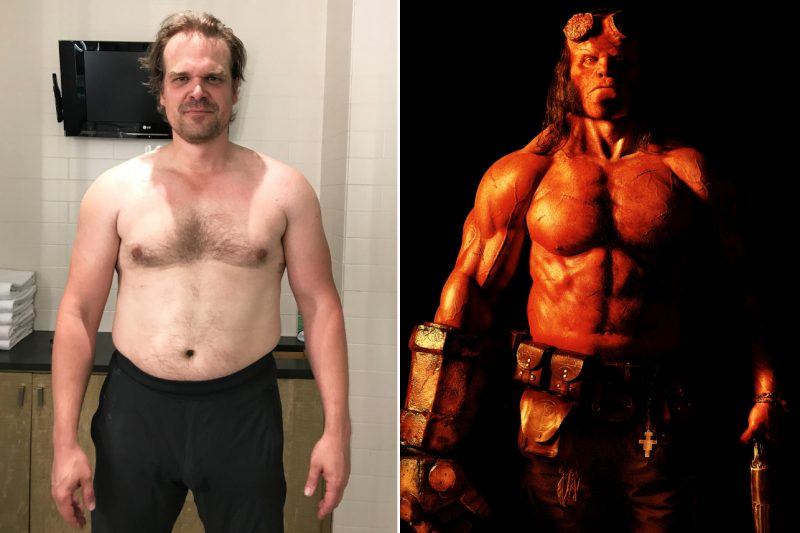 “I want to bring love handles and eating sandwiches back,” the actor joked to Women’s Health earlier this month.

But Saladino’s secret weapon in Harbour’s transformation — which he says nearly all his clients (even models!) do pretty much every session — is what he calls a “suitcase carry.”

Clients grip a heavy kettlebell in each hand and work through a variety of movements, such as lunges, or even simply walk back and forth holding the weights. It doesn’t sound like much, but the exercise tackles nearly every muscle group in the body, from the glutes to the biceps, according to Saladino. It has the added benefit of improving grip strength, which protects the elbows and the shoulders, he says.

“It has a cardiovascular component, and when you’re carrying weights you’re burning fat,” he says. “It’s one of the most effective and most underused exercises.”
Feel free to bid those burpees good-bye!