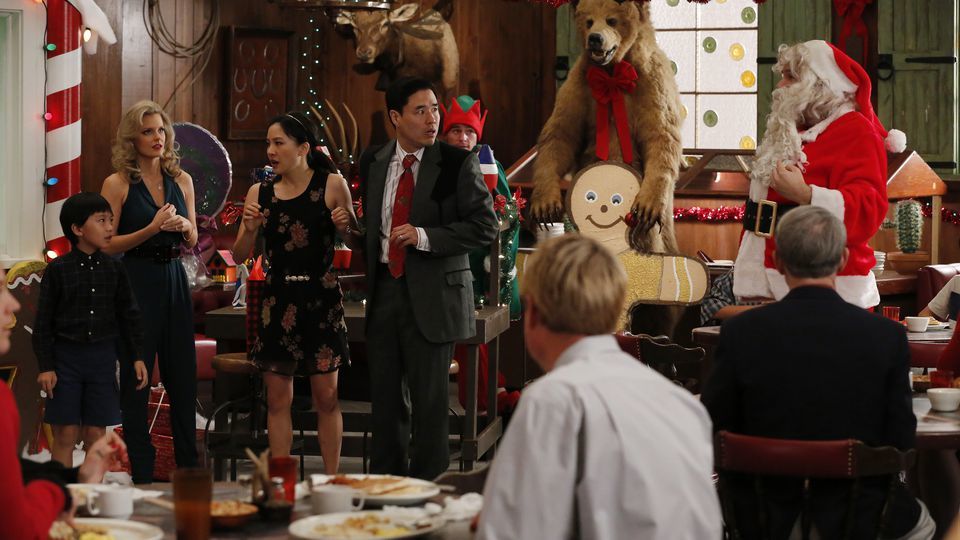 It’s Christmas time on Fresh Off the Boat, and Jessica puts up “Jessicatown” which is absent of one important Christmas tradition- Santa. When Louis asks her why he’s faced down in the snow, she tells him “He’s labor, not management,” and he’s fat.

It’s bright and cheery in the Huang house and Jessica raves that she has improved Santa by making him a scientist that Evan can look up to. That’s the only ways she can allow him to believe in old St. Nick.  “You shouldn’t mess with tradition,” Louis tells her. He’s concerned because Santa will be at the restaurant tomorrow, which is no biggie to Jessica. “Just we’ll tell whoever’s playing Santa to brush up on their algebra, physics, and basic trig.” The only problem is Mitch is playing Santa, and we all know what that means- They need a new Santa. So they ask Marvin, Honey’s husband to do it. He is more than happy and up to the challenge.

While they plan how Santa will impress Evan, Emory and Eddie discuss what they plan to get Jessica for Christmas. Emory creates a replica of the bakery from Jessicatown, but Eddie, ever the loving brother, tells him that’s lame and he should get her a cool gift, like the Nerf Bird he got their grandmother the year before.

At Cattlesman Ranch, it’s time for Santa and Evan is ready to hit hum with scientific questions. As soon as he walks in, he pulls him to the side, and they talk about all kinds of smart stuff. Eddie and Emory enjoy the food but as they eat, they see Honey give Jessica… the bakery for Jessicatown. “What the what?” Emory is devastated.

Just as things get going, Mitch comes in dressed in his Santa suit shocked that there is already one there. This causes Jessica to break the news to Evan that the real Santa is Chinese. “I’ve never seen a Chinese Santa” Evan says, and his dad tells him that because Chinese Santa hired white Santa to be the face of Christmas just like he hired Mitch to be the white face of Cattlesman Ranch.

The next day, Emory is bummed about Honey’s gift and panics because he doesn’t know what to get now, but Eddie tells him to just “let it ride.” Confused, his brother tells him that it means that “it will work itself out… the best action is inaction.” He then gives his brother a “poem” which is Tupac’s “Dear Momma” lyrics that they can give Jessica together. So Emory writes it out on a scroll to make it more dramatic.

Downstairs, Jessica makes some treats for Chinese Santa and Louis tells her to stop fixing Santa. Evan then walks in and tells them the epiphany he had about Santa. “It totally makes sense, smart enough to understand the science of flight, yet small enough to fit down the chimney, that dude Chinese.”

Evan and his parents head to his Christmas program, and he is super excited. However, once it starts, the MC announces that due to a new law that “prohibits any religious, spiritual or gender connotations in state funded children’s theater” they are having instead the Pan-Cultural Seasonal Entity or Panny, “who is all things because he is nothing.” Evan is not having it. “Where’s Santa, it’s Christmas there should be Santa, he’s kind and generous and caring, and he’s Chinese.” The applause from people in agreement stops, and a hush falls over the crowd, and then an argument ensues.

“Santa is not Chinese… that doesn’t even make sense” people in the crowd say. This prompts Jessica to say, “Why can’t Santa be Chinese, everyone’s on board with a fat man flying around the world just as long as he’s white?”

Back at the house, Emory realizes Eddie plagiarized Tupac’s lyrics when he sees their grandmother watching the video, and he confronts his brother.  “I didn’t plagiarize; I sampled.” Emory doesn’t want to hear it and demands that they come up with a new gift for Jessica. But Eddie tells him to “let it ride.”

Once they make it home, Evan is confused and doesn’t know what to believe because what his parents have told him about Santa and what the people at school say are two different things. So Jessica, in an attempt to “make it right” she asks Honey for her help. That night, Jessica dresses up as female, Chinese Santa. Evan hears her and makes his way downstairs. While glad to see the Chinese Santa, he wants to know how she’s a woman.

She concocts a whole story about the white Santa’s working for her, which ultimately makes her Boss Santa, and she tells her son to not tell his brothers about her. “You are a special soul one who believes in magic but still have a scientist mind, like me.”

Evan goes back to his room, but his suspicions cause him to look in his mom’s room to check if she’s there. She is in the bed but he only sees the back of her head, and we see that she still has her makeup on when Louis turns over to give her a kiss.

On Christmas, as they open gifts, the bakery Honey gave Jessica is broken by Grandma’s Nerf Bird, which makes room for Evan to give her the bakery he made for her.

Everyone opens their gifts and enjoys the spirit of the season.