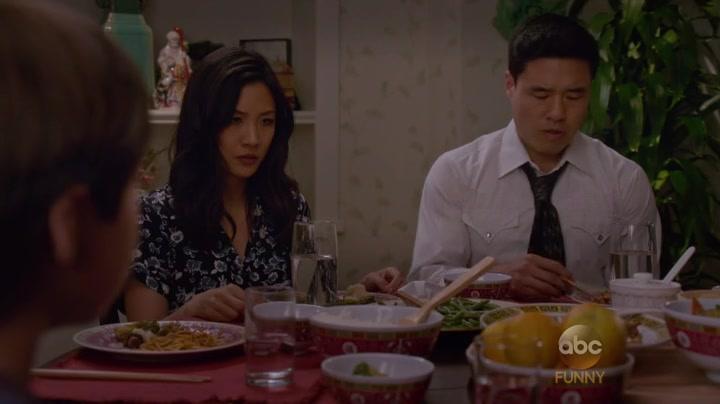 It’s Thanksgiving at the Huang’s house on “Fresh Off the Boat,” and Jessica has been chosen as the daughter to host it this year.

It’s a really big deal for her mother to give her the honor of hosting the family Thanksgiving dinner is usually given to her sister Connie. These two are super competitive to the point that you wonder if they even like each other at all. But in the episode, we see a softer side to their relationship, and it comes in the form of Jessica comforting her sister who is in the middle of a separation.

But the lovely dove-y stuff doesn’t happen before all the drama that comes when these two get together. Louis, the ever supporting husband, takes on the duty of making sure “Huangsgiving” goes off without a hitch. But a wrench is thrown into his plan when, in an effort to comfort his brother-in-law and gives him advise on what he should do to save his marriage, he gets super drunk and wakes up in the driveway of his house.

The morning after Connie, Steve, their son and Jessica’s mom arrive proves to be a trying one as Louis is too hung over, Ethan and Emery take issue about decorating the table, and Eddie’s plan to bond with his cousin over grunge music doesn’t work out because “grunge is out.” The two older cousins find common ground, and they can thank the internet full of hot babes for that.

While all the chaos is going on downstairs, they work on getting the computer up and running. Remember it is the mid 90’s and all that is available is dial up so downloading a picture takes an eternity. They each have an idea of the famous woman they want to look at and come to a neutral ground that they both are happy with- Traci Chapman. But after waiting and watching the ticker go back and forth between 98 and 99 percent, they finally see their dream woman… dressed in baggy jeans a white T-shirt and a black vest. Very sexy.

After taking a shower and getting himself together, Louis pulls it together just enough to be of some assistance in the kitchen. For Jessica, not only does she plan to cook the best Thanksgiving dinner, she has invited one of her mother’s favorite people, Oscar, a flamboyant friend who brings along his boyfriend to this year’s dinner. Her mother is overjoyed to see her good friend and the two laugh it up to Connie’s consternation. She is determined to find a way to make her sister look like a fool since she lost her bid for the annual dinner and she does when she realizes that things aren’t going so well in the kitchen.

In fact, they are going horribly as the turkey Louis bought to replace the Cornish hens (that plan backfired when live birds were delivered earlier in the day) didn’t cook because he turned on the oven light and not the oven temperature. Jessica tries to her best to stall, even talking Louis into playing football with Steve, Oscar and Honey’s husband Marvin in the street. But that doesn’t last long as Connie tells everything that the turkey is raw. Jessica brings out her homemade cranberry sauce and suggests eating the food items individually, and her mother tells her that they know what’s going on, and Connie has gone to the store to buy a fryer.

This upsets Jessica because she already thinks her sister is faking marital problems to steal her thunder. She rushes to the only store open on Thanksgiving, Glenns and finds Connie looking at fryers and this is where the “sister” moment happens. Jessica tells her she knows what she’s up and even brings up all the times in their lives when she has tried to steal her shine including the fact that she and Steve are having issues. But her sister confides in her that they are having issues because he’s so annoying, to which Jessica agrees, and she just can’t stand to be around him. She realizes her sister is going through something and consoles her, reminding her how much Steve loves her and that she just needs to give it some of the time. They then fight over who is going to buy the fryer and Jessica wins.

They return home and have a lovely Huangsgiving… at 11:00 pm.