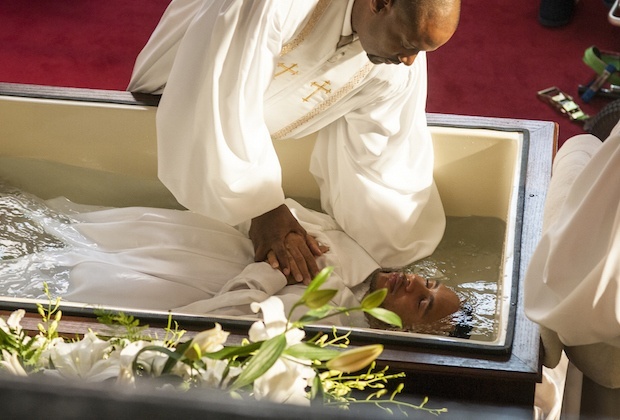 This week on Empire, get ready for a dip in the baptismal water… with sharks.

So Vernon’s dead body showing up in DA’s Ford car miraculously makes her and the judge drop the case, and Lu is a free man. Wow. Andre is back at Empire and ready to work.

We see Cookie working with Tiana, and she’s looking good. While getting help with her phone, they see a video of Lu telling everyone that he was set up, and justice has prevailed. Hakeem brings in his new girl Laura and introduces her to Tiana. He asks T to show her around. She does, and she also makes her think that Hakeem brings girls to the studio all the time to make them “a star.”

Cookie and Hakeem have a conversation about what really happen to Vernon. “Mom you think Vernon really offed himself.” She lets her youngest know that where she’s from if snitches don’t kill themselves, someone else will. They share a moment, which shows the progress of their relationship.

Lu throws a party back at Empire equipped with girls twerking, working and putting it on pretty much everyone. André is given the royal treatment and named the head of Gutter Life an old label Lu use to run.

Dre later goes to see his pastor, Reverend Price, who tells him Lu is just testing him. Andre says he needs protection, which means baptism. The pastor tells him to confess all his sins to his family so that he can have his conscious clean and Dre laughs. “My family only goes to church for a funeral.”

Jamal is in the studio taking direction from his father on his latest song. Lu tells him to sing the song this way, but Jamal asks Ne-Yo, who makes a cameo, what he thinks. Lu tells them that they should do a song together since they know what works best. Just then Michael walks in and is introduced to Ne-Yo. When he finds out the singer is going on the road with Jamal, he is ecstatic, and Lucious doesn’t like it. Mike leaves out, and Lucious tells his son “You don’t bring your girlfriend on the road.” How did we not see that coming?

Tiana waits for her ride after practice and two “fans” come in wanting a picture. They end up robbing her and taking her purse. She falls to the ground screaming for help. Um yea, she went out like a real punk here. I’m just saying.

She goes back inside Dynasty and Cookie is pissed knowing what this could do to her business. Then, the girls who took her purse put a video on YouTube pretty much extorting Tiana, but Cookie is not having it.

The artist who painted Jamal tells him, in front of Michael, that he shouldn’t bring his relationship on the road. Moments later, they are walking, without Michael for some reason, and he comes on to Jamal. I mean like pushes him up against the wall and at the same time unzips his pants come on to him. Like Whaaaaat? Jamal tells him about himself and says that he could never do that to Michael how happens to show up right as all of this is finishing up.

Dre shares his plans to get baptized with Rhonda, and she’s like “Um, okay.” She tells him that he doesn’t have to confess anything to his family as they will not understand. We find out too that their sex life is suffering as she wants to have sex right then and there in the office, but he tells her, “not now.”

Cookie and Lu meet at a mortuary to discuss what to do with Vernon. “So did you off him or did you get one of your goons?” He denies it as he tries to get some. She tells him “you better not be behind Tiana’s purse snatching” and, of course, he says he’s not.

Back in the studio, Jamal gets advice from Ne-Yo since he can’t seem to focus during the session. The singer/producer tells him he should bring Michael and after realizing he’s right, Jamal belts out the song perfectly.

Later that night, after making his decision to bring his man with him, at a party at their house, the artist who tried to suck Jamal off ends up going down on Michael instead… and he lets him most likely in retaliation for walking in on them. Jamal walks out on them (they were on the balcony). And doesn’t really do anything. Michael doesn’t say a word either. I’m so confused. We don’t really know what happens there as it is not mentioned or referred to the rest of the episode.

Cookie and Laz, the promoter she hired for Dynasty’s first tour, spend some time together in her office when they catch two guys stealing her masters. They pull guns on them. When Cookie asks, “Who sent you,” they tell her “Thirsty.” Lucious you dirty dog.

At Jamal’s house the next morning, Dre meets with his brothers to confess his sins, one of which is coming clean about sending thugs to jump Jamal and letting Hakeem take the blame. He asks them to be there for his baptism. Hakeem is down, but Jamal is concerned how the pastor feels about his lifestyle.

Dre then goes to see his father who tells him to “check your faith at the door.” Dre lets his dad know that he can’t do that. He then confesses to him that he almost committed suicide in Lu’s studio because he thought he hated him so badly and felt that would hurt him. He asks father to come to his baptism, and Lu tells him no because, “There I no God, you just need to man the hell up.”

Jamal offends Laura. She tells him, “I’m not that kind of girl” as he pushes up on her leaves. The next day he finds her walking to her bus stop to go home and apologizes. She forgives him because all she’s ever wanted to do was sing.

The day of Dre’s baptism, his momma is there to help him get ready. He confesses to her, “I’m not a good person mom… I’ve done horrible things.” She tells him “God knows your heart, now keep your mouth shut. I don’t need to know what you did nor does anybody else.”

His brothers, mother, and wife are there to support him…and so is his daddy. Way to go Lu showing up for your son. He walks into the church, and there is a hush that falls over the crowd. “Speak the devil’s name and he will walk right in,” his ex-wife affectionately says. He introduces himself to Reverend Price and Dre tells him, “Thanks for coming pop, I love you.” Lu, the loving father he is, tells him, “I know you do.”

During Dre’s baptism, Lu and Cookie argue back and forth, and Rhonda tells them to “hush.” As Dre goes down, Lu has flashbacks of his mother drowning him as a child, and he can’t take it. He walks out right as Dre comes up from the last dip.

In the end, Hakeem is kidnapped during a run in the park (in broad daylight), and we are left swimming in a pool of wonderment and exhaustion.