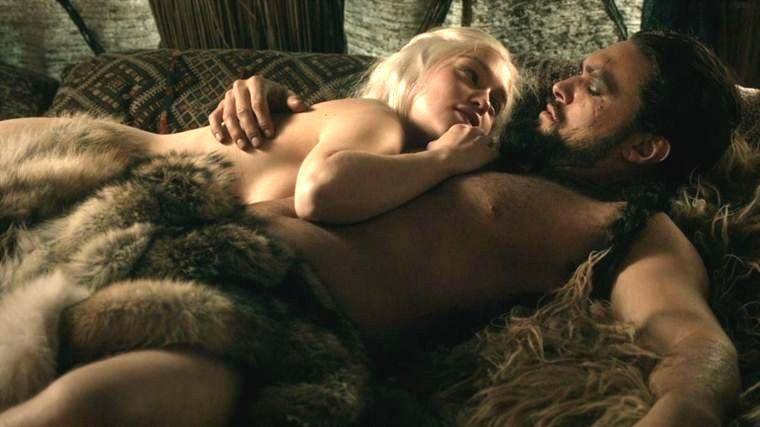 UPDATE: Sadly, we had to take down this very beautiful g-rated picture of Emilia Clarke as the overzealous censors at Google Adsense thought it might offend someone. If it had been a picture of someone blowing another person away with a gun with plenty of gore, that would be okay according to their guidelines. Gotta love Google playing Donald Trump!

Kicking off today’s celebrity gossip, Game of Thrones actress Emilia Clarke has stated that she feels more men should appear nude on the show, as her character and other female characters have gotten nude more than the men have. She made these comments in response to a male member of the cast that objected to appearing nude on the show because he didn’t want his reputation to suffer for it.

Speaking of Emilia Clarke, in a recent interview with Ellen DeGeneres the actress confessed that her photo on the cover of November’s Esquire Magazine was photoshopped, and she had needed alcohol to pose for the photo, which depicted a sex scene.

Maisie Williams, also a Game of Thrones actress, has gone public with her relationship with her boyfriend of one year. Despite being happy in the relationship, she has stated that due to her parents’ divorce when she was a child, she hasn’t decided if marriage will ever be right for her. She has stated that marriage is pointless, and it makes breaking up harder to do.

X-Men Apocalypse actress Olivia Munn recently decided to have her eggs frozen upon turning 35 years old but not being ready for a family yet. She was inspired to do so after a 35-year-old friend of hers did the same. Munn said she thinks every woman should freeze her eggs so that they can have a baby when they are ready to.

Though Tom Hiddleston has played Marvel’s Loki in several movies, he has already decided that in the future he doesn’t want to keep starring in them. Despite reportedly enjoying his time playing Loki, he is looking to move on to other movie roles. There are talks that in the future he will take over the role of James Bond.

Despite rumors to the contrary, Liam Hemsworth is denying that he and Miley Cyrus are engaged. Though the couple was engaged in 2012, they broke it off in 2013. They are allegedly dating again but are keeping quiet and refusing to give details.

During the filming of The Huntsman: Winter’s War Charlize Theron and Emily Blunt spent time together on the set with Theron’s young son. As a result, the four-year-old developed a crush on Blunt. He is also enamored with Blunt because she will be providing a voice for the My Little Pony cartoon, of which Theron’s son is a huge fan.

Ryan Gosling and girlfriend Eva Mendes are anxiously awaiting the birth of their second child together. Though the couple’s representatives have not yet confirmed the pregnancy Ryan and Eva, don’t seem to be hiding the news.

Pregnancy is in the air throughout Hollywood, as Ryan Reynolds and Blake Lively are also set to add another child to their family. During a reshoot for Lively’s upcoming movie, she appeared to be visibly pregnant; though her representatives have yet to confirm it. The photos were leaked and despite Lively attempting to cover her growing belly, fans still took note that she does indeed seem to be pregnant.

Fans of Channing Tatum are excited to hear that he has signed on to star in Kingsman: The Golden Circle. Due to the delay of another movie Tatum is slated to be in, he now has time to film Kingsman. Producers are also talking to Elton John about joining the cast of the movie.

Before the red carpet premiere of the new Captain America movie, Chris Evans had to be given a pep talk from co-star Robert Downey, Jr, who told him to “man up.” Evans reportedly has a history of becoming nervous before any public appearance. Downey Jr said that he thinks the reason Evans got nervous before this appearance is because of the importance of the movie premiere and the excitement it brought with it.

Michael Keaton is negotiating a deal to appear in the upcoming Spiderman movie. The movie is set to start filming this summer and already stars Tom Holland and Marisa Tomei.

Jennifer Aniston recently admitted that when she filmed scenes for Mother’s Day, co-starring with Julia Roberts made her so nervous that she messed up her lines. Aniston has always been a fan of Roberts and she said working with Roberts was a very different acting experience for her. In addition to Aniston and Roberts, the movie also stars Jason Sudeikis and Kate Hudson.

Wrapping up today’s celebrity gossip, for the 2017 Christmas holiday season, Benedict Cumberbatch is providing the voice of the Grinch from The Grinch Who Stole Christmas. He was chosen to voice the part because those behind the project wanted it to have a different feel than the original Grinch movie. They cast Cumberbatch because he could provide comedic wickedness that other voice actors have not given to the Grinch.