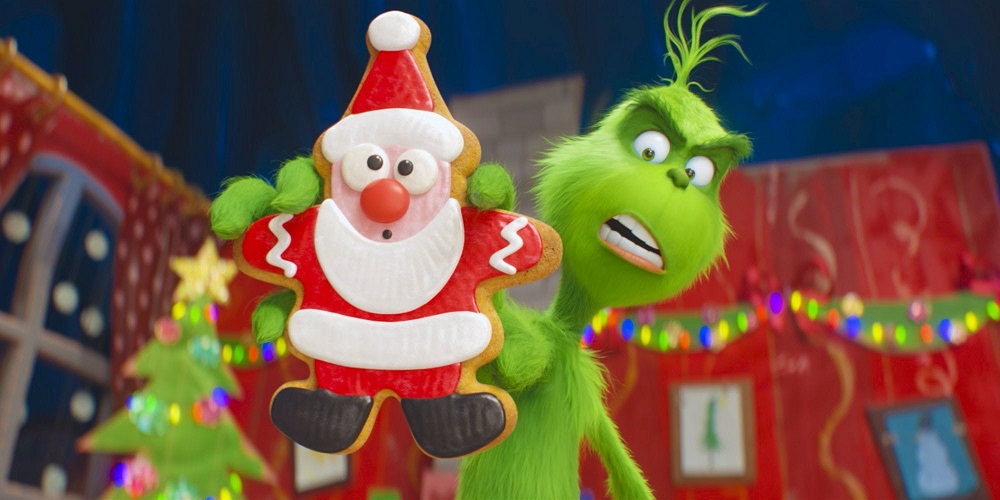 “Dr. Seuss’ The Grinch‘ might be 61 years old, but add amazing computer animation combined with an aggressive marketing campaign, and he’s as relevant today as he was when he first hit. Amazon shipped out 10 million Grinch-themed boxes alone!

Based on the 1957 book “How the Grinch Stole Christmas” — and following in the Whoville-hating footsteps of the classic TV special, a stage musical, and a live-action film starring Jim Carrey — arrived in 4,141 theaters in North America over the weekend and took in a strong $66 million. The new film sledded past mixed reviews, with Benedict Cumberbatch leading the voice cast, cost Illumination Entertainment about $75 million to make and was distributed by Universal Pictures.

“Christmas came early this year,” the studio said in a statement on Sunday. “The Grinch,” marketed with Grinchy ads that poked fun at itself (“Another remake?! Hope you’re proud Hollywood”), took in an additional $12.7 million from 23 overseas markets, according to Universal.

Last week’s top film, the Queen biopic “Bohemian Rhapsody,” drops to second for 20th Century Fox with a $30.8 million weekend that brings its overall take to $100 million. Interestingly, reviews continue rising for the biopic on Rotten Tomatoes. When the film first opened, they were at 40 percent, and now they’ve risen to 62 percent.

“Bohemian Rhapsody” has sparked renewed interest in Queen songs, benefiting an unusual owner of the music: Disney, which bought rights to the Queen catalog almost 30 years ago for its little-known Hollywood Records division.

Illumination, the Universal-owned animators behind “The Minions” and “Despicable Me,” produced the latest interpretation of Seuss’ 1957 book that led to a 1966 TV special and first came to the big screen as a live-action feature starring Jim Carrey in 2000.

Domestic ticket sales for the movie were on par with those for the first installment in Illumination’s blockbuster “Despicable Me” franchise. The first “Despicable Me” collected $56.4 million over its first three days in July 2010, or $66 million based on today’s ticket prices. But “The Grinch” fell behind Illumination’s “Dr. Seuss’ The Lorax,” which arrived at $78.2 million in ticket sales in March 2012, after adjusting for inflation.

Paramount Pictures’ war-horror hybrid “Overlord” was third in its first weekend with $10.1 million. Disney’s “The Nutcracker and the Four Realms” brought in $9.5 million and finished fourth in its second week.

Rounding out the top five was “The Girl in the Spider’s Web,” which fizzled with about $8 million in ticket sales. Poor reviews likely held back “Spider’s Web,” an R-rated thriller based on the best-selling novel of the same name. The film cost Sony, Metro-Goldwyn-Mayer and New Regency roughly $43 million to make, not including marketing. Overseas, “Spider’s Web,” directed by Fede Alvarez, has collected $8.3 million.

Personally, it feels like this franchise has been handled poorly here in America. Rather than follow each book like the foreign films did, the first film came out, didn’t do so well, so the studio freaked out and jumped to the book not written by the original author (David Lagercrantz wrote this one, not Stieg Larsson who died in 2004). If you watch the original films with Noomi Rapace, you’ll understand my complaint. You can check out that full series here.

Illumination’s “Grinch,” narrated by Pharrell Williams, gives the title character, voiced by Benedict Cumberbatch, a backstory in an orphanage and fills out the story of his foil Cindy Lou Who.

It’s the second Seuss adaptation for Illumination. Its version of “The Lorax” opened with a comparable $70 million weekend and went on to gross $348.8 million worldwide.

“The Grinch” was widely expected to be No. 1 with few other major openings this weekend, but it surpassed projections that had it bringing in closer to $60 million, continuing what’s become a trend in 2018.

The industry has reached a cumulative box office total of $10 billion faster than in any other year, Dergarabedian said.

The Christmas theme of “The Grinch” could sustain it through the holidays and Universal hopes it has a longer life than that.

“With Thanksgiving coming, we’re poised to have a great run through that,” said Jim Orr, president of domestic distribution for Universal. “Illumination’s created such a classic take on this beloved character that audiences will be enjoying it for a really long time.”

But big rivals loom soon, including “Fantastic Beasts: The Crimes of Grindelwald” next week and “Ralph Breaks The Internet” on Nov. 21.

“We’ve got a lot of competition coming up for family audiences,” Dergarabedian said.

On the plus side for Sony: “Venom,” based on one of the lesser-known superheroes in Sony’s stable, rolled out in China and took in a jaw-dropping $111 million, far surpassing opening-weekend totals for recent Marvel movies. Worldwide ticket sales for “Venom” now stand at $674 million.