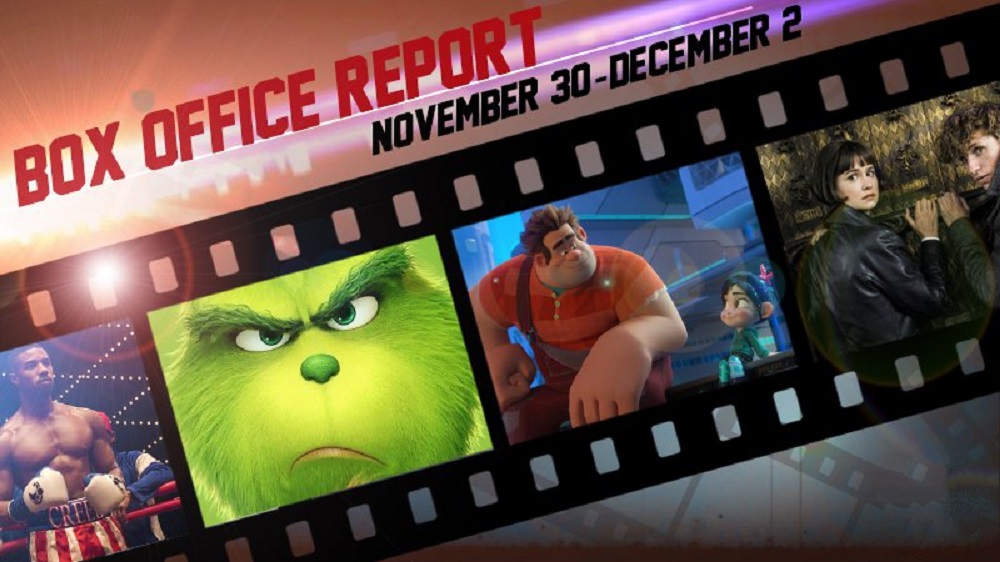 Moviegoers appeared to still be in either a Thanksgiving turkey stupor or resting after Black Friday Cyber Monday, but the only shining star at the box office was Emma Stones “The Favorite.” As expected, Disney’s “Ralph Breaks the Internet” remained in the top spot with $25.8 million in ticket sales, according to studio estimates Sunday.

The “Wreck-It Ralph” sequel dropped steeply (54 percent) after nearly setting a Thanksgiving record last weekend. But with only one new film in wide release, nothing came close to “Ralph Breaks the Internet,” which sends John C. Reilly and Sarah Silverman’s video-game characters into cyberspace. In 11 days of release, the $175 million film has cleared $207 million worldwide.

Still going strong in its fourth week of release, Universal’s “The Grinch” came in second with $17.7 million in ticket sales. “The Grinch,” the Illumination animated production with Benedict Cumberbatch as the Christmas curmudgeon, surpassed $200 million domestically and edged in front of last week’s No. 2 film, the “Rocky” sequel “Creed II.”

Like “Ralph Breaks the Internet,” MGM’s boxing drama also slid sizably after a big holiday opening, declining 53 percent. “Creed II,” with Michael B. Jordan as Adonis Creed, took in $16.8 million in its second weekend. It has thus far grossed $81.2 million on a $50 million budget.

The week’s lone new wide release, the Sony Screen Gems horror film “The Possession of Hannah Grace,” opened modestly with $6.5 million. Orion Picture’s “Anna and the Apocalypse,” a well-reviewed indie mash-up — your standard zombie-comedy-musical — debuted in five theaters, with about $50,000 in ticket sales.

“Crazy Rich Asians” was a hit at the Singapore box office, but, like most comedies, it hasn’t been as much a sensation abroad as it was in the U.S.; it’s earned $64 million overseas. The film’s performance in China, though, is potentially worrisome for Warner Bros. Its planned sequel, “China Rich Girlfriend,” aims to better capitalize on the world’s second largest film market.

One film that didn’t dip much on the weekend was Universal’s “Green Book,” which grossed $3.9 million on 1,065 screens, dropping 29 percent. The uplifting 1962 road trip drama, starring Mahershala Ali and Viggo Mortensen, has struggled to match Oscar buzz with the box office. But last week, “Green Book” was named best film of the year by the National Board of Review, and Universal is hoping it holds strongly in the coming weeks. Positive word of mouth may be kicking in to make this a surprise sweeper with upcoming awards.

“Free Solo” became the year’s fourth documentary to cross $10 million. Elizabeth Chai Vasarhelyi and Jimmy Chin’s documentary about Alex Honnold’s ropeless ascent of Yosemite National Park’s El Capitan rock face, has joined the most lucrative batch of documentaries ever released in a year: “Three Identical Strangers,” ″RBG” and “Won’t You Be My Neighbor?”

It has been a frustrating fall at the box office for films made with the Academy Awards in mind. Damien Chazelle’s “First Man” is officially a flop. “The Front Runner,” starring Hugh Jackman, played to empty theaters. Lower-cost prestige films like “Can You Ever Forgive Me?,” starring Melissa McCarthy, and “Boy Erased,” about the horrors of gay conversion therapy, have struggled to get noticed beyond art houses.

But things seem to be clicking for “The Favourite,” a sharp-edged comedic drama directed by Yorgos Lanthimos and heralded by critics for tour-de-force performances by “A younger audience is finding ‘The Favourite’ along with older cinephiles,” Frank Rodriguez, the head of distribution for Fox Searchlight, said by phone on Sunday. “It’s performing really well in art houses but also in hipper, cooler houses like the Alamos and the Regal Union Square.”

Olivia Colman, Emma Stone, and Rachel Weisz. “The Favourite” took in roughly $1.1 million from only 34 theaters over the weekend, for a per-screen average of $32,500. That figure is in line with early results for “Lady Bird” (A24), which went on to collect $79 million worldwide last year, and surpasses the initial ticket sales for “The Shape of Water” (Fox Searchlight), which took in nearly $200 million worldwide and won the 2018 Oscar for best picture.

Next weekend, “The Favourite” will seek to capitalize on hoped-for Golden Globe nominations — set to be announced on Thursday — by expanding into 100 theaters.