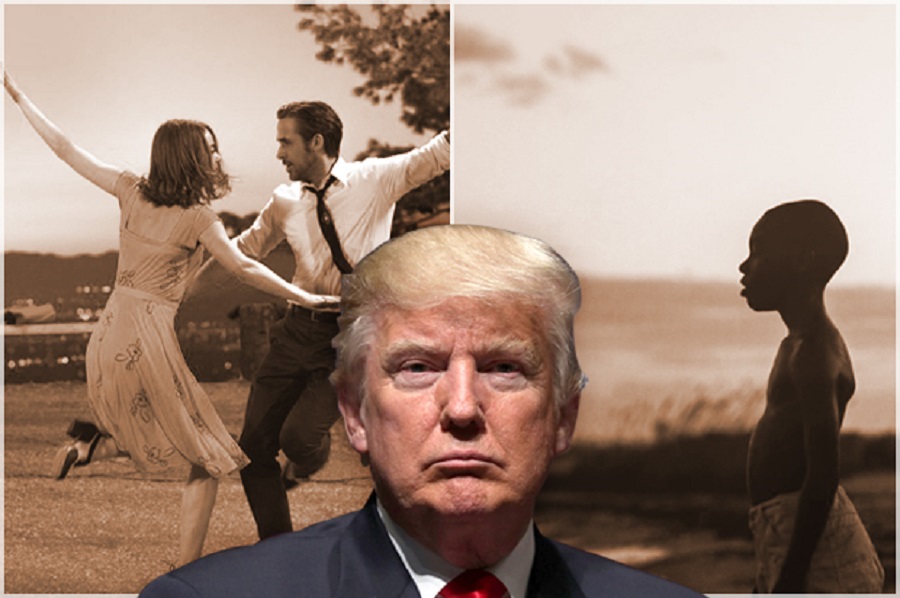 Donald Trump knew that he’d be the subject of a few speeches at the 2017 Golden Globes, so he obviously watched and responded on his trust Twitter after Meryl Streep gave a powerful, graceful and expected acceptance for her Cecil B. DeMille Award.

Streep was very to the point, and you could hear a pin drop during this, but it was one of those speeches that played to the room, but sadly won’t have the impact we would hope for. Trump supporters only dig in further while Trump continues playing victim of the ‘dishonest media’ and ‘liberal Hollywood’ types.

The sunny musical “La La Land” may have danced its way to a Golden Globes record Sunday night, but the film’s seven accolades were a mere sideshow to the eloquence of honoree Meryl Streep, whose speech encapsulated the evening’s prevailing themes of hope, inclusivity and action over anger about the imminent presidency of Donald Trump.

“You and all of us in this room really belong to the most vilified segments in American society right now,” Streep said. “Think about it, Hollywood, foreigners, and the press.”

Without even mentioning Trump by name, Streep, in accepting the year’s Cecil B. DeMille Award, eviscerated the President-elect’s use of his power and rank in the mocking of a disabled New York Times reporter on the campaign trail this year.

“When the powerful use their position to bully others, we all lose,” Streep said, imploring those in the room to remember “the privilege and the responsibility of the act of empathy” and also the vital role of the press in holding “power to account.”

On Twitter early Monday, Trump again denied mocking the reporter and took shots of his own at Streep, calling her “one of the most over-rated actresses in Hollywood” and “a Hillary flunky who lost big.”

Streep’s speech was the kind of show-stopping moment that could make an audience forget that they’re watching what is generally a booze-soaked, star-studded party of irreverence and a few inevitable left-field winners in the annual Awards season stop on the way to the Oscars. The only true shocker there was Aaron Taylor-Johnson’s supporting actor win for his performance in Tom Ford’s “Nocturnal Animals” over favorites Mahershala Ali from “Moonlight” and Jeff Bridges from “Hell or High Water.”

As expected the joyous Los Angeles-set musical “La La Land” swept the awards, winning all of its leading seven nominations including

Emma Stone, Ryan Gosling and Damien Chazelle all spoke of the film’s hopeful message of pursuing dreams despite obstacles. The escapism of “La La Land” was contrasted with the realism of Barry Jenkins’ coming-of-age drama “Moonlight,” which won its only award of the night for best motion picture drama, possibly foreshadowing an ideological showdown between the two very different films at the Oscars, whose nominations are announced on Jan. 24.

While “Moonlight” didn’t shine as brightly as expected at the Globes, just one year after a second-straight season of OscarsSoWhite protests, the night was notable for the widespread diversity of its winners, in film and TV. Donald Glover’s “Atlanta” won best comedy series over heavyweights like “Veep” and “Transparent” and later added best actor in a comedy.

“I really want to thank Atlanta and all the black folks in Atlanta,” said a stunned-looking Glover.

Tracee Ellis Ross, accepting the award for best actress in a TV comedy for “Black-ish,” dedicated her award to “all of the women of color and colorful people whose stories, ideas, thoughts are not always considered worthy and valid and important.”

“I want you to know that I see you, we see you,” said Ross, who was the first black woman to win in the category since Debbie Allen in 1982.

Viola Davis, who won the best supporting actress award for Denzel Washington’s adaptation of August Wilson’s “Fences,” said that Wilson’s words and subjects were so important to her because “very seldom does the average person get their due, especially people of color.”

Davis continued what appears to be a certain path to the Oscar. Another favorite, Casey Affleck, also padded his favorite status. The “Manchester by the Sea” star took best actor.

While there were milestones and progress to be celebrated, Trump loomed nonetheless, even if explicit remarks during the show were kept somewhat to a minimum, save for host Jimmy Fallon, who was criticized for his allegedly softball interview of Trump on “The Tonight Show,” and Hugh Laurie. Fallon, in his opening monologue, compared the president elect to the belligerent teenage king Joffrey of “Games of Thrones.” Laurie, accepting for “The Night Manager,” said “I accept this award on behalf of psychopathic billionaires everywhere.”

Backstage, however, was a different story. Davis, for one, wondered what Trump’s Presidency says about Americans.

“There is no way that we can have anyone in office who is not an extension of our own belief system,” Davis said. “What does that say about us? I think if you can answer that question, it says it all.”

Janelle Monae, who co-stars in “Moonlight” and “Hidden Figures” also said that while “anybody who is representing hate is part of the problem” she hoped that “at the end of the day, we can all remember that we all bleed the same color.”

In an evening of such inclusiveness, there was a glaring flub made twice on Sunday that had nothing to do with a malfunctioning teleprompter. Both red carpet reporter Jenna Bush Hager and then Michael Keaton during the show both mistakenly called the NASA film “Hidden Figures,” ”Hidden Fences.” It quickly became a popular, if dismaying, joke on social media.

In television, as expected, “The People v. O.J. Simpson” took best miniseries, as well as an award for Sarah Paulson. And Netflix‘s Elizabeth II series “The Crown” won both best drama series and best actress in a drama series for Claire Foy.

The ceremony included a memorial reel, which was added following the recent deaths of Debbie Reynolds and Carrie Fisher, who were laid to rest Friday in Los Angeles. Streep quoted the latter to end her speech.

BEST PERFORMANCE BY AN ACTOR IN A LIMITED SERIES OR MOTION PICTURE MADE FOR TELEVISION
Riz Ahmed, The Night Of
Bryan Cranston, All the Way
Tom Hiddleston, The Night Manager
John Turturro, The Night Of
Courtney B. Vance, The People v. O.J.: American Crime Story

BEST PERFORMANCE BY AN ACTRESS IN A SUPPORTING ROLE IN A SERIES, LIMITED SERIES OR MOTION PICTURE MADE FOR TELEVISION
Olivia Coleman, The Night Manager
Lena Headey, Game of Thrones
Chrissy Metz, This is Us
Mandy Moore, This is Us
Thandie Newton, Westworld