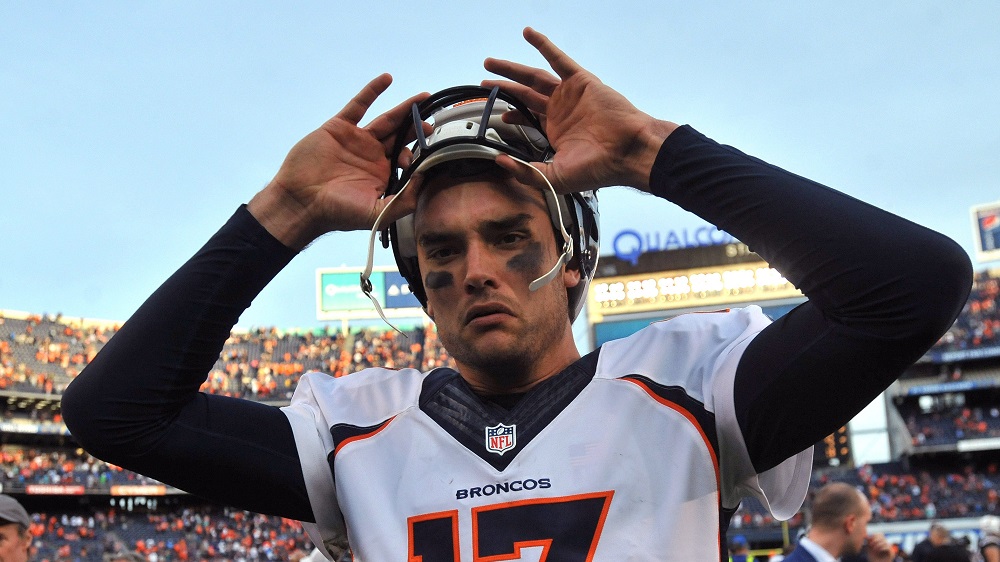 It’s not often that I have pity for a millionaire athlete. But I made an exception for Brock Osweiler this year.

Game after game he got worse, and my sympathy for the newly wealthy Houston quarterback grew.

Dude is living in a gated community worth more than my entire city…..and I felt sorry for him.

Pretty laughable, yet I couldn’t believe how far and fast he fell. This guy could have been the winning quarterback of the Super Bowl last year. There was no difference in his ability and Peyton Manning‘s as the season wound down.

The defense carried that Broncos team to the Super Bowl win. Osweiler was just as worthy to come along for the ride as their QB1 as Manning. It just didn’t work out that way in the end.

Then he strikes gold in the free agent market, leaving Denver to count on two untested passers to help defend their world championship belt. How’s that working out Mr. Elway (all due respect)?

Things went downhill quickly for Osweiler, who was able to buy any home he chose, but looked like the worst starting quarterback in the NFL almost every week.

He ended the regular season ranked 27th in QB play, just ahead of lowly passers like Kaepernick, Fitzpatrick, and Keenum. Osweiler threw 15 touchdowns and 16 picks. Matt Ryan threw 23 more touchdowns while giving the ball away on interceptions just seven times.

Not a fair comparison with Ryan having the year of his life. However, even Osweiler’s replacement in Denver, Trevor Siemian had a better TD / INT ratio with 18 / 10.

You can see how Brock Osweiler, even though he hit the NFL lottery by being a free agent at just the right time, was worthy of sympathy.

Even before the Raiders and Texans began their Wild Card game, I felt like Jon Gruden was being ridiculous saying that Osweiler could turn his disastrous season around with a big performance in round one.

We had seen nothing to indicate the Houston QB could flip the switch when it mattered most.

Gruden just needed something to say in order to fill time until kickoff of course. What was he gonna say…. “Whichever QB sucks the least will give their team the edge?”

The fact is that while Osweiler didn’t make himself look like Peyton Manning of 2013, he did outplay the opposing QB. We all know that opponent was a rookie who was starting his first game as a pro. Still, Osweiler did his job better than Connor Cooke.

And doing his job well enough to win games is what Osweiler is getting paid to do. Peyton Manning didn’t earn his money last year, even though he was listed as the starting quarterback for the Super Bowl champs.

Von Miller and the rest of the Broncos defense made up for Manning’s lack of production on offense.

The same thing happened in round one for Houston. Another NFL millionaire has finally come into his own. Jadeveon Clowney is evolving into a dominant defender after not fulfilling his side of his contract early in his career. He made life hell for Cooke yesterday as if the rookie would have had an easy time if no defender ever even touched him.

Clearly, round two won’t be such a cakewalk for Osweiler. It’s likely he and the Texans will have to travel to New England to take on a team with a legend at QB unless Miami were to upset the Steelers.

In that matchup with the Pats, it will take more than a defensive effort to get the win. And more than a 14/25 showing from Brock Osweiler.

The Texans could have the defensive game of the year and still not keep Brady from racking 20+ points.

Will anyone give Houston a chance in round two? No way.

But at least Osweiler has climbed up a peg or two from getting pity from people like myself. Gruden was correct. The playoffs can erase a lot of bad memories from the regular season.

Osweiler did that, even with a low-key performance.

That could be quickly forgotten though, and the pity renewed if he gets embarrassed by a Belichick or Chiefs defense next weekend.