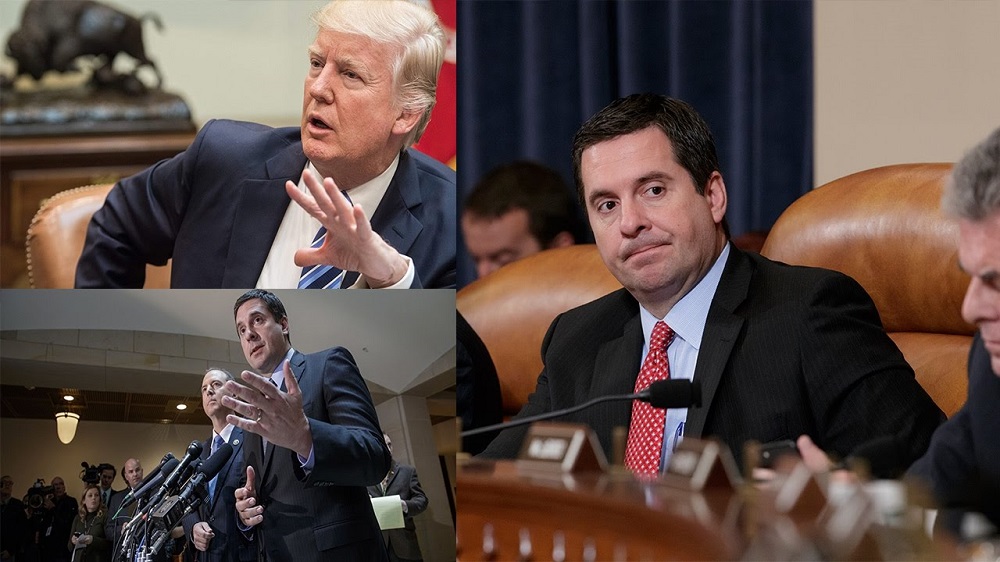 House Intelligence Committee Chairman Devin Nunes was a name that most Americans had never heard of until last week. Then the very strange world of Donald Trump‘s Russian connections brought the Congressman into a spotlight he appears to be enjoying.

For a man heading up a committee investigating Trump’s possible connections with Russia, he seems like he is determined to mess it up beyond belief. His antics have begun to have an effect on the Senate committee’s investigation into the same matter, and it’s beginning to follow a pattern which should be very concerning to most Americans.

The more these committees are made to look like they can’t be trusted to do a truly bipartisan job with this investigation, the better it works for our president. That’s why Nunes’ actions appear to be deliberate and not just accidental any longer.

When he went running to do a press conference at that Capital last week before darting off to the White House and then another press conference, you could possibly excuse it as not understanding his job. Now he’s cancelling committee meetings on the investigation and continuing to do things guaranteed to mess things up, even Republicans are beginning to quesions his motives.

Rep. Jim Himes, D-Connecticut, told CNN’s Kate Bolduan Monday that Nunes’ actions were “bizarre” and “loopy,” adding that Nunes has told Democrats “nothing” about developments in the investigation.

“Whatever it is he’s done, it has been at the White House, it appears to have been in the service of the White House, and so, it is very clear that he owes us an explanation,” Himes said on “At This Hour.”

Just when things seemed really squirrelly now that Ivanka Trump and Jared Kushner are about to run every facet of the government, Nunes brings out another strange revelations. It turns out he was at the White House the night before his big announcement. Naturally, the White House seems to have no idea he was even there.

A former government intelligence officer has informed media outlets that this would never be the case as members of Congress must be cleared and escorted into all facilities on the White House grounds.

Nunes made it sound like he just wandered onto the grounds without anyone noticing he was there.

This is only making it appear that Nunes’ ‘source’ was the White House. This administration continues making themselves look very guilty by rarely telling the truth. Even on the simplest things, they do something that continues creating yet another Russian connection.

The @realDonaldTrump @WhiteHouse is obstructing Congress's #RussianHacking investigation. Ind. Commission is only path to find the truth. https://t.co/TNa370VdT2

Two congressional sources said Nunes was with a staff member Tuesday night when he got a message, got out of the car and got into an Uber. Staff did not hear again from him that night.

They next heard from Nunes Wednesday morning, the day he scheduled a news conference before going to the White House. The staff do not know where he went Tuesday night.

Nunes pushed back strongly against an account in The Daily Beast that suggested efforts of subterfuge in his path to his sources that day.

“I was in a cab with staff and we dropped them off before I went to my meeting,” he said. “Anything other than that is just false.”

The ranking Democrat on the committee called on Nunes to recuse himself from the Russia investigation along with several other members of Congress.

“But in much the same way that the Attorney General was forced to recuse himself from the Russia investigation after failing to inform the Senate of his meetings with Russian officials, I believe the public cannot have the necessary confidence that matters involving the President’s campaign or transition team can be objectively investigated or overseen by the Chairman,” Rep. Adam Schiff, a California Democrat, said in a statement.

Nunes refuses to step down, but he’ll soon learn that when you get caught up in Donald Trump’s vortex, he’s the only one ever left standing unscathed. 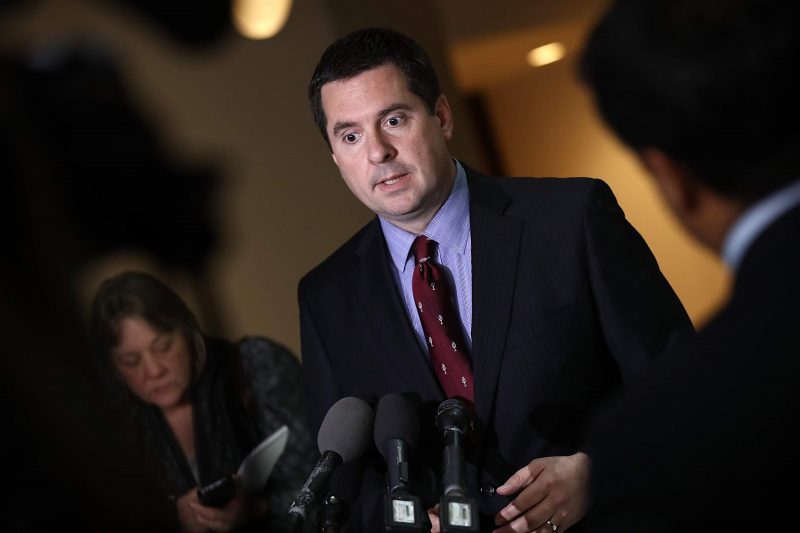 Potential White House entanglement in Congress’ investigation of Russian meddling in the 2016 election brought new cries of protest from Democrats on Tuesday as fresh political allegations clouded the probe.

Devin Nunes, the chairman of the House intelligence committee which is conducting one of the congressional investigations, turned aside calls to step aside. Later in the day, the White House vehemently denied a report that it had sought to hobble the testimony of a former acting attorney general before Nunes canceled the hearing where she was to speak.

“If the president puts Russian salad dressing on his salad tonight, somehow that’s a Russian connection,” he suggested.

The embattled House committee is conducting one of three probes into the election campaign, its aftermath and potential contacts between Trump officials and Russians. The Senate intelligence committee is doing its own investigation, and since late July the FBI has been conducting a counterintelligence investigation into Russia’s meddling and possible coordination with the Trump campaign.

Nunes’ decision to cancel Tuesday’s hearing was the latest in a series of actions that Democrats contend demonstrate that his loyalty to Trump is greater than his commitment to leading an independent investigation. The California Republican, who was a member of Trump’s presidential transition team, has said he met with a secret source last week on White House grounds to review classified material that showed Trump associates’ communications had been captured in “incidental” surveillance of foreigners in November, December and January.

Nunes would not name the source of the information, and his office said he did not intend to share it with other members of the committee.

Nor would he disclose who invited him on the White House grounds for the meeting. He described the source as an intelligence official, not a White House official. In an interview on CNN, he suggested the president’s aides were unaware of the meeting.

Trump has used Nunes’ revelations to defend his unproven claim that Barack Obama tapped phones at Trump Tower. In a series of tweets Monday night, Trump said that instead of probing his associates, the committee should be investigating his Democrat opponent Hillary Clinton‘s ties to the Kremlin.

“Trump Russia story is a hoax,” he tweeted.

Adding to the swirl of questions was the publication of a series of letters dated March 23 and March 24 involving a lawyer for former Acting Attorney General Sally Yates.

Yates, along with former CIA Director John Brennan and former director of national intelligence James Clapper, had agreed to testify publicly before the House intelligence committee.

The canceled hearing would have been the first opportunity for the public to hear Yates’ account of her role in the firing of Trump’s first national security adviser, Michael Flynn.

The letters from lawyer David O’Neil, published by The Washington Post, appeared to be in response to a meeting O’Neil had at the Justice Department on March 23 in advance of the hearing.

In them, O’Neil pushes back against what he says is Justice Department guidance on what Yates could say about conversations she had with Trump – conversations the department indicated could be covered by executive privilege.

“We believe that the Department’s position in this regard is overbroad, incorrect, and inconsistent with the Department’s historical approach to the congressional testimony of current and former senior officials,” O’Neil wrote in a March 23 letter to Justice Department official Samuel Ramer. He also wrote that Yates’ testimony would cover details that others have publicly recounted.

The Justice Department responded to O’Neil saying that the question of what privileged conversations Yates could discuss was ultimately up to the White House.

Spicer on Tuesday said the White House never sought to stop her. “We have no problem with her testifying, plain and simple,” he said.

O’Neil declined to comment Tuesday, and a Justice Department spokeswoman did not return a message seeking comment.

Yates was fired in January as acting attorney general after she refused to defend the Trump administration’s first travel ban. She alerted the White House in January that Flynn had been misleading in his account of a December phone call with the Russian ambassador to the United States in which economic sanctions against Russia were discussed. Flynn was ousted after those discrepancies were made public.

Virginia Sen. Mark Warner, the top Democrat on the Senate intelligence committee, said that White House meddling is not helping to “remove the cloud that increasingly is getting darker over the administration.”

Democratic members of Nunes’ House committee said his ability to lead a bipartisan probe is compromised.

“It’s irregular, to be benign about it, to have a lead investigator kibitzing with the people being investigated,” said Rep. Jim Himes, D-Conn.

House Speaker Paul Ryan reiterated his support for Nunes, and Nunes himself said all of the controversies were standard for Washington.

“It’s the same thing as always around this place – a lot of politics, people get heated, but I’m not going to involve myself with that,” he said.