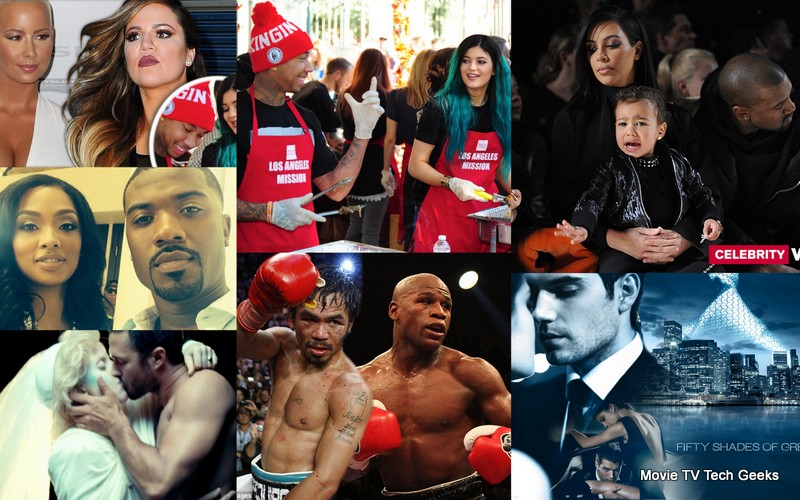 The celebrity gossip mill is ever churning isn’t it? So much drama in the LBC I tell you. Here’s the best of the best:

The newest celeb feud involves Amber Rose and the Kardashians with Wiz Khalifa in there somewhere. Over the weekend, some twitter beef was started when good ole Amber, when asked about the friendship between Kylie and Tyga on Power 105.1’s The Breakfast Club stated, “She’s a baby… She needs to go to bed at 7 o’clock and relax.” So you know how the K Club rolls. Khloe took to Twitter on Monday in a series of posts about Rose that attacked her past and her present, “’I was a stripper since I was 15 years old,’ Amber Rose told Foxx. Please don’t worry about my sister who has a career & her shit together at ONLY 17.” It has just gotten deeper and more heated since then. I have to give it to Khloe though, her responses are quite adult for the uberly famous. “We get asked questions about people all the time and my sisters and I always take the high road and don’t answer… I’m not going to comment on someone I don’t know.”

All of this has caused Tyga to openly say that he and Kylie are not dating. I hear you Tyga, but that still doesn’t explain why you guys are always hanging out. I mean, you’re 25 she’s 17. I don’t get it. All this has also lead to Wiz taking jabs at his ex on her mothering abilities. He wants more custody of their one year old son because he says Rose is a bad mom staying out all night and allowing their dog to eat its own feces and then lick Sebastian’s face. According to Khalifa too, she does not spend any time with their son which is prompting him to start the legal process of filing for a change in their custody agreement.

North West can add this to the list of things she has accomplished before the age of two- babies are banned from New York Fashion Week thanks to her. According to VH1.com, Nori has thrown tantrums on a few occasions during the past five days which has led the higher ups to enact a “no babies” rule. I get it too. Babies don’t need to be at an event like NYFW. They don’t know what’s going on and they just kind of get in the way.

In lovers news, singer Lady Gaga and actor Taylor Kinney are engaged. Like seriously, didn’t even know they were together. He proposed with a huge heart shaped diamond ring on Monday. Maybe he is the reason she has really toned down her persona, I mean at this rate, she may soon go by Stephanie. Either way good for them (now let’s see how long this lasts).

For those who have not seen Fifty Shades of Grey, take it from me, you don’t want to. Over the weekend I ventured to the movies to see what the hype was all about. I previously wrote that critics slammed the movie and on Sunday I saw firsthand for myself why they did. It is a horrible, unreal, boring, haphazard attempt at film making. The sexiest thing in the movie is the car Christian gives Anastasia for her graduation. See it if you want to, but you will spend the whole two hours and nine minutes waiting for a climax that never happens.

Boxing fans, the fight of the century may actually take place and may actually be closer than we thought. Negotiations for Manny Pacquiao and Floyd Mayweather are nearly finished as Pacquiao agrees to a drug test. This is huge. For the record, I am usually all about other Pieces winning but it’s hard for me to root for Mayweather (and we share the same birthday) because he is just so damn cocky. Nonetheless, I am interested to see how things go because I think this fight will prove once and for all if he is really as bad as he claims to be.

And finally, Ray J was reportedly beaten up by his girlfriend Princess Love. Now let me explain what I mean by beaten up. Really, he got his ass whooped. He sustained broken ribs, a busted lip and a torn ACL. The fight went down in New Orleans last week after he returned to their hotel room from chilling in a strip club with some TV producers. Well damn, Ray, I understand not wanting to hit a woman but to let her do you in like that, you my dude. You must have been really drunk or she must be really strong.