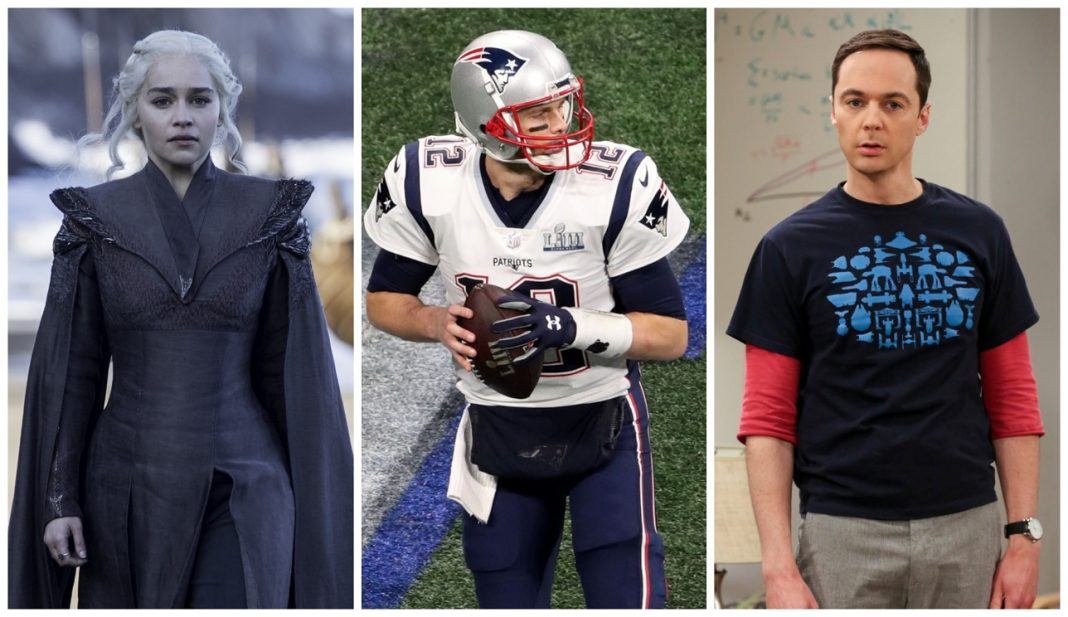 NBC may have lost both the Super Bowl and Olympics, but it was able to hold onto that ever important 18-49 demographic. It even slipped by 27 percent in that demo along with 19 percent in total viewers, but that was still a major win for network tv. CBS was the winner in total viewers. That says a lot of how shaky the network TV market has become without any sign of leveling out.

TV ratings continue to be in a steady decline as programming gets better on so many other channels. It’s nothing to have your DVR recording four shows at the same time, but this doesn’t help the traditional networks. This year’s television upfronts were more about ‘reach’ than ratings since the landscape is continually shifting.

Now, rather than just saying we’re number 1, some are touting live plus 7 day stats to include the every important viewing on demand or through DVRs. That’s a lot of combos which is forcing advertisers to continually reassess their budgets.

“We went from households to demos and now we’re going from demos to more data-driven decisions,” said CBS Entertainment president Kelly Kahl. “The business has always been more complex than melting a network’s health down to an 18-49 number. This is the industry saying, yeah, there’s something more than just boiling things down to one number.”

Fox executive vice president/head of research Will Somers said as ratings diminish, he still sees them as “part of what’s an increasingly fragmented puzzle, but an incomplete one. What you’re seeing is continued progression away from conventional metrics.”

“Reach” is one way to guide advertisers, he added, but it’s not a perfect stat either.

The Masked Singer: The season’s biggest breakout hit, Fox’s costumed singing competition is the No. 1 new series in adults 18-49 by a wide margin: Its 3.8 rating in the demo, including a week of delayed viewing, is a full point ahead of NBC’s Manifest. It is tied with This Is Us and The Big Bang Theory for the top entertainment series overall. Fox is betting big on the show next season, with two cycles and a post-Super Bowl premiere for the second.

The Big Bang Theory: Although it declined in its 12th and final season, the CBS comedy is going out as network TV’s most-watched series, averaging 17.5 million viewers. The series finale clocked in with 18.5 million viewers, growing to a massive 23.44 million after three days.

The Chicago franchise: Stacking Dick Wolf’s Windy City-set shows on Wednesday nights proved to be a boon for NBC: All three are steady in adults 18-49 — no small thing in a season when the vast majority of broadcast shows declined — and Chicago Med, Fire and PD are also having their most-watched seasons ever, averaging better than 11 million viewers apiece.

The CW‘s Sunday night: Supergirl and a remake of Charmed didn’t make the Big Four sweat, but they accomplished their goal for The CW in providing a starting point for more original programming across its linear and digital platforms.

The NFL: Despite a down Super Bowl, the safest bet on broadcast TV improved across the board in 2018-19. Every regular-season broadcast window and all three rounds of the pre-Super Bowl playoffs improved on the prior year.

Game of Thrones: Plenty has been written about the success of the final season of HBO’s juggernaut, but nonetheless it’s remarkable to see a show available to a fraction of TV households — about 35 to 40 percent of the country — rank No. 1 among adults 18-49, and beat all but two broadcast shows (available in nearly 100 percent of the country) in total viewers.

The Voice and American Idol: While The Masked Singer took off, these two veteran singing competitions took it on the chin. The Voice‘s two weekly shows declined by double digits in adults 18-49 (16 percent on Mondays, 13 percent on Tuesdays in live-plus-7 ratings). Idol fell by 19 percent on Sundays and 25 percent on Mondays.

CBS’ 9:30 p.m. Thursday time slot: The network went 0-for-3 with the last piece of its Thursday comedy block: The Murphy Brown revival arrived with a lot of hype and not enough viewers, ending after its initial 13 episodes and getting canceled in May. Midseason entry Fam came and went with scarcely a blip, despite marketable young stars Nina Dobrev and Tone Bell. Now Life in Pieces is a dead show walking.

Superheroes: In addition to the aforementioned The Gifted, the five DC Comics shows on The CW were down a collective 25 percent in adults 18-49 vs. last season. The final run for Gotham on Fox declined by 15 percent year to year. Agents of SHIELD‘s future is safe on ABC, as it received an early seventh-season pickup, but it’s likely to come in below last season as it runs into the summer.

Comedy: As TV’s No. 1 comedy, CBS’ The Big Bang Theory, goes away, the networks are finding it difficult to make viewers laugh. Among adults 18-49, CBS’ Young Sheldon and ABC’s Modern Family and The Conners are the only other sitcoms in the top 25, while the total viewers top 25 only features Big Bang, Young Sheldon and Mom in the top 25. Perhaps it’s another example of audiences shifting to other platforms: At the upfronts, NBC proclaimed that The Good Place is actually its most-viewed series — thanks to non-linear viewership. In the traditional total viewers ranker, which does feature seven days of time shifting, the comedy barely squeaks into the top 100.

“Comedy is something we’re all trying to figure out,” said one network exec. “That’s been a recurring theme for a long time. We’re trying to break the comedy code, and we’re all going to give it a shot in our own way next season. Hopefully someone finds the right DNA for a comedy hit.”

The remake trend: Last year’s No. 1 show, Roseanne, didn’t return — for reasons everyone’s pretty familiar with by now. Its replacement, The Conners, did very well, all things considered: It’s broadcast TV’s top-rated new comedy, if you consider it a brand-new show, averaging a solid 2.3 rating in the demo — justifying ABC’s desire to bring the show back even without star Roseanne Barr. But it’s no Roseanne, which ended the 2017-2018 TV season with a 6.2 rating.

Still, that number was destined to come back to earth, similar to NBC’s high-flying launch of its Will & Grace reunion, followed by that show’s sharp downward turn. Will & Grace averaged a 1.5 rating in the demo, vs. 2.8 last year. Meanwhile, CBS’ Murphy Brown return never got off the ground, averaging a 1.3.

“The Passage” and “Life in Pieces”: The Fox drama The Passage was this season’s highest-rated series in adults 18-49 not to secure a renewal, while CBS’ comedy Life in Pieces is so far the most-watched series to be canceled. (Some shows, however, remain on the bubble, as the networks haven’t announced the fates of several late-season series.)

R. Kelly: The disgraced pop crooner is finally getting his due in the court of public opinion. Accused by multiple women of sexual assault and statutory rape, Kelly was the subject of Lifetime’s Surviving R. Kelly, a six-part series that told the story of his victims and was a smash for the channel. Surviving R. Kelly was the No. 3 non-sports series on cable this season among adults 18-49, behind just AMC’s The Walking Dead and FX’s American Horror Story.

Appointment TV: It might sound harsh, but it is a sign of the times that two of linear TV’s biggest hits, Game of Thrones and The Big Bang Theory, are both departing in the same year. In other words, this ranker will look much different next season.

“I don’t believe this is the end of mass appeal shows,” Kahl said. “There are still plenty of shows in the top 20 that are getting tens of millions of viewers every week. Perhaps this opens the door for the kind of next cultural phenomenon show to step up and get some traction. Is it harder these days with so many choices? Yeah, it probably is. But I don’t think by any means it’s the end of an era.”