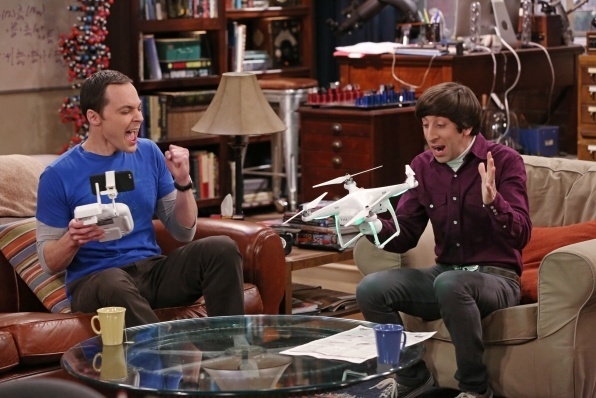 On this week’s episode of Big Bang Theory Penny (Kaley Cuoco) and Leonard (Johnny Galecki) were preparing to take a trip so that Leonard could speak at a graduation ceremony at the New Jersey high school he graduated from.

As Penny and Leonard were leaving their apartment building to head to the airport Leonard got a text that their flight to New Jersey was cancelled due to a storm front hitting the East Coast.

Howard (Simon Helberg) and Sheldon (Jim Parsons) had a toy helicopter that was supposed to record video of the helicopter being used and stream it to a smart phone, but they were having a hard time getting it to work properly. Meanwhile, at Raj’s apartment his dad placed a video call to him. His dad asked Raj if he and his girlfriend were still together and Raj said they were. He then asked Raj why he had spent so much money on the helicopter Sheldon and Howard were trying to figure out how to use. He then said that to teach Raj a lesson he was cutting off his allowance.

After Sheldon and Howard tried relentlessly to get the toy helicopter to work Howard said he could take it apart to fix it because he’s an engineer and he knows what he’s doing. After he and Sheldon did take it apart Sheldon asked Howard if he knew what each of the parts of the helicopter did. Raj then came into the apartment to tell Howard and Sheldon that his dad cut off his allowance and freaked out at seeing all the pieces of the helicopter spread out on the kitchen counter. He told them they had to put it back together because he had to return it to the store he bought it from. Raj then called his mom and told her his dad had told him that he would no longer be able to send money to Raj due to the man’s active social life. Raj’s mom then questioned what his dad meant by an “active social life.” His mom then asked Raj if his dad was dating anyone and he said he didn’t know. Raj talked his mom into giving him more allowance money than his dad had been giving him. He got so excited upon hearing this that he said he would buy toy helicopters for everybody.

Penny came home with a cap and gown so that Leonard could put them on and recite the speech he was going to make at the graduation ceremony. She had called his high school and gotten them to agree to let him make his speech at the ceremony by using Skype. She then admitted that she got the cap and gown from a costume shop that only had it in women’s sizes. When Leonard put the gown on and came out to show Penny it was much shorter than a man’s graduation gown should be.

Leonard then gave his commencement speech at his Alma matter’s graduation ceremony. One of the first things he did during the speech was to thank Penny for setting it up so that he could deliver his speech via Skype. He then diverted from his planned speech because he said he had hated what he had written. Leonard then admitted that when he was in high school he felt like he didn’t even exist. He then said his speech was for the kids who, like him, never fit in. He then finished his speech and congratulated the graduating class.

Howard finally got the toy helicopter put together but once they tried to turn it on it ended up emitting smoke. Bernadette then asked Howard if he was finally ready to call tech support and he conceded. When Howard called the tech support number Raj’s phone began ringing because his dad was calling him. His dad asked Raj what he had said to his mother. He said that after talking to Raj his mom seemed to think his dad had turned into a play boy. Raj then said his mother has a crazy imagination and that he was glad he took after his dad. Raj then went back into Sheldon and Leonard’s apartment and asked them all if they wanted to fly to Las Vegas in a helicopter.

After Leonard was done giving his speech via Skype (which he did from Penny’s apartment) he and Penny went across the hall to his apartment. Suddenly the apartment door opened and the toy helicopter came toward Leonard and Penny, who crouched down on the floor to avoid being hit by it. The door was closed and then Sheldon opened it again and told Penny and Leonard not to worry because everyone in the apartment was safe now. He then closed the apartment door again.