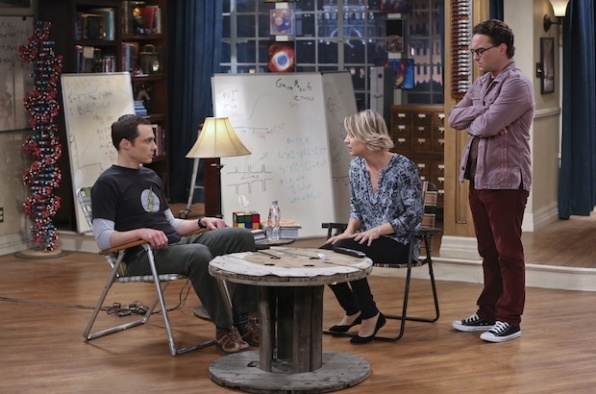 It’s all about moving out and moving in on this episode of “The Big Bang Theory,” and Penny and Leonard told Sheldon that Leonard was moving in with Penny since they are married now. Sheldon went to Bernadette to talk to her about Penny and Leonard. He told her he felt abandoned with Leonard moving out and Amy having broken up with him. Bernadette told Sheldon he should get a new roommate and that maybe Stuart would be interested since he has been living with Bernadette and Howard.

At the comic book store, Stuart asked Raj and Howard if they knew of any musicians looking for a gig. Stuart was trying to get a musician to perform at the store so more people would come in.  Howard and Raj discussed starting a band to perform there.

Sheldon made Leonard sign a contract to move out of their apartment and move in with Penny. At Raj’s apartment he and Howard made plans for their band. They discussed song lyrics and put the lyrics to music.

Sheldon interviewed candidates to be his new roommate. He asked all of them typical Sheldon questions. The last person he tried to interview as a roommate was Amy. She said she would not room with him but she was sure he could find someone else. Sheldon said Amy, Penny and Leonard poisoned him with emotions.

Penny and Leonard ran into Sheldon in the hall of their apartment building and invited him out to dinner with them. Sheldon told them he has become too emotional so he was going to restore his life to the way it was in 2003 when he had no emotions and hadn’t met Leonard yet.

Leonard and Penny went out to a restaurant for Thai food because when Leonard lived with Sheldon they get Thai food one night a week. Leonard said he was worried about Sheldon.

Bernadette and Amy had dinner together and Bernadette said she couldn’t believe Sheldon asked Amy to be his roommate. She asked Amy if Amy knew anyone Stuart could move in with. Bernadette called Sheldon a weirdo and Amy defended him.

Meanwhile, at the apartment, Sheldon arranged the furniture the same way it was in 2003 before Leonard moved in with him. Leonard and Penny came in the apartment and Sheldon said he was trying to learn to live without the people who left him. Leonard pointed out that he hadn’t left Sheldon and he only lived across the hall.

Raj performed his and Howard’s song for Emily. She said the song was very cute and Raj disagreed. She said she liked music she could dance to and Raj showed her how she could. Then he went to Howard’s house and told him the song wasn’t right and they needed to change it. Howard argued that the song they wrote was supposed to make people think. He figured out that Raj played the song for Emily and she didn’t like it so now he didn’t either. Howard said Emily was breaking up their band and then they both quit it.

Penny told Sheldon that she and Leonard would take turns sleeping at Sheldon’s apartment and at Penny’s apartment. Sheldon then said he had to draft a new roommate agreement.

Raj and Howard performed their song at the comic book store for Leonard, Penny, Sheldon, Bernadette, Stuart, and Emily. At the end of the performance Stuart said he’d prefer a song they could dance to.