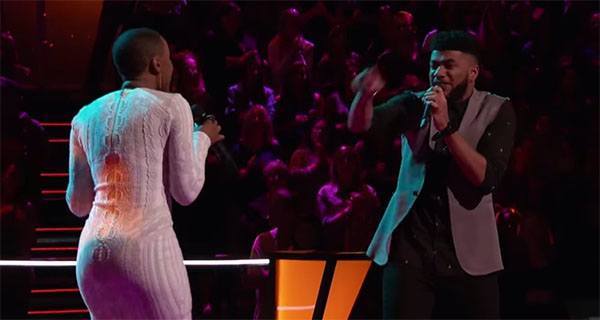 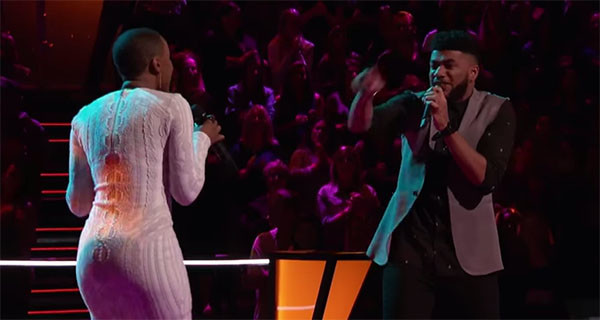 It was the first round of the battles on NBC’s The Voice. In the battle rounds, the four coaches – Gwen Stefani, Blake Shelton, Adam Levine and Pharrell Williams – pit two of their team members against each other to duet on a song of their specification. Ultimately, the coaches have to decide who will stay on their team and who will go home. However, each coach is allotted two “steals,” which means they can save one of the other coach’s team members, if they are being sent home.

So here is a recap of the battles from tonight:

Adam decided to pair two of his resident powerhouses together, Jordan and Regina. Adam’s advisor for this season is John Fogerty of Creedence Clearwater Revival, who helps Adam prepare his team members for the battle. 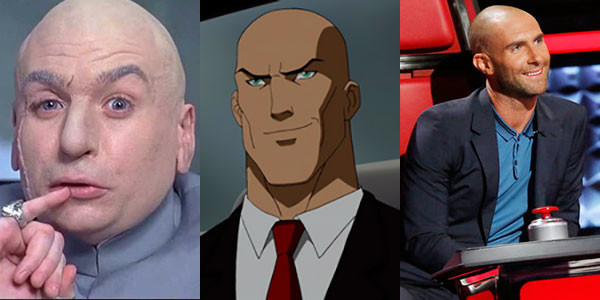 In addition, just before the singers take the stage, Adam all of a sudden appears with his head fully shaved and kind of resembles a Q-tip. Luckily Blake gets in a few digs at Adam’s new look throughout the show.

Both singers are undoubtedly talented and have incredible ranges. However, I found that Regina took pretty much every chance she could to throw in a run and it ended up feeling over sung. In contrast, Jordan was able to control himself more and choose certain moments to highlight his range.

In the end, Adam chooses Jordan to stay on his team and Gwen ends up stealing Regina.

“I’m Gonna Be Somebody” by Travis Tritt

Blake pairs up young country singers Tyler and Zach. Tyler came on to the show with a more country-rock edge, while Zach is definitely the typical boy-next-door with a soft voice.

Blake employs country star Brad Paisley as his advisor this season. After some rehearsal, both Blake and Brad agree that Tyler seems to have the upper hand considering he has been performing since he was young, while Zach just recently decided to take up singing.

However, the tables turn when the two singers hit the stage and Zach completely blows Tyler out of the water. It seems that Tyler was doing exactly what Blake warned him not to do – getting too comfortable with the song and just “going through the motions” when singing.

“Sweater Weather” by The Neighborhood

Gwen pairs up Ellie and Tim for her first battle, as they both have similar raspy qualities to their voices and the “singer-songwriter thing” going for them. Tim’s audition wasn’t shown so this is the first time that the audience gets to see him perform.

Gwen’s advisor for this season is pop star Selena Gomez, who just recently released her album, Revival. During their rehearsals, Ellie is right away the obvious stand out, as Tim seemingly hides away strumming his guitar. This leads to Gwen forcing Tim to ditch his guitar, as well as an impromptu lesson from Gwen on how to have stage presence.

Unfortunately for Tim, Ellie’s voice continues to overpower him in the live battle and she ends up beating him out for the spot on Gwen’s team.

However, Pharrell is intrigued by Tim’s voice and decides to steal him.

Pharrell’s first battle is between gospel singer Celeste Betton and R&B artist Mark Hood. He explains that he decided to pair the two singers together because he felt they were both “super soulful.”

Pharrell brought on Missy Elliot as his advisor for this season and it is pretty clear that Mark is a big fan of hers, as he freaks out when he sees her sitting beside the rehearsal piano. By the end of the rehearsals, Pharrell is astounded and claims he doesn’t have a single critique for either of his team members.

I don’t know if it’s the singers or if it was the song, but their battle didn’t impress me at all (most likely the song, considering at least one pair sings it every single season of The Voice). I will admit that the two did have good chemistry and stage presence.

In the end, Pharrell decides to keep Mark on the team and unfortunately Celeste is unsuccessful in getting a save from the other judges and is sent home.

For his second pairing, Adam put edgy rocker Dustin Mook against country singer James Dupre. Adam decides to put incredible pressure on the duo by assigning them one of CCR’s biggest hits. This means they will be rehearsing and getting critiqued by the song’s original singer and writer, John Fogerty.

During the rehearsals, Adam tells Dustin and James that he needs more from them. John explains to them the reason he wrote the song and the “feelings of anger” that are beneath the song’s lyrics. Adam decides that they will sing a stripped down acoustic version of the song, as he didn’t want it to feel they were simply imitating CCR’s recording of the song.

Unfortunately, neither Dustin nor James really stood out in the battle. It almost sounded like karaoke, as both singers failed to connect to the song like Adam and John had advised them to.

“Walking in Memphis” by Marc Cohn

The last battle of the night was between Blake’s teammates, Barrett and Dustin. Both of these singers are from the country genre and earned themselves four chair turns during their blind auditions. Blake explains the pairing, saying they both have a lot of “raw power” in their vocals.

Brad Paisley helps polish the two musicians’ vocals and after the rehearsals Brad notes that Dustin could possibly have the edge up, as he feels his voice is slightly more unique.

During the performance, both Dustin and Barrett demonstrate precise vocals. While Dustin has a bit more power behind his notes, Barrett shows more character and has a more notable stage presence.

After the battle, Blake declares it to be a tie. However, since this is not how The Voice works, he ends up choosing Barrett. Fortunately, Gwen and Adam both buzz in for Dustin and Adam ends up stealing him.

Tune in tomorrow (Tuesday, October 13) to catch the second round of battles on The Voice.