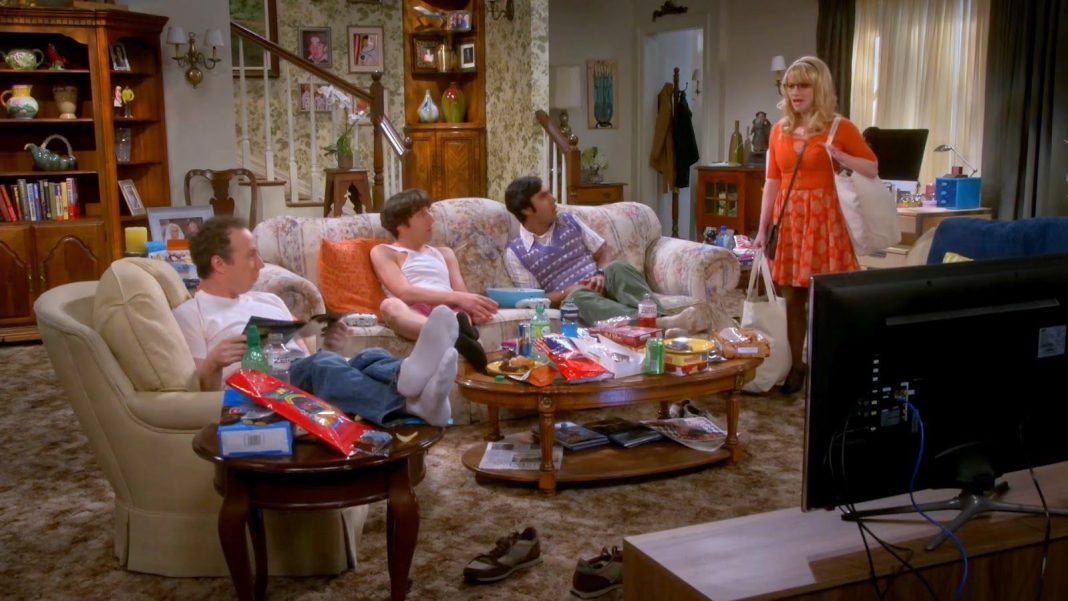 On this week’s episode of Big Bang Theory Penny asked Leonard when his mom’s flight was landing and he said not until the next day. Sheldon and Leonard were receiving an award and both their mothers were flying in to be there for it. Penny said that maybe she should get Leonard’s mom, Beverly, a gift because the woman isn’t very fond of Penny and Leonard’s relationship. Leonard told her not to bother because she would have to go out and get a PHD for his mom to like her. 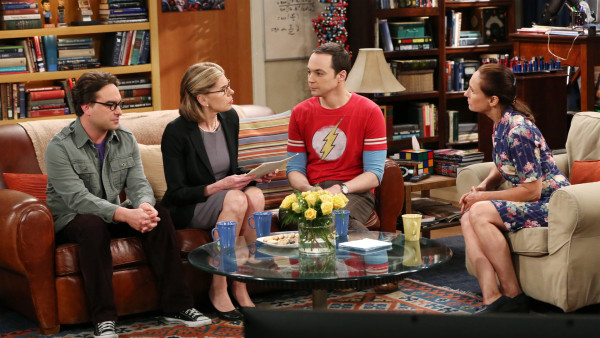 Sheldon’s mom Mary arrived and he told her that Leonard’s mom is a renowned psychiatrist and that his mom needed to avoid preaching religion to her. Leonard came home with his mom and she asked him if he and Penny had set a date for their wedding yet. His mother remarked that they had been engaged for a year and still hadn’t set a date and that made her wonder how the sex was between Leonard and Penny. Leonard then asked his mother not to be as critical of Sheldon’s mom as she is of Leonard. Sheldon greeted Leonard’s mom and then introduced his mom to her.

Mary and Beverly had an awkward conversation and Sheldon showed her some of the math he worked out to support the hypothesis discussed in the paper that he and Leonard wrote that they were receiving the award for. Leonard tried to tell his mom that he was the one who worked out the hypothesis but Beverly told him to calm down. Beverly asked Mary when she first realized how smart Sheldon is.  Mary said that she first realized it when Sheldon was only 13 years old. He wanted to build a nuclear reactor in his parents’ tool shed at that age. Mary said Sheldon didn’t think people should have to pay for their electricity so he wanted to build a nuclear reactor to supply electricity to the whole neighborhood. She said Sheldon wanted to use her credit card to buy uranium off an African warlord.

Raj and Howard were sitting in Howard and Bernadette’s living room playing video games while Stuart read a comic book. Bernadette then came home and said it wasn’t fair that while they were playing video games she had been out running errands. She then told the three of them to stop being lazy and go clean the kitchen. 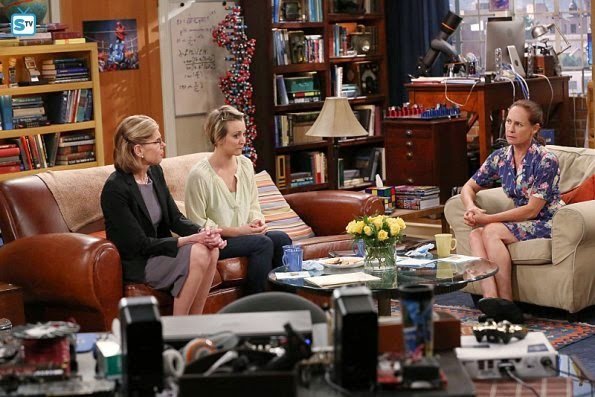 Back at Sheldon and Leonard’s apartment Sheldon showed Beverly pictures from his undergraduate graduation ceremony. Penny then arrived at the apartment and enthusiastically greeted Beverly. Penny then showed Beverly her engagement ring and she remarked that it was lovely and must have been very expensive. Sheldon jumped into the conversation and told Beverly that the ring hadn’t cost much and that they had found it online from a company that repurposes diamond drill bits. Leonard denied this and then asked to speak to Sheldon privately. On the way out of the room Leonard told Penny her engagement ring came from Tiffany’s. 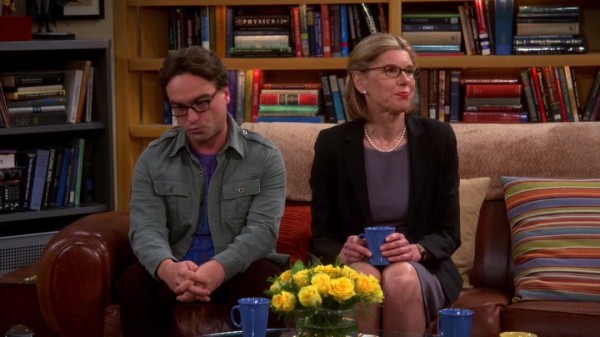 When they were alone Leonard told Sheldon he was dominating Beverly’s time. Back in the living room Penny told Mary and Beverly that they weren’t in a hurry to get married and they would set the wedding date when it felt right to do so. Mary then said it didn’t matter because Penny and Leonard were already married in the eyes of the Lord. Beverly sounded disgusted at that comment and Mary questioned her belief in the Bible as a result. Beverly then insulted Mary by saying she couldn’t believe that as smart as Sheldon is, he is her son. Leonard and Sheldon came back into the living room, still arguing about their mothers. 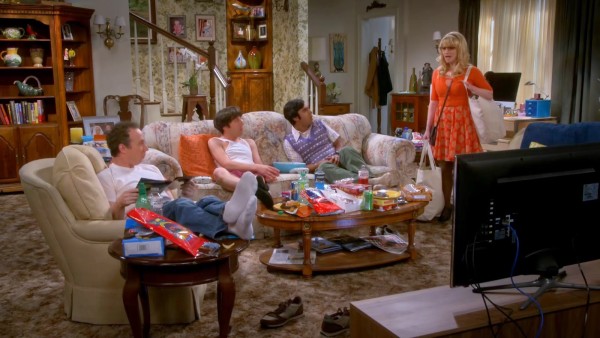 Meanwhile at Howard and Bernadette’s house, Howard, Raj and Stuart were cleaning the kitchen. Raj said it might be good if Bernadette stopped babying Howard. He then said that Bernadette was treating Howard the same way his mother had and that the relationship wasn’t healthy. Howard then said that Raj was right and it was time for Howard to act like an adult in his marriage. He then went to take out the trash and the bag broke, leaving trash all over the kitchen floor. 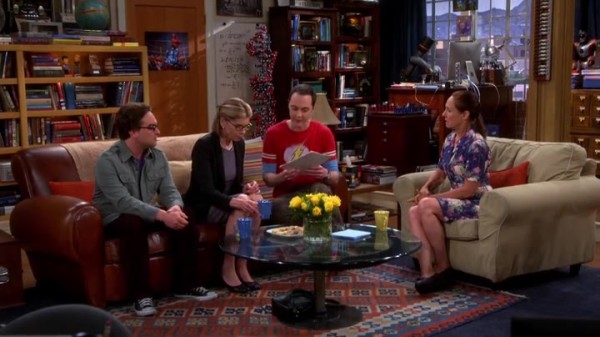 Sheldon took Beverly out for coffee and she said she was sorry she had upset Mary. He said it was all right and that his mom would forgive Beverly because if she didn’t she was going to end up in hell. Back at the apartment Leonard told Mary that Beverly never gave him love or affection growing up. Penny then told Leonard he never had to earn her love like he had to earn his mom’s. Mary told Leonard and Penny that when Beverly came back to the apartment Mary would apologize for how she spoke to her when they met. Mary then offered to make spaghetti and hot dogs for Penny and Leonard.

Beverly and Mary apologized to each other for the way they treated each other when they met. Beverly then told Leonard after talking to Sheldon she wanted to shower Leonard with unconditional love. Leonard then asked when that would start and Beverly exclaimed that he was very needy. She then put her arms out to give Leonard an awkward hug.

Howard scrubbed the kitchen floor again while Raj and Stuart cleaned the rest of the kitchen. Raj then started whistling “It’s A Hard Knock Life” from Annie. Stuart and Howard then joined in. Then they started singing the song together. Bernadette came into the kitchen, heard them singing, and immediately left the room.