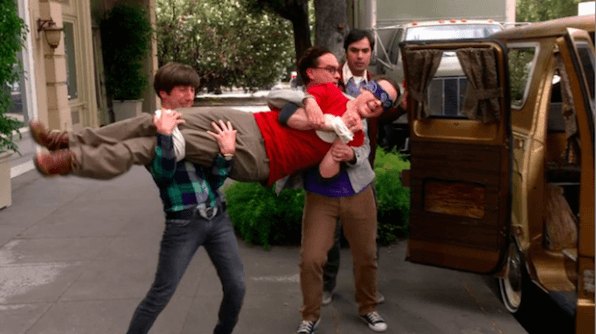 More relationship issues continue on this episode of “The Big Bang Theory,” Howard and Raj came to kidnap Leonard for his bachelor party. They said they were taking him to a surprise location for the weekend. Sheldon then found out Howard borrowed a van from a scientist that Sheldon was obsessed with. Howard said they were going to Mexico and staying in the scientist’s beach house.

Amy came to Penny’s apartment and brought cookies shaped like male genitals. She asked Penny how married life was and she said it was good but she wanted her and Leonard to live together. Amy said she might pierce her ears now that she and Sheldon have broken up. Penny offered to pierce Amy’s ears at home. After she did it, Amy said she was pleased with the results.

On the way to Mexico one of the tires blew out on the van. Bernadette mentioned that Amy hadn’t yet changed her relationship status on social media. Bernadette asked Penny if she had done so and she said she hadn’t because her family didn’t know she and Leonard got married. Amy said she hadn’t yet told her mom she and Sheldon broke up. Penny then said she was calling her parents to tell them she got married. When she told her dad he said he was happy for her and he understood maybe telling them that was hard for Penny. Her dad then said he accidentally backed over Penny’s pet pig and killed him.

Amy then called her mother and told her she and Sheldon broke up. Penny grabbed the phone and told Amy’s mom about the breakup and that Amy brought her penis shaped cookies.

Howard tried to fix the tire and Raj stepped in to help. Leonard and Sheldon tried to help too. They determined they needed to find something to use as a lever, because the tires were stuck in the mud. Eventually Leonard got hold of a lever and they went to work on the tire. They set a tortilla chip on fire to try and unearth the tire from the ground. Sheldon gathered rust and aluminum to use to fix the problem with the tire. Howard accidentally set the van on fire.

When they got back early, Penny asked Leonard and Sheldon what happened to them. Sheldon said they blew up a van and Leonard said he had spent the night in Mexico with Sheldon. Penny decided that topped her dad killing her pet pig.