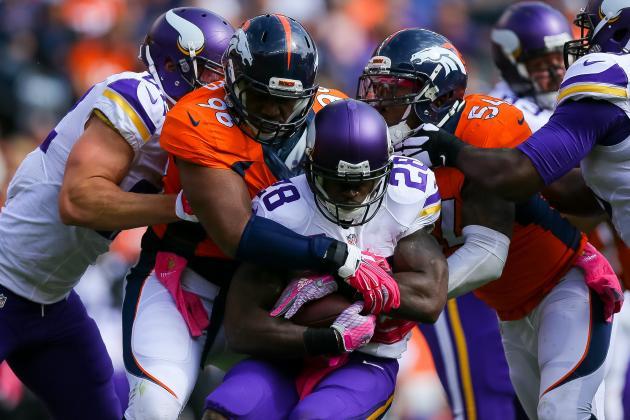 Teddy Bridgewater got no help from his offensive line who got their quarterback roughed up to the tune of seven sacks against the Orange Crush. Peyton Manning benefited from his defense once again as they also ripped the ball from the Vikings on the last drive to secure the three point win.

Peyton is consistent but not great anymore. If he will accept that and just manage the game, his defense could carry him to one last Super Bowl.

TJ Ward got the sack and strip that sealed the game for Denver.

My boy Todd Gurley ran wild in this game that wrecked Arizona’s perfect record. After his disappointing debut last week, Gurley went off for 136 yards in the second half alone.

Arizona’s three turnovers hurt them enough to give the Rams an ugly win over a better team. The Cards have one of the toughest schedules in the NFL, but luckily they play the Niners twice in division.

Fantasy Carnage: Larry Fitzgerald came back to Earth in this one, getting fantasy owners just seven points in standard leagues.

Carolina rolled to 4-0 behind Cam Newton, who is not a stat monster, just a winner. With little help from Jonathan Stewart, Cam is shouldering the offense and helping the Panthers grind out wins.

A win’s a win, but the Bucs are not exactly elite so we won’t crown Carolina Super Bowl champs just yet. Tampa’s kicker had a rough day, much like many other kickers around the NFL who struggled in week four.

I’m guessing the Niners still regret not taking Aaron Rodgers back in the day. Kaepernick looked like the answer a couple years ago, but now looks a mess. He had a QBR of 20.1 in this loss that puts San Francisco at 1-3, and I have no idea how they won their opener.

The bright spot for the 49ers was the defense who played Rodgers pretty well overall. The Packers QB looked half way human in this game whereas he looked untouchable in the first three weeks.

The Pack moves to 4-0 and let’s not forget they are doing this minus their best receiver in Jordy Nelson.

Fantasy Carnage: If you had Randall Cobb, you likely fell in your fantasy standings.

Josh McCown had his best game ever to no avail. His Browns found a way to lose it for him as they jumped offsides to give the Chargers a second chance FG that put them ahead.

The Browns get close but can’t quite get the wins each week. They did incorporate Duke Johnson more this week and should get more production from the former Hurricane the rest of the way.

Rivers should get more offensive help next week when Antonio Gates returns from his suspension.

Fantasy Carnage: Philip Rivers lit up the fantasy board in what turned out to be a much lower scoring week than week three’s insane fantasy numbers.

One of the best games of week four as this one went into overtime. Brandon Weeden tied the game late with a big touchdown throw only to see the Saints drive down the field with seconds left to try a FG to win it.

Lucky for the Boys, kickers were cursed all over the NFL this week and New Orleans missed the kick and we went to overtime. Brees didn’t leave the game in the hands of any neurotic kicker in the extra period as he hit the explosive CJ Spiller on a wheel route that hit paydirt, ending the game in sudden death TD style.

The Cowboys lost another playmaker in Lance Dunbar who tore his knee up and is out for the rest of 2015. Brees came back strong after it looked like his shoulder issue may make him ineffective for a stretch of games.

Brandon Weeden has done his job as a backup, but his team has still lost in both his starts. If Dez Bryant was still in play, the Cowboys would not be 0-2 the past couple games. Ifs!

Fantasy Carnage: Brees had a nice day if you went with him on DraftKings or standard leagues.

This game got Joe Philbin fired…or was the last straw anyway. The Phins looked like a team that did not care to compete and now old Joe has been relieved of his duties and replaced by a tight ends coach that looks like a personal trainer / bouncer.

The Jets’ Chris Ivory had his best game ever with 166 yards on 29 carries and embarrassed the unmotivated Ndamukong Suh and the rest of Miami’s defenders.

17 penalties were too much to overcome for Buffalo and Tyrod Taylor. Rex Ryan likes a team that fights or so he says, but I bet he’d like to have all those penalty yards back.

Tyrod has been great in sections of games this year and fell off in others. He is not a five year starter even though he does have years under his backup belt. He should get more consistent as the year moves forward unless he goes Kaepernick on us.

21 is not a bad point total, but if your kicker is the only freaking scorer then you have an offensive issue. KC will be mediocre at best with Alex Smith I’m afraid. He had a ton of yards (386) but zero touchdowns.

Andy Dalton may fall off any game now. But just looking at the first four games he has been lights out. The guy has the highest yards per attempt average in the NFL and his team is dominant at home, 15-2 over the last 117 contests. The Bengals move to 4-0.

Fantasy Carnage: Jeremy Hill got back in the good graces of fantasy football fans with a big game.

Chicago got a surprise start from Jay Cutler, coming back early from that hammy. It wasn’t like having Montana walk out of the tunnel, but better than the alternative in Jimmy Clausen.

Chicago needed a last minute kick from Robbie Gould to get the win over upstart Oakland, but win they did.

The Raiders are a good team, but need to get better obviously. Amari Cooper had two turnovers that helped the Bears out. Let’s not forget that Chicago was competitive with Green Bay in week one for much of the game.

The Jags might want to search the soccer word or craigslist for a new kicker. Theirs missed two that would have given them a win over Luck-less Indy. The Jags got no scores on their last eight drives, a recipe for sucking.

Matt Hasselbeck made his first start since the Bronze Age, but was good enough to get Indy past the struggling Jaguars.

Look for Allen Hurns if your season long team needs some help at WR. Not a bad play on DFS either when you are running out of cap space.

It took a 90 yard drive for Washington to get over the Eagles, but Kirk Cousins can through in the end. If he can avoid picks he is as good as any mid level QB…I know, nice backhanded compliment at best.

Philadelphia’s struggles continued and had DeMarco Murray complaining about his workload after the game. Philly is a hot mess with just one o-line starter from 2014 remaining. Sam Bradford looked bad again in the first half but rebounded in the second for a decent showing in a close game.

The Eagles defense just cannot get off the field, being gassed for 41 minutes in this game. Hard to stop a last minute drive when you have gotten no rest from your ingenious offense that eats no clock.

Kam Chancellor made the difference in the end as he forced a fumble at the goal line that helped Seattle hold on for the win over Detroit, The Hawks benefited from a missed batting call from the officials.

Things like that happen to winless teams like Detroit, and they will keep happening the rest of a miserable 2015 that will get their coach run off.

Seattle won without Lynch, but found ways to move the ball and outlast their opponent once again. Russell Wilson could win most valuable player if his stats were more inflated. Without him this team goes 8-8 at best the past two years.

As for the noise about Chancellor deserving to get paid more….he is already getting paid plenty for plays like he made on MNF.