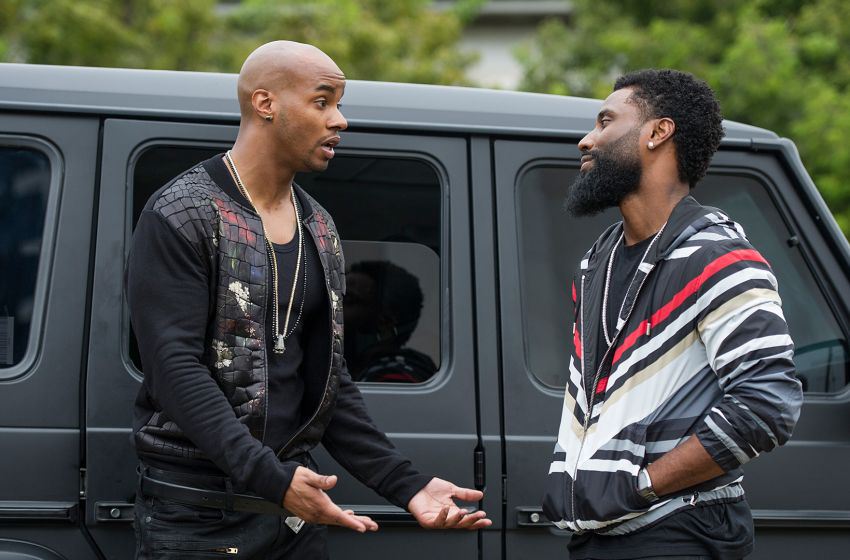 What do ya know….cell phone cams, cocaine, NFLers and naked women make for blackmail on this weeks episode of “Ballers.” Just ask Vernon. Who could have predicted this? Me, that’ who. As I have said before, I could save pro athletes millions through a consulting service. The common sense advice I would hand out would save these idiots millions over their careers. I gotta get that domain on Godaddy.

OK, so Spencer is pissed at Vernon. He is giving the guy the silent treatment just as he should. Vernon thinks his boy Reggie knows what’s best so let him sink with his dead weight anchor of a best friend. Spencer is busy trying to get Victor Cruz to sign on the dotted line. Memo to Spence: Cruz’s heyday is behind him…go chase that diva Odell Beckham Jr. Millions await that kid. Receivers are not hot for long.

Joe finally takes the call from Vernon, who has a BIG PROBLEM. They all agree to meet to put out whatever fire he has now.

Charles Greane can’t shake the hottie that is blowing up his phone. She is determined to get a piece of the former big time lineman. This is all Ricky’s fault of course, but he doesn’t really care. He is too busy lying to his girlfriend about why Alonzo hates him.
At the meeting Spencer tells Vernon to let Reggie fix his problem with the blackmailer since Reg has all the answers. That’s the right approach with that scum. Vernon has to be reminded at every turn just how useless his buddy Reggie really is. This blackmail is kinda legal since the girl selling the photos is simply offering to sell them to Vernon if he wants them first. Good loophole that I need to implement with Falcons camp opening on July 31st. If I can just catch Julio Jones in a compromising position on a boat on Lake Lanier….$50K is plenty for me. I’m not greedy.

Why Ricky keeps trying to make amends with Alonzo is beyond me. No real star receiver would bend over backwards to make a teammate like him. Terrell Owens would have never paid for a teammate’s trip to a strip club. Ricky looks more like a clown every single week. He ended up paying for Alonzo’s whole family to enjoy the stripper buffet.

Joe acts indignant about having to clean up Vernon’s mess, but Spencer reminds him how cool it is to be in the trenches instead of in a cubicle pushing papers. No cocaine, dice games, or hookers back at the office Joe! More Joe is what the show needs. Keep it coming.

Julie Greane can be pretty damn mean. After she drops the picture on Charles, she sees the stripper glitter on him and smells the cotton candy smell of a strip club. Charles tries to act manly as he is about to storm out, but gets clowned by his sharp tongued wife. “Watch out Dunkin Donuts!” Pretty hurtful to the big man, but pretty funny. More Julie!

Ricky actually does something smart for the first time since he has been on film this season. He gets Alonzo out of a cop confrontation, earning his teammate’s friendship. Ricky did something nice and it paid off. In reality he set Alonzo up with the help of his girl’s shady uncle. Nice move anyway. Alonzo appears to be just as big a jerk as Ricky so he gets no sympathy here. This should clear the slate between the two guys and hopefully the show can find a better storyline for Ricky or just show less of him. The latter would be preferable.

Spencer and Joe meet with the lawyer of the lady wanting to shake down Vernon with the elicit photos. This guy is a step below Saul Goodman on the sliding scale of billboard lawyers. The $50K Spencer thinks will make this go away is way off the mark. The guy wants half a million! He is dragging Anderson Financial into the mess since it was their party….no matter how Joe tries to spin it as a corporate event.

The $500K is a big number, but weighed against being suspended by the NFL for conduct detrimental to the The League, it’s not bad. Vernon can try to blame Spencer and Joe for having the party in the first place, but no one made him use his nose as a vacuum or pose with numerous naked ladies. If it were just the women I’d like to see Vernon just say, “Publish the pictures. I’m an NFL baller. This is what we do and if you average folks had the chance to bang hot women on a yacht, you would be doing the same thing.” A little honesty would be refreshing from our athletic heroes.

This episode was a slight improvement from last week’s. The show has to get away from so much Ricky. I don’t like this character and don’t care what he does. If he dies during training camp, great. A weight lifting accident that kills Alonzo would be awesome as well. That will make room for more Joe, Spencer, and Julie.