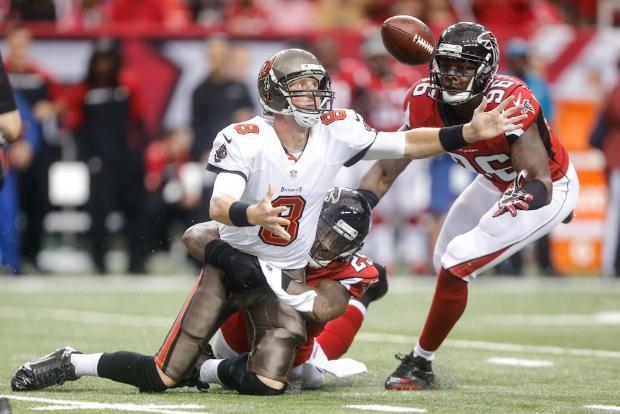 If you’re looking for discount jerseys, now is the time to get your Atlanta Falcons gear on the cheap. You may even get paid to accept a shipment of Matt Ryan jerseys in order to make room for on the shelves for elite QBs.

This one hurt folks. Atlanta drops another division game, making them 0-3 for the year. Their playoff hopes are effectively shot to hell and who’d want to see em in the postseason anyway? It would be a wasted spot.

After winning their first five games, Atlanta is now 1-6 in the past seven weeks. That’s hard to do, even for this franchise.

This game in Tampa was not a thing of beauty. Ryan was maybe a bit better than rookie Jameis Winston in the passing department, but Winston did more in order to get the win. Winston scored on the ground to start the game then came up with a huge run to get a first down on 3rd and 19!

A drive that ended up the difference in the game.

Devonta Freeman was largely ineffective on the ground but did gain over 100 yards in total offense. It just wasn’t enough for the Falcons to get a much-needed win, however.

Matt Ryan did move his team in position to win in the fourth quarter, tossing a touchdown to Nick Williams with ten minutes left in the game. Up to that point though it was kicker Shayne Graham who was responsible for all the Falcons’ scoring. Just 12 points headed into the fourth quarter puts too much pressure on the defense.

That pressure resulted in a Jameis Winston touchdown pass to Mike Evans with just 1:39 left to play in the game. The Bucs led by four, so it was on Matt Ryan and company to answer in a hurry.

That went about like the past few weeks with Ryan throwing the ball away to the defense. Ryan tried to force it to Julio over the middle, and the ball was picked by Tampa’s Lavonte David. Ryan must have figured he’d save Falcons fans some time this week and got the pick out of the way so we all could get back to our Sunday plans.

Ryan had the following to say about the game ending interception. “I shouldn’t have made that throw. … That wasn’t the time to do it.”

Hope that makes you Falcons fans feel better. For Carolina fans like myself, I have to keep moving forward.

The Birds will travel to Charlotte next week for their scheduled beating against said Panthers at 1 pm. Hide the women and children. That game will be rated “M” for “Massacre.”

Lots of records being set by this free fall.