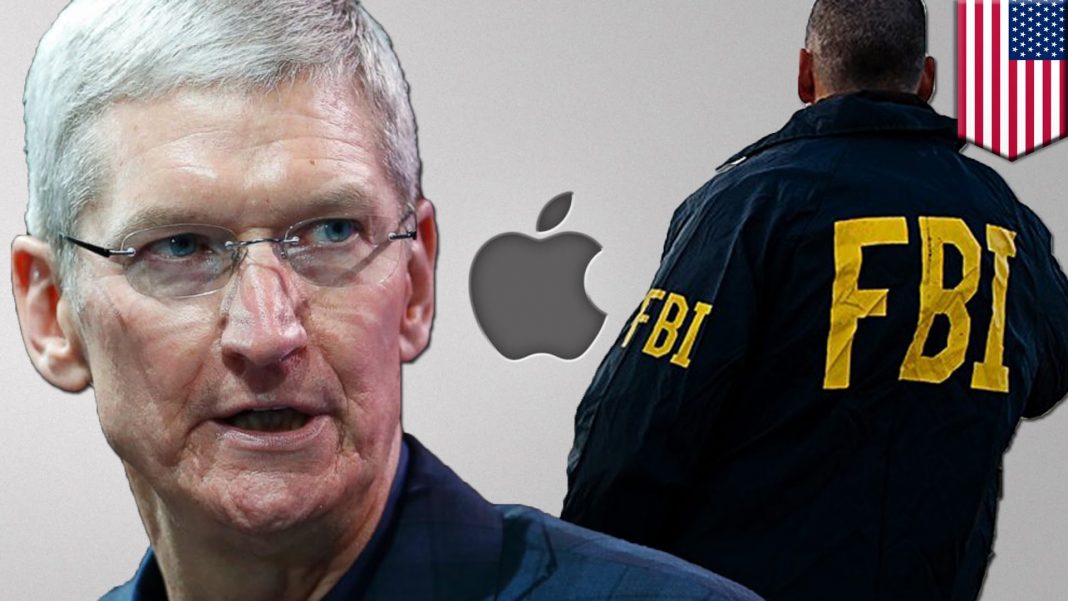 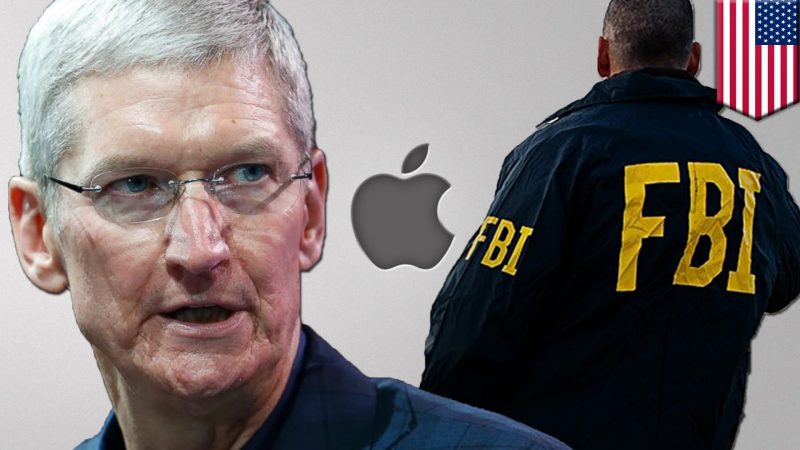 Americans are currently divided on whether or not Apple should give in to the FBI’s demands on hacking the iPhone the San Bernardino killer. It’s a question of national security against nationwide privacy rights. Which is more important? More than 51 percent of Americans, as well as some tech leaders including Bill Gates, agree with the FBI. Apple has no intention of giving in but should it?

Let’s recap. Fourteen people were killed, and twenty-two were wounded when married couple Syed Rizwan Farook and Tashfeen Malik attacked the San Bernardino County Department of Public Health training event and holiday party on December last year. The couple were later killed in a shootout. According to investigations, the couple were apparently radicalized most likely by ISIS but acted as lone wolves. Before they went on their killing spree, they smashed the mobile phones and computers they used to communicate with each other and allegedly other terrorist cells, leaving only Syed’s work-issued iPhone 5C which may contain information on the couple’s online activities.

The FBI managed to get Syed’s last iCloud backup which contained data up to October 2015. The iPhone may yet contain data from October to December, which would likely contain evidence of communication with other terrorists as well as contact information. While Apple has previously cooperated with law enforcement in accessing data from its iPhones, the practice only applies to iPhones running iOS 7 and below. Syed’s iPhone 5C runs on iOS 8 with built-in 256-bit AES (Advanced Encryption Standard) encryption. With Syed being dead, the FBI cannot open the phone without his passcode, and only Apple has the technology to possibly crack the encryption. Brute-force attack via supercomputer is possible if not for the time-delay passcode feature. The problem is, Apple refuses to do so especially since it released the iOS 8 with AES to address its customers’ privacy related concerns. The company also adheres to their policy to never undermine their products’ security features. So the FBI got a court order to get Apple to create a special iOS version to bypass the iPhone’s passcode time-delay and wipeout feature. Apple refuses to follow the court order citing that bypassing the encryption would create a bad precedent wherein its products’ security can be bypassed by others thereby losing their customers’ confidence.

But what if Syed Farook did use his iPhone to communicate with terrorists? Why did he stop backing it up to the iCloud months before he and his wife did their ‘duties’? The phone could likely contain contacts and details about the attack, and Syed may have just missed destroying his iPhone as well. Or he’s just one devoted Apple fan, a great sin in itself to his religion. Sure, destroy millennia old UNESCO-protected sites and artifacts to discourage idolatry, but not an iPhone, an 8GB 5C at that. So if the phone does contain anything, it would be a great help for law enforcement in catching other terrorist cells and lone wolves seeking to kill more innocents. Are overblown privacy concerns worth more innocent lives?

Apple is basically clinging to the fact that their device security is unbreakable even by law enforcement. It’s a much-required feature in today’s privacy-concerned society afraid of getting spied on by their own government and private corporations, after the Snowden revelations. Without it, an iPhone is just another phone. The FBI wants its own version of iOS to crack Syed’s particular iPhone, and Apple contends that once created, the version could leak and find its way to government hands or some enterprising basement blackhat. ‘Life finds a way’ as per Dr. Ian Malcolm. Other theories say that Apple could somehow bypass the security without creating a separate iOS version and that the FBI’s request for its own iOS is what’s fishy. That the government just wants a backdoor to get into millions of iPhones in the US. It’s the demand of a separate iOS version and the possibility of a government backdoor that’s keeping Apple from cooperating.

“Nobody’s talking about a backdoor, so that’s not the right question. This is a specific case where the government is asking for access to information. They’re not asking for some general thing; they’re asking for a particular case… It’s no different than should anybody ever have been able to tell the phone company to get information, should anybody be able to get at bank records…”

But under strictly secure and controlled conditions, the project is possible. Apple sure has the resources to get a site, create a special room and spare a couple of developers. After getting into iPhone in question, Apple does not necessarily need to give their iOS to the FBI if the data is all the government’s interested in. Apple can destroy the source code, destroy all computers involved, mindwipe the developers and immediately code something to counter the rogue iOS version. The phone may contain damning evidence to terrorists. If so, that’s additional brownie points to both Apple and the FBI. If not, better luck next time but additional brownie points to Apple for helping fight terrorism. Extra! Extra! Apple Helps FBI but Keeps and Destroys Special iOS Version!

According to a study by the Pew Research Center, Most Americans are in favor of the FBI over Apple. Any of them could be victims of any other nutjobs the trigger-happy San Bernardino couple has been in contact with. Some civil liberties are a price to pay for additional safety and security, at least during these trying times. That’s what 51 percent of respondents think while 38 percent are in favor of utmost privacy. Even if one percent of those that said “I don’t know” side with the FBI, that’s still a majority. So shouldn’t Apple listen to its users? Or perhaps Pew was better off having only Apple users as respondents for a stronger argument.

“…In general over recent years when it comes to anti-terrorism efforts, we find the public tends to prioritize keeping the country safe over concerns about civil liberties,”

“…Should the government be allowed to order us to create other capabilities for surveillance purposes, such as recording conversations or location tracking? This would set a very dangerous precedent,”

As if the government hasn’t been doing that for years as per Edward Snowden. But the FBI stated that the special iOS version only applies to Syed’s iPhone. Whether it will be surrendered or destroyed isn’t clear. But if the government does order an iOS version they could use to snoop on everyone, then everyone will certainly back Apple.

If Apple is afraid of creating a bad precedent, wouldn’t winning the case also create a scenario in which terrorists and criminals can turn to iDevices to secure their communications? Brothers and sisters to the cause! There’s no need to use Telegram. Apple is our friend. Use iPhones and iPads in planning and communicating because the government can’t unlock it and Apple won’t help them do it!

Now that’s a chilling thought. Perhaps this author’s not alone in thinking it, and most of Pew’s pro-FBI respondents thought of it as well. Perhaps Tim can cook up some compromise where everyone will be happy. 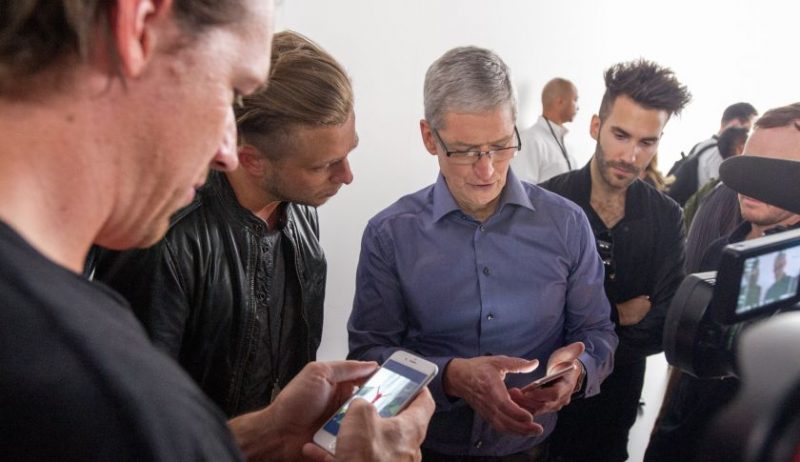 Apple wins another faceoff with FBI in Brooklyn drug case:

A magistrate judge in the U.S. District Court in New York has handed Apple a legal victory in a Brooklyn drug case where federal investigators asked for help getting into a locked iPhone.

Though the ruling isn’t precedent-setting or binding on other courts, it hits on a similar overarching theme of government access to encrypted data, as TheWashington Post reports:

“The two cases involve different versions of iPhone’s operating system and vastly different requests for technical help, but they both turn on whether a law from 1789 known as the All Writs Act can be applied to cases in which the government cannot get at encrypted data stored on suspects’ devices.”

NPR’s Joel Rose previously outlined the premise of this Brooklyn case, which predatedthe legal clash over an iPhone used by one of the San Bernardino shooters:

“Jun Feng pleaded guilty to selling methamphetamine last year. As part of its investigation, the government obtained a search warrant for Feng’s iPhone. But the phone was locked by a passcode, so prosecutors asked a judge for an order compelling Apple to bypass it.”

That order was based on the same law as the San Bernardino court order compelling Apple’s help in unlocking the iPhone used by Syed Rizwan Farook before the Dec. 2 attack, in which he and his wife killed 14 people.

Federal prosecutors say the All Writs Act has been often used to compel companies, including Apple, to help with investigations. But, as Rose reports, something unusual happened in the Brooklyn drug case:

“Federal Magistrate Judge James Orenstein did not sign the order the government wanted. Instead, he went public and asked Apple if the company had any objections. …

“The judge seemed particularly skeptical that the government relied in part on an 18th century law called the All Writs Act.”

The Justice Department says Apple had previously complied with at least 70 All Writs Act orders without objection, and the Brooklyn case was the first in which Apple challenged such an order in court.

“…the relief the government seeks is unavailable because Congress has considered legislation that would achieve the same result but has not adopted it. In addition, applicable case law requires me to consider three factors in deciding whether to issue an order under the [All Writs Act]: the closeness of Apple’s relationship to the underlying criminal conduct and government investigation; the burden the requested order would impose on Apple; and the necessity of imposing such a burden on Apple. As explained below, after reviewing the facts in the record and the parties’ arguments, I conclude that none of those factors justifies imposing on Apple the obligation to assist the government’s investigation against its will. I therefore deny the motion. …

“Ultimately, the question to be answered in this matter, and in others like it across the country, is not whether the government should be able to force Apple to help it unlock a specific device; it is instead whether the All Writs Act resolves that issue and many others like it yet to come. For the reasons set forth above, I conclude that it does not.”

The Justice Department says it plans to appeal the case:

“We are disappointed in the Magistrate’s ruling and plan to ask the District Judge to review the matter in the coming days. As our prior court filings make clear, Apple expressly agreed to assist the government in accessing the data on this iPhone — as it had many times before in similar circumstances — and only changed course when the government’s application for assistance was made public by the court. This phone may contain evidence that will assist us in an active criminal investigation and we will continue to use the judicial system in our attempt to obtain it.”

FBI Director James Comey and Apple’s General Counsel Bruce Sewell are both slated to testify at a House Judiciary Committee hearing on encryption on Tuesday.

U.S. attorneys are due to respond to Apple’s filing in the U.S. District Court for the Central District of California by March 10, and a hearing has been scheduled there for March 22.