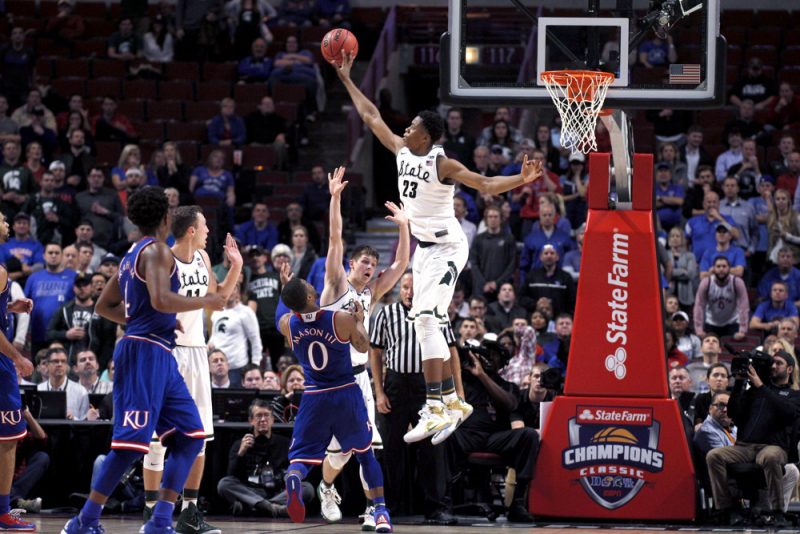 The Kansas Jayhawks and the Michigan State Spartans are the respective No. 1 and No. 2 teams with the February 29th college basketball AP Poll. Both teams went undefeated last week while formerly top-ranked Villanova suffered a defeat at the hands of the Xavier Musketeers. With two coaches that are right for the job, I think that the AP Poll has it right when it comes to sorting out the favorites just ahead of the month of March.

Kansas has Bill Self at the helm, a proven coach when it comes to playoff success. There are a lot of coaches out there, including Jay Wright for the Villanova Wildcats, that do well in the regular season but usually don’t follow it up in the playoffs. However, Self is not like that as his Jayhawks were the runner-ups back in 2012. Previously, he took his squad to the NCAA championship, winning it all with Kansas in 2008.

Tom Izzo, the head coach of the Michigan State Spartans, also has a history of winning in March. Izzo took an underdog team to the Final Four just last season, a team that returns many players to this year’s squad. It has been a long time since Izzo last won it all, something he did in 2000. However, that’s not to say that there haven’t been deep runs. Besides last year, Izzo’s Spartans were in the Final Four most recently in 1999 and 2000. Correction: Michigan State Spartans also were in the Final Four in 2001, 2005, 2009 (runner-up), 2010 & 2015. Thanks to our readers who were quick to point this out.

There are few other proven coaches that have elite teams this season. North Carolina with Roy Williams is in the mix, but the Tar Heels have lost some favor in recent weeks, drifting out to No. 8 in the AP Poll. The defending champion Duke Blue Devils, under Mike Krzyzewski, continue to have a disappointing season as they are now ranked 17th following a poor week that saw them lose at Pitt. Rick Pitino’s Louisville Cardinals were looking like a promising team, but they are out of the playoffs already following the scandal that rocked their campus a couple of weeks back. Furthermore, John Calipari’s Kentucky Wildcats, the pre-season favorites, are nowhere near championship form as they have drifted way out to No. 22 following a loss at Vanderbilt this weekend.

The March Madness NCAA basketball tournament doesn’t start until March 15th. It will conclude on Monday, April 4th with the championship game. Ahead of the playoffs, there’s plenty of regular season action still. In fact Kansas will play a key game on Monday night at Texas, a team ranked 23rd in the polls.

Following the wrap up of the regular season, there’s only a million conference playoff games to be played. With the hundreds of team that will contest the conference playdowns and then the big dance – all in straight elimination format – this March promises to be just as dramatic for college basketball fans as any March previously.