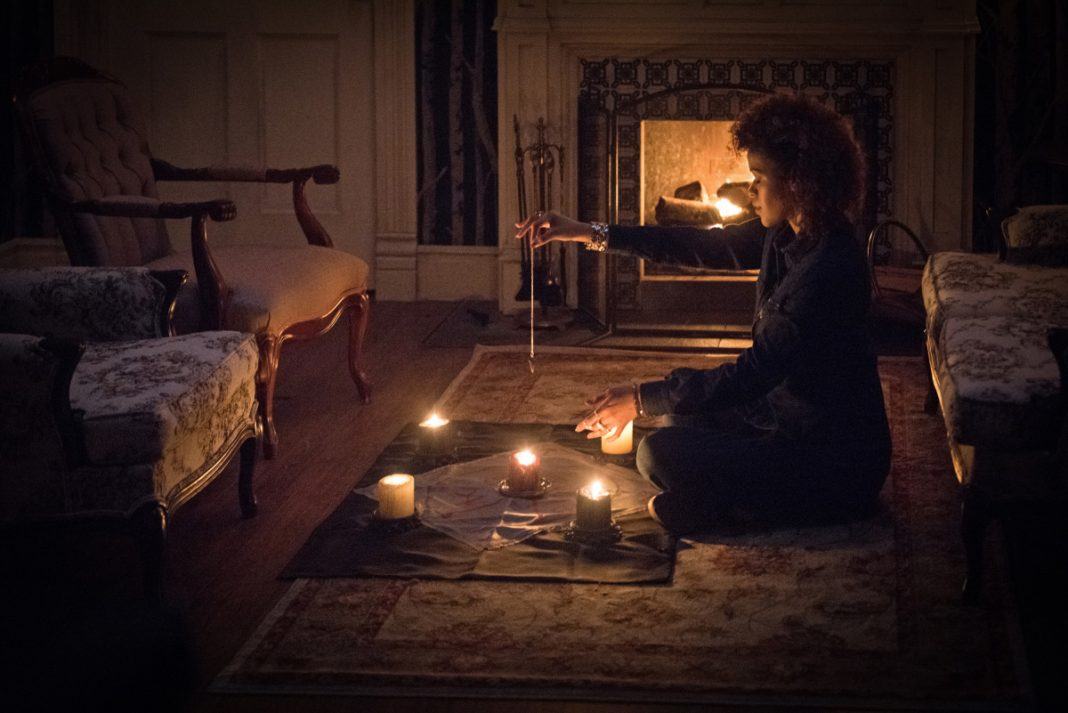 I recently got the chance to chat with Alvina August, who played Tasha Banes in the Supernatural episode Twigs and Twine and Tasha Banes. Her character was definitely a highlight of the episode – we get the chance to meet the mom of the “witch twins,” a witch, but yet a hunter herself. The episode also gave us one of my favorite lines so far this season – “Her mom’s on a hunting trip, and hasn’t been home for a while …” I nice throwback to one of the oft-quoted lines from early Supernatural.

What did you enjoy most about playing Tasha Banes in Supernatural?

What I enjoyed most about playing Tasha Banes is the fact that I got to play a multi-dimensional character; loving mother, witch-hunter, nurturer & murderous twig zombie. I’ve played the latter character-type before although the extent of my wickedness went only so far as turning kids into mice and figurative backstabbing. The more challenging and rewarding part about the experience was getting to play a mum. I don’t have kids myself, but I was raised by a tribe of women from grandmother to aunts and finally my own, so there was no shortage of maternal references to draw from. Moreover, I connected immediately with Kara Royster & Kendrick Sampson and got to know them over the week we spent shooting which helped make our on-camera relationship more believable.

In the scenes with the glowing scrying stone – how did you keep the stone so still, or was it just a stick that they added a stone with CGI?

The stone dangled from the chain the entire time we shot. I picked an imaginary spot about a foot in front of my hand and traced it up, moving only my eyes as though it was changing direction. CGI effects were added later. The SPN production teams (stunts, make-up/hair, effects) are all so brilliant at what they do which takes the pressure off the actor.

Tell us about the location where your scenes were filmed. What a beautiful home!

For the first few days of shooting, we shot at this beautiful 3-storey home out in Pitt Meadows, BC. The home belongs to a Marilyn Monroe impersonator. It felt very removed from everything else and the narrow halls, tiny rooms and hollow squeaking wooden floors made it even more eerie which worked for the story I think.

What was the funniest thing to occur during filming?

Everything. LOL! Trying to play dead in a room with Jared & Jensen is one of the hardest things I’ve ever had to do on camera. Jared was constantly making puns out of every prop on set; like what ‘thyme’ is it or can I ‘axe’ you a question? I really don’t know how anyone gets anything done over there.

What information do you have with regard to Tasha and Asia Fox? Any backstory that you can share?

All I can say is that Tasha and Asa had a one-night stand, she got pregnant and raised the twins on her own. There are no details as to their encounter, but perhaps we will know more later as we continue to follow Max and Alicia now the ‘orphaned’ witch twins.

Was the basement as bad as it looked?

When I saw the basement, which was created in-studio, I got goosebumps!!! It was cold. But mostly, I was blown away by the attention to detail of the design department. It was so realistically unsettling. Thankfully, it didn’t smell like rotting corpses, more like potpourri.

Was the way that Jensen Ackles (Dean) holding his wine glass scripted, or was that something Jensen did himself?

Not at all! That was completely off the cuff. Dean is more of a beer & hard liquor guy, so naturally his caveman grip of that wine glass had us all in stitches and Rich. loved it enough to run with it. It broke the tension of the scene quite nicely, so I’m glad it made the final cut.

What did you bring to the character of Tasha Banes that is unique to you?

I’ve always possessed a certain wisdom beyond my years. My mum, a twin herself ironically, was a single parent like Tasha and raised me to be independent. She taught me never to be defined by just one thing. Tasha Banes is both a loving mother and a driven career woman (if witch-hunting was a legitimate profession). She is fierce, imperfect and self-aware. She wears her heart on her sleeve, is not easily intimidated and believes there is good in all things and people. I try and live my life that way and perhaps that showed in my audition and landed me the role. Who knows?

Tell us about your character/role on The Other Kingdom. What did you enjoy most about playing a somewhat “evil” character?

My acting TV debut came in the form of a conniving fairy on a kid’s show; a transformation made possible thanks to a prosthetic headpiece with rotating robotic twigs, some dramatic make-up and a whole bunch of special effects. Villains are fun to play. There is more freedom to explore. What I enjoyed most about playing Versitude was that I found the humour in her delusion. Despite what other people perceived her to be and her often questionable methods, I admired her ambition. Random fact: My nickname on set was ‘Twigs’ which makes it twice now that I’ve played a stick person with magical powers on TV.

I will be appearing in the new Syfy pilot “The Machine” based on the 2013 movie of the same name. The series will explore a world being transformed by the emergence of artificial intelligence. As for other news, my music single ‘Separate Ways’ will be available worldwide May 12th followed by a performance live at the Opera House in Toronto on May 17th.