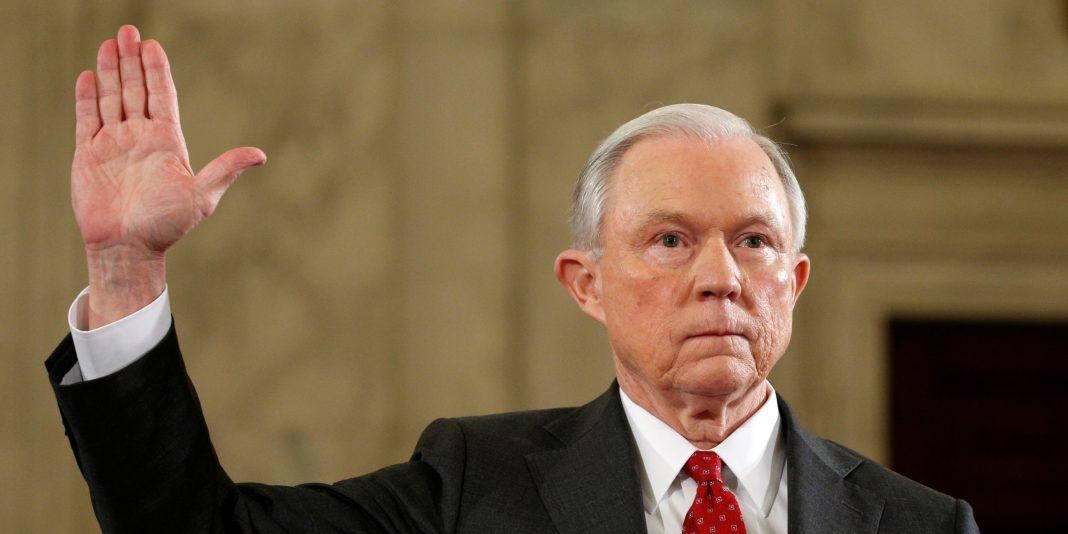 President Donald Trump certainly knows how to spin up his wheels splattering everyone around him with dirt while keeping himself relatively clean, and Attorney General appears to be his latest victim.

Trump originally had Vice President Pence and his spokespeople give credit to the recommendation of Sessions which immediately raised eyebrows all over Washington DC.

Attorney General Jeff Sessions recused himself from investigations related to the presidential campaign, yet he played a central role in the sudden firing of FBI Director James Comey, leaving many wondering if he violated that pledge.

“Attorney General Sessions should not have had any involvement in this decision at all,” said Sen. Al Franken, D-Minn. “He recused himself. And yet he inserted himself in this firing.”

Sessions’s recusal came back in March, after it was revealed that he’d misled senators, including Franken, about his contacts with Russian Ambassador to the U.S. Sergey Kislyak. Sessions insisted those contacts were innocent. But with the FBI investigating Russian meddling in last year’s election and possible ties to the Trump campaign, Sessions promised to keep his distance.

“I have now decided to recuse myself from any existing or future investigations of any matter relating in any way to the campaigns for president of the United States,” Sessions said.

Legal experts say that recusal was appropriate, given Justice Department rules against taking part in an investigation involving close associates.

“Because he was an early supporter of President Trump, obviously he was nominated to the office he holds by President Trump, he has the kind of personal and political relationship that the recusal regulation does pertain to,” said John Q. Barrett, a law professor at St. John’s University.

But the question of whether Sessions broke his promise to stay out of certain investigations is complicated and political. And the answer partly depends on what you see as the real motive behind the director’s firing.

Some questions and answers about Sessions’ recusal:

WHAT WAS SESSIONS’ PROMISE?

The shorthand version is that Sessions vowed to step aside from investigations into Russian interference in the 2016 election after it was revealed he twice spoke with the Russian ambassador during the campaign and failed to say so when pressed by Congress during his confirmation hearing. But what he actually said was broader: “I have decided to recuse myself from any existing or future investigations of any matters related in any way to the campaigns for president of the United States.” That could be interpreted to mean he pledged to stay out of affairs related to the Russia probe, but also to other campaign-related investigations, including into Hillary Clinton‘s use of a private email server.

DID HE BREAK THAT PLEDGE?

Sessions recommended Comey’s firing, writing in a letter that “a fresh start is needed at the leadership of the FBI.” And President Donald Trump said he based the firing on Comey’s very public handling of the bureau’s investigation into Clinton’s emails.

In that context, the move can be seen as purely a personnel decision based on Comey’s conduct, and Sessions should have been involved given his job as attorney general, said Susan Hennessey, a fellow at the Brookings Institution and managing editor of the Lawfare blog.

But if you believe the dismissal was an effort to stifle the FBI’s investigation into Trump campaign ties to Russian meddling in the 2016 election, as some lawmakers have alleged, “that reasoning is much harder to defend,” she said.

It can also be argued that Sessions should have steered clear of Comey’s firing because his recusal applied to investigations of “campaigns,” which would include the Clinton email probe, said Jane Chong, Lawfare’s deputy managing editor and national security and law associate at the Hoover Institution.

SHOULDN’T HE HAVE JUST STAYED OUT OF IT?

Staying out of it could have been seen as suspicious, giving critics ammunition to argue Sessions did so because there was a connection between the firing and the Russia probe, Chong said.

“Choosing not to be involved would actually be its own kind of statement,” she said. “That was clearly something he could have done, but I think optically speaking, there would still be a problem.”

“Sessions was in a hard place here,” she said.

IS THERE A PROBLEM WITH HIS DEPUTY BEING LINKED TO THE FIRING?

Sessions’ recusal means Deputy Attorney General Rod Rosenstein is overseeing the Justice Department’s Russia investigation. Rosenstein also wrote a memo blasting Comey’s handling of the email probe. Trump has said that scathing report factored into his decision to fire the director, though the president also said he would have done it regardless of the Justice Department’s recommendation.

Rosenstein “had a level of credibility regarding his political independence,” Hennessey said. “His involvement in Comey’s firing doesn’t just undermine; it eviscerates the belief in his impartiality or credibility on this.”

Whether Rosenstein is impartial doesn’t matter as much as whether the public believes the investigation is credible so that people have faith in the outcome, she said. Her suggestion: Appoint a special prosecutor.

DOES ANY OF IT MATTER?

Not really. There’s no legal penalty for Sessions if he should have stayed out of the firing, though Congress could grill him over it or seek an inspector general investigation, Hennessey said. And it certainly won’t change Comey’s ouster.

“It’s still an important question to understanding how the decision was made,” she said.

ISN’T SOME OF THIS FAMILIAR?

Kind of. The last high-profile special counsel to be named was in 2003 when the Bush Justice Department turned to Patrick Fitzgerald, then the top federal prosecutor in Chicago, to investigate who leaked the identity of Valerie Plame, a covert CIA officer. That appointment was made by Comey, who at the time was deputy attorney general. Comey took the extra step of giving Fitzgerald complete discretion to conduct the investigation, bolstering the special counsel’s independence.