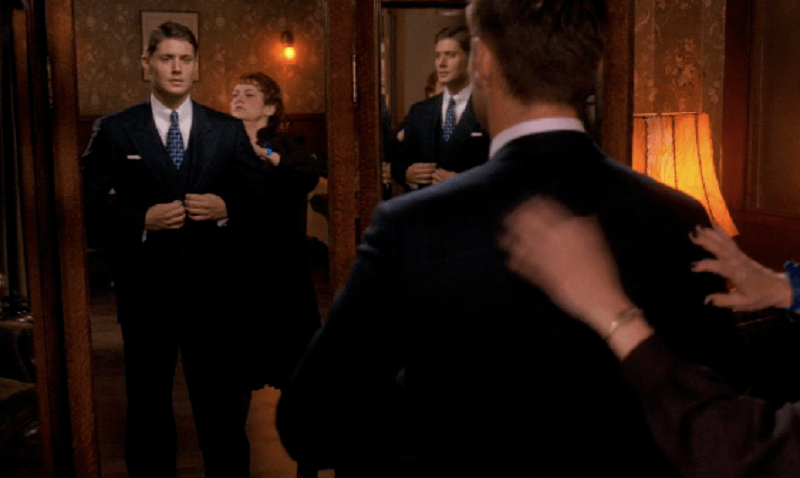 It’s always the one you don’t expect … in Twigs & Twine & Tasha Banes, Supernatural fans meet “the demon borrower witch” – we never really get her name, but Linda Darlow plays the heck out of her character. Fans may also remember Linda as Ezra Moore in Time After Time … and if you’re a Dean fan, you more than likely envied Linda … well, you’ll see why …

You have been on many, many productions; what was the most memorable character you’ve ever played?

There are actually 2 characters that I could never forget!  One was “Ma”(a Hillbilly Cannibal) in a Comedy Horror short, “The Auburn Hills Breakdown” and the other was “Roxanne”(an aging cougar) — a recurring role in a series called “Alienated.”  They were both a few years back, so I don’t know if they’re available anymore, but I know I’ll never forget them!

Tell us about playing the Demon Borrower Witch on Twigs & Twine and Tasha Banes.

Yet another “out there” character role that I loved playing!  When I auditioned for the role the director, Richard Speight, Jr., asked me to make her really nice on the second read and I started to laugh because I don’t usually do “nice” roles, so she became this maniacal crazy person.  I thought I had really blown that audition, but I booked it and when we shot it, Richard had me do the character both ways – grumpy & nice.  That was both challenging and lots of fun!  It was also the first time in my acting career that I got to kill someone and then get killed.

Also, that limp I used was actually real – I was not fully recovered from a broken ankle!  I was concerned about being back at work so soon, but everyone working on the show made certain I was safe and totally taken care of.  I think the limp worked for the character too!

You were also in Supernatural back in 2012, as Ezra Moore on Time After Time, where you played a hunter back in 1944. Which episode did you enjoy most, and why?

Wow!  Yes, that seems like a long time ago now! I only have one memory of the 2012 episode which I will talk about in the next question.   I have to say I enjoyed “Twigs & Twine…” more.  Not because it’s more recent, but because it was a crazier character which is always fun for me. 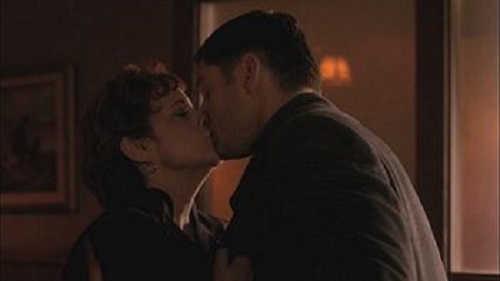 What was the funniest thing to happen whilst on set?

If you mean on the set of “Supernatural,” all I can remember from the “Time After Time” episode is that I had to kiss Jensen Ackles (Dean)!  I had to plant a big one right on his lips!  I know all the fans would be jealous that I got to do that but for me, not knowing him at all, I was sooo uncomfortable and nervous!  I mean, he’s sooo cute!  As it turned out, he was very gracious and kind about it, and I survived.  Ironically, I got to kiss him in that episode, and he got to kill me in this last one!  Payback!

If you mean on any set I’ve worked on, I think trying to do a sexy lap dance (in heels) in an episode of “Alienated” and trying not to fall over was one of the funniest things I’ve ever had to do.  I actually took a lap dance lesson before that shoot!

You were recently on iZombie as well; can you tell us about that experience?

The character I played on “iZombie” was fairly mild (compared to other character roles).  She was a cookie-baking, tea-making, nosey, busy-body who helped the leads track down a killer.  It was what I would call a “utility role” – just to move the story along.  But we found a couple of moments to make it more interesting.  Great director, cast & crew to work with!

What is your favorite type of character to play?

That’s easy!  I am a “character actress,” so the further the stretch away from who I really am, the better.  As I mentioned earlier, I don’t do many “nice” characters.  I’m more comfortable doing strong, tough, even nasty roles!  Not that I am nasty, but I have the tough look and I get to be nasty, evil, crazy and they pay me for it!  It’s fun for me.  There are so many shows now that are in the sci-fi, comic book, fantasy, “out there” genres – there’s still a place for a nasty old lady to participate.  Not all actresses are comfortable with those roles – I love them!

I’m sorry to say that I don’t at the moment.  There are a couple of Independent Features that are still in post-production, but I have no idea when they may be released.  One is called “Real Fiction, ”.” and the other is called “Resid.”  Anyone can check out what I’ve been up to on IMDB.