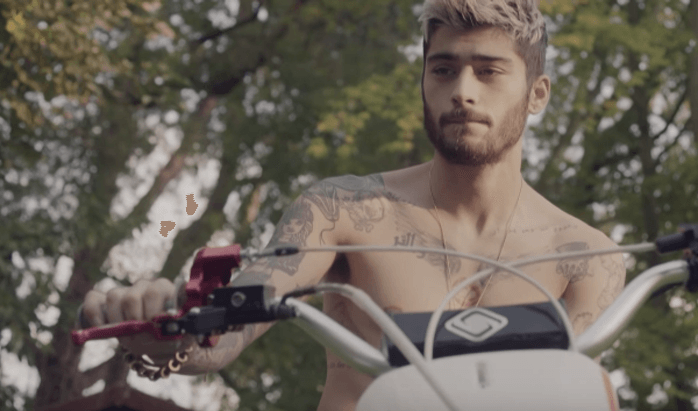 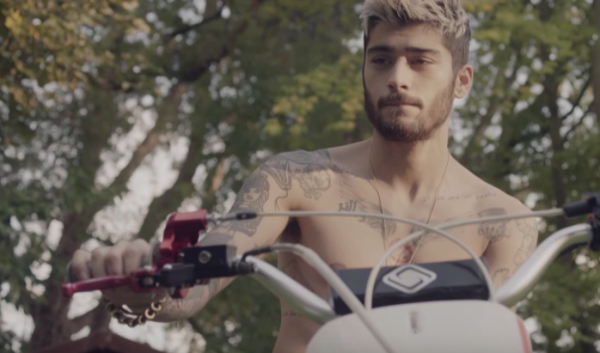 Considering One Direction put out their album Made in the A.M. just a few days ago, it’s only natural for ex-band member Zayn Malik to want to steal some of their thunder. On Tuesday, The Fader magazine released a short film that promoted Zayn’s interview and spread with the publication. This marks Zayn’s first major magazine interview since quitting One Direction.

In the short film, Zayn is seen riding a motorcycle shirtless through the forest. This is fitting for the young musician, considering he revealed that he recorded his solo album in a secluded house in the middle of a forest. 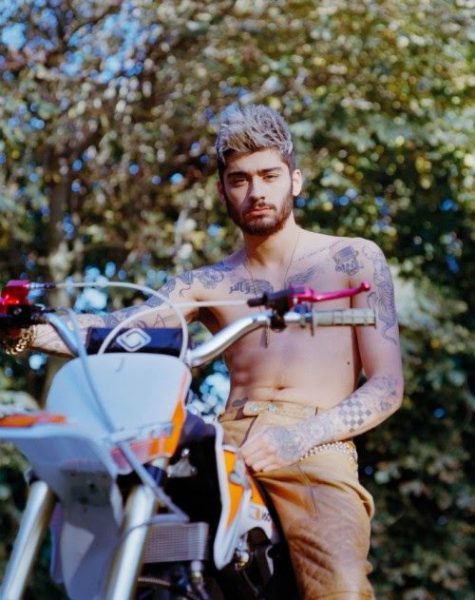 In addition, the film features a snippet of Zayn’s upcoming single, “Befour.” Unsurprisingly, the title has sparked some controversy and conspiracy theories amongst One Direction’s massive fandom.

In the feature, Zayn goes on to drop some hints about what people can expect from him as a solo artist. He says, “life experiences have just been the influences for the album and just stuff that I’ve been through especially in the last five years, being in the band and everything.”

Zayn also explains that people haven’t been able to really understand who he is as an artist. He says, “I don’t feel like people really know what I’m going to give them.” Going on to say, “Because for five – not even for five years, for ten years, this album has been in my brain and it’s just been there, sat with me, needing to be out.”

He also refers to ‘Larry Stylinson’ which was a fanmade name for band members Harry Styles and Louis Tomlinson that Directioners have fantasized as having a secret romance. Zayn said that this caused problems for the two as they were afraid to show any kind of affection fearing that it would only trigger more scrutiny.

‘It’s not funny, and it still continues to be quite hard for them,’ he added, showing a bit of sympathy for his former co-stars in an interview that otherwise was altogether more negative.

‘They won’t naturally go put their arm around each other because they’re conscious of this thing that’s going on, which is not even true. They won’t do that.’

So while his former band winds down and heads on their two hiatus, Zayn is gearing up and ready to win back some fans. 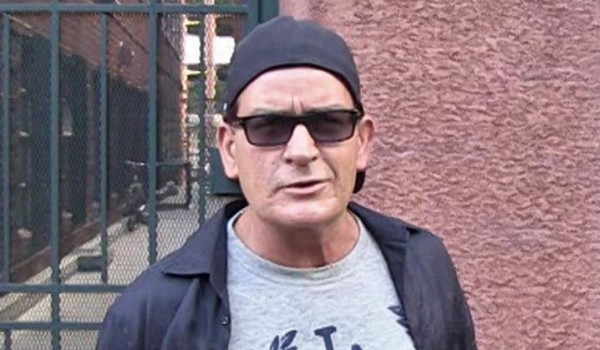 The latest shocker to rock Hollywood comes from Charlie Sheen. The actor penned an open letter where he reveals he is HIV positive.

The 50-year-old explains, “Roughly four years ago, I suddenly found myself in the throws of a seismic and debilitating three-day cluster-migraine-like headache. I was emergently hospitalized with what I believed to be a brain tumor or perhaps some unknown pathology. I was partially correct. Following a battery of endless tests, that included a hideous spinal tap, it was sadly and shockingly revealed to me that I was, in fact, positive for HIV.”

The troubled star continues, stating, “The news was a ‘mule kick’ to my soul. Those impossible words I absorbed and then tried to convince myself, that I was stuck, suspended, or even stranded inside some kind of alternate reality or nightmare, were to the absolute contrary. I was awake. It was true…realty.”

Charlie goes on to reveal that he underwent intensive treatment and was able to rid of most his symptoms. However, the shame and anger he developed transformed into a self-proclaimed “suicide run,” where he abused both substances and alcohol. He went on to say, “…every blood test returned levels revealing a state of remission. Even though I might have been trying to kill myself, one thing was radically evident; the disease was not.”

In the letter, Charlie also claims that numerous of his sexual partners have used his condition as blackmail, even though he says he was upfront about his condition to them. He then boldly sates, “News Flash: This ends today. I’m claiming back my freedom…”

At the end of the open letter, the former Two and a Half Men star says he is done with his “partying days” and looks forward to a more philanthropic future.

This is the full letter Sheen wrote:

An open letter from Charlie Sheen:

Roughly four years ago, I suddenly found myself in the throws of a seismic and debilitating three-day cluster-migraine-like headache. I was emergently hospitalized with what I believed to be a brain tumor or perhaps some unknown pathology. I was partially correct. Following a battery of endless tests, that included a hideous spinal tap, it was sadly and shockingly revealed to me that I was, in fact, positive for HIV.

The news was a “mule kick” to my soul. Those impossible words I absorbed and then tried to convince myself, that I was stuck, suspended, or even stranded inside some kind of alternate reality or nightmare, were to the absolute contrary. I was awake. It was true… reality.

Under the brilliant and perfect care of Dr. Robert Huizenga as well as “the” leading infectious disease expert in the known universe, I began a rigorous and intensive treatment program. Not missing a beat, a med dose, or one shred of guidance, quickly my viral loads became undetectable. Like every other challenge in my life, again, I was victorious and kicking this disease’s ass. I wish my story had ended there. Unfortunately, for my family and myself, it had only just begun.

The personal disbelief, karmic confusion, shame and anger lead to a temporary yet abysmal descent into profound substance abuse and fathomless drinking. It was a suicide run. Problem was, I’d forgotten that I’m too tough for such a cowardly departure. Yet, despite this loathsome and horrific odyssey, I was vigilant with my anti-viral program.

My medical team could only shake their heads as each and every blood test returned levels revealing a state of remission. Even though I might have been trying to kill myself, one thing was radically evident; the disease was not.

In and around this perplexing and difficult time, I dazedly chose (or hired) the companionship of unsavory and insipid types. Regardless of their salt-less reputations, I always lead with condoms and honesty when it came to my condition. Sadly, my truth soon became their treason, as a deluge of blackmail and extortion took center stage in this circus of deceit.

To date, I have paid out countless millions to these desperate charlatans.

Locked in a vacuum of fear, I chose to allow their threats and skulduggery to vastly deplete future assets from my children, while my “secret” sat entombed in their hives of folly (or so I thought).

News Flash: This ends today. I’m claiming back my freedom. The scales of justice will swiftly and righteously re-balance themselves.

In conclusion, I accept this condition not as a curse or scourge, but rather as an opportunity and a challenge. An opportunity to help others. A challenge to better myself.

Every day, of every month, of every year, countless individuals go to work, man their stations, fulfill their professional obligations with a host of disabilities. Diseases, imperfections, hurdles, detours. These maladies range from lupus to cancer, from paralysis to blindness, from diabetes to obesity. “Treated,” HIV is no different.

My partying days are behind me. My philanthropic days are ahead of me.

Ernest Hemingway once wrote, “Courage is grace under pressure.”

I’ve served my time under pressure; I now embrace the courage, and the grace.

Four years ago, Charlie Sheen came to see me with an upper viral infection followed by joint aches, swallowing complaints and then progressive severe headaches. During this infection, his HIV tests “seroconverted” (acutely changed) from negative to positive. He was immediately placed on four antiretroviral drugs and his HIV viral blood levels thankfully dropped to undetectable. He has tolerated his antiretroviral cocktail and by faithfully complying with the daily pills, his viral HIV load has remained consistently undetectable.

The urgent dilemma that both Charlie and I recognize is that there are 1.2 million other Americans currently living with this diagnosis. Shockingly, up to 20 percent of these individuals are unaware of their HIV status and sadly 60 percent are not adequately being treated. This leads to 50,000 new diagnoses and 18,000 HIV deaths yearly in this country.

I anticipate Charlie can save many more lives coming forward with his revelation than I could ever have aspired to as a doctor. With Charlie remaining dedicated to his treatment regimen, I expect the HIV will only minimally — if at all — affect his predicted life expectancy.