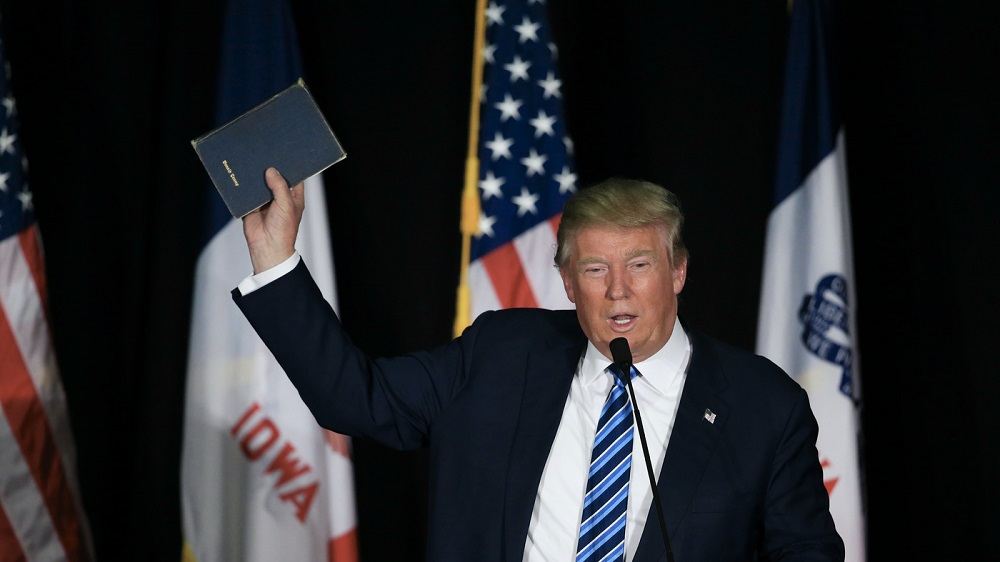 When Donald Trump began his campaign, he didn’t mention religion or the Bible, but once he realized that this was something his base wanted, he suddenly was the best Bible reader in the world.

He even stated that he knew more about the Bible than anyone, and no one loved the Bible more than he did. Evangelicals seem to forgive a lot (as long as you’re not gay, want to choose what to do with your body or a multitude of other things Jesus didn’t preach), but even Donald Trump has pushed them to their limits with forgiveness.

As he’s helped the Republican party blow itself up, will evangelicals ditch the party for a more solid one that fits more with their beliefs?

Evangelicals, deeply divided over Donald Trump, are wrestling with what the tumultuous 2016 election will mean for their future.

His candidacy has put a harsh spotlight on the fractures among Christian conservatives, most prominently the rift between old guard religious right leaders who backed the GOP nominee as an ally on abortion, and a comparatively younger generation who considered his personal conduct and rhetoric morally abhorrent.

“This has been a kind of smack in the face, forcing us to ask ourselves, ‘What have we become?'” said Carolyn Custis James, an evangelical activist and author who writes about gender roles in the church.

The outcome of this self-examination is as important for evangelicals as it is for the Republican Party. Christian conservatives have been among the most reliable members of the GOP coalition. Recent PRRI polls found nearly seven in 10 evangelicals backed Trump. Yet, those numbers are lower than the 79 percent who voted for 2012 Republican nominee Mitt Romney, a Mormon who had struggled to win over conservative Protestants for theological and other reasons.

Any election post-mortem will, of course, be shaped by who wins the White House.

A Hillary Clinton victory could draw energy away from any re-evaluation of the religious right, given her support for abortion rights and gay rights, and the opportunity she will have to shape the U.S. Supreme Court. While many younger evangelicals have fought for a broad range of concerns, including fighting climate change and poverty, they are staunchly opposed to abortion, often more so than their parents.

“I think there could be a resurgence in some way of some kind of Christian right approach to politics,” said John Fea, a historian at Messiah College in Pennsylvania, and author of “Was America Founded as a Christian Nation: A Historical Introduction.” “Many evangelicals, whether ‘Never Trump’ or willing to support Trump, are ultimately shaped by a core set of convictions. They are still going to be – for good or for bad – one-, two- or three-issue voters primarily. I think that persists.”

And if Trump wins? Evangelicals who advocated for him, such as Tony Perkins of the Family Research Council and author and broadcaster James Dobson, would feel vindicated before their critics if Trump fulfills his promise to appoint conservative high court justices. “Very early on he was concerned about the marginalization of Christianity,” said the Rev. Robert Jeffress, pastor of the megachurch First Baptist Dallas, who advocated for Trump. Jeffress said the candidate reached out to him on the issue a year and a half ago. “He believes that Christians are continuing to lose their religious freedom in America,” Jeffress said.

Yet, even if Trump proves loyal to Christian conservatives, questions would remain about whether his evangelical supporters traded their integrity for influence. The thrice-married Trump has been accused of sexual misconduct by several women, bragged about grabbing women’s genitals, mocked a disabled reporter, maligned Mexican immigrants and insulted the parents of a fallen American Muslim soldier.

“If they can support even Donald Trump, and even after we learn more and more about him, then this has actually been a charade all along designed to raise money or to grasp for power or to build institutions or personal platforms,” said Collin Hansen, a longtime Republican and editorial director of the Gospel Coalition, an interdenominational evangelical ministry. He said he hoped leaders who opposed Trump had retained enough credibility to provide “something to build on.”

Those leaders include Russell Moore, head of the public policy arm of the Southern Baptist Convention; Peter Wehner, a fellow at the Ethics and Public Policy Center who served three Republican presidents; editors for the influential evangelical magazines Christianity Today and WORLD; and many prominent evangelical women. Deborah Fikes, a former representative to the U.N. for the World Evangelical Alliance, endorsed Hillary Clinton.

Christian conservatives had split over politics long before this presidential race. Many younger Christians had rejected the strategies of the Moral Majority and Christian Coalition as harmful to the church. A study by Brad Fulton of Indiana University found a significant decrease in recent years in conservative Protestant churches distributing voter guides – a staple of religious right mobilizing – or engaging in political activity in their congregations.

Still, that shift to a more diverse church with a new generation of leaders is only just beginning. Many of the older religious right figures who backed Trump continue to have an impact on their organizations and Christian radio, even though their influence has dwindled.

“There will be a segment of white evangelicals after Trump who say never again, but there will still be a significant and unfortunate vocal portion of white evangelicalism that doesn’t change much,” said Jemar Tisby, director of the African American Leadership Initiative at Reformed Theological Seminary in Jackson, Mississippi, and co-founder of the Reformed African American Network.

Moore was an early and frequent critic of Trump, to the point where the candidate hit back on Twitter, calling Moore “a nasty guy with no heart!” Moore puts evangelical Trump supporters in two categories: those who promoted Trump as the morally good choice and others who acknowledged Trump’s moral flaws but feared for religious conservatives under a Clinton administration.

David Green, a Pentecostal Christian and founder of the Hobby Lobby arts and crafts chain, had rejected Trump during the GOP primaries as unqualified and lacking humility, but then endorsed him in September, saying the nominee was the only chance to protect religious liberty. Green had successfully sued over the Obamacare requirement that employers provide coverage for birth control, winning religious exemptions for for-profit businesses two years ago in a ruling by the Supreme Court.

Moore, of the Southern Baptist Convention, said, “I understand those who are lining up with Trump with great reservations. I’m not persuaded by it. But that’s different than the people who have been telling us that we need this kind of strongman to save Christianity. “

That distinction may be lost on younger evangelicals disillusioned by this election. Moore said discussion is already under way about religion and political conservatism, and building new institutions to prevent younger Christians from disengaging from political life. “That conversation will happen with new intensity after the election,” Moore said.

But Molly Worthen, a professor at the University of North Carolina-Chapel Hill who studies conservative Christianity, cautioned against expecting major change from one election year.

“The inclination of many conservative activists will be dwelling on Trump’s idiosyncrasies as a candidate,” Worthen said. “His message of taking this country back and saving it for Christians or for white people will still resonate with a huge number of people.”