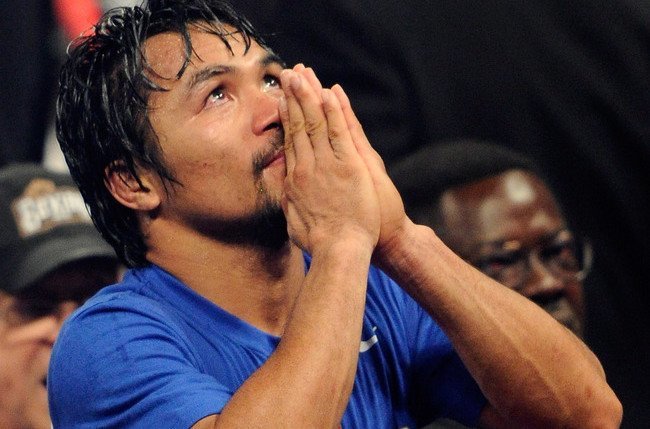 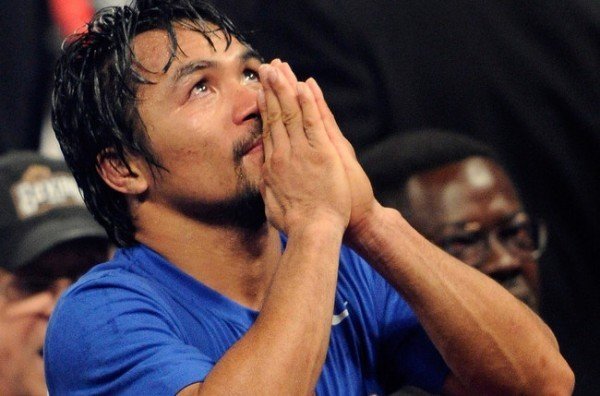 Hopefully, the sports world never has to sit through another insomnia-curing “Super Fight” between Manny Pacquiao and Floyd Mayweather again. If a rematch does ever happen, it won’t be so easy to root for Pacquiao this go round instead of usual bad guy Money May.

Pacquiao has done some damage to that good guy image in the eyes of many with his recent comments on gay relationships. The 37-year-old boxer made some pretty ignorant statements, even for an athlete, during a TV interview when he said people in same-sex relationships are “worse than animals.”

Nike dropped the boxer soon after the comments were made public.

Pacquiao did apologize in the following statement after the controversy grew but still stood behind what he said. “I’m sorry for hurting people by comparing homosexuals to animals. Please forgive me for those I’ve hurt. I still stand on my belief that I’m against same sex marriage because of what the Bible says, but I’m not condemning LGBT. I love you all with the love of the Lord. God Bless you all and I’m praying for you.”

Here’s a media tip Manny. You won’t have to bother with a half-hearted apology if you don’t offer up your opinion on the gay community, especially with Bible verses calling for them to be put to death for who they choose to love.

Pacquiao’s Instagram account seemed to back up his initial comments as a Bible quote appeared, reading: “If a man has sexual relations with a man as one does with a woman, both of them have done what is detestable. They are to be put to death; their blood will be on their own heads.”

No one really cares what you have to say about the subject anyway….unless you say something really dumb, which you did. So congrats on creating trouble for your own self by giving folks something to talk about for a few days.

We know Pacquiao is a Christian, who openly talks about his faith. And I fully support him following the teachings of his religion. As long as he’s just offering his opinions and not advocating stoning folks, he’s welcome to say whatever he wants. He just needs to be fully aware of the possible blowback from such comments.

It’s easy to dismiss a boxer’s thoughts on hot button issues. But Pacquiao is a member of his country’s House of Representatives. So his opinions are a bit more relevant than an NFLer, who only plays ball and smokes weed in his downtime, or a NASCAR driver who’s only public service involves picking up his own beer cans at the county owned fishing hole.

It’s always amazing to me when public figures use the Bible as a reference point for their criticism of same-sex relationships. I have no idea why people believe it’s their calling to tell others how they should live. As long as the gay couple down the street isn’t harming you in some way, why would you care what they do?

And it seems the “gay sin” is the go-to card for the self-righteous. There’s plenty of other things that are frowned upon in the Bible, but I guess it’s easier to pick out the rules that you yourself don’t break when judging others.

The Good Book says we shouldn’t lie, nor should we cheat on our spouses, yet how many athletes pound the podium for these ideals?

There are numerous other rules that are laid out in the Bible that no one bothers to obey either. Pork is forbidden, yet is consumed by a ton of Christians on a daily basis.

Personally, I don’t care what most athletes say. Their opinions don’t shape my thoughts. I try to do my own thinking. But many people do get outraged when a public figure makes statements about how others should live. Being compared to animals is certainly enough to warrant outrage, and at the very least leads to some hurt feelings.

Manny Pacquiao’s opinion hasn’t changed just because he was pressured into an apology. Time will tell if he’s smart enough to sidestep questions like this in the future.

Even as he hangs onto the same ignorant notions, he should at the very least keep them to himself. It would save us all the trouble of worrying about what a guy who gets punched in the head for a living thinks about society.

It would also save Pacquiao the embarrassment of having to backtrack on statements that reflect his true feelings.

Work on that plank in thy own eye my man.