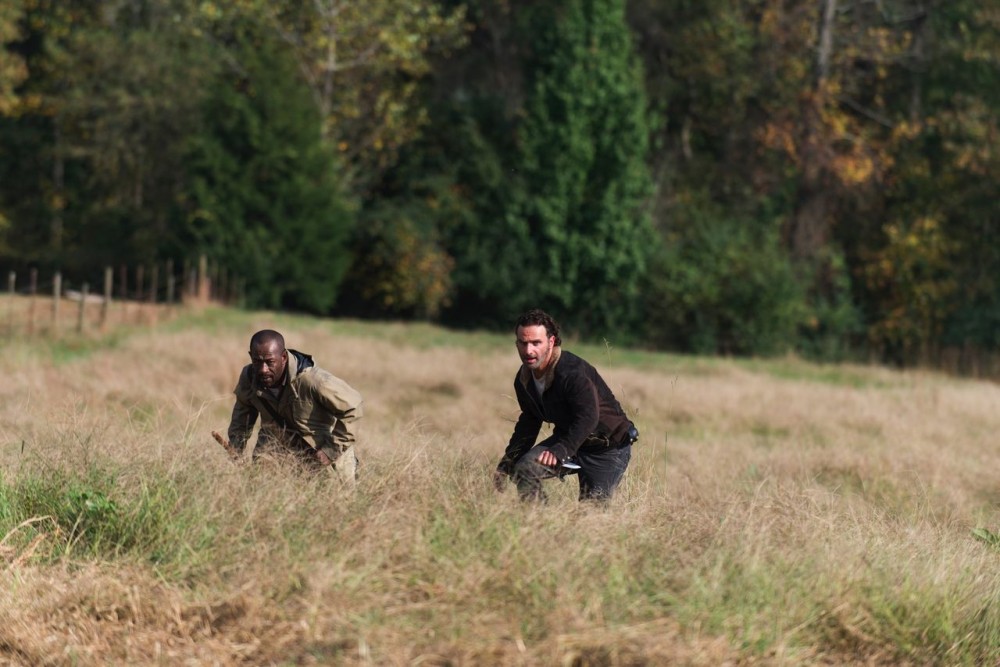 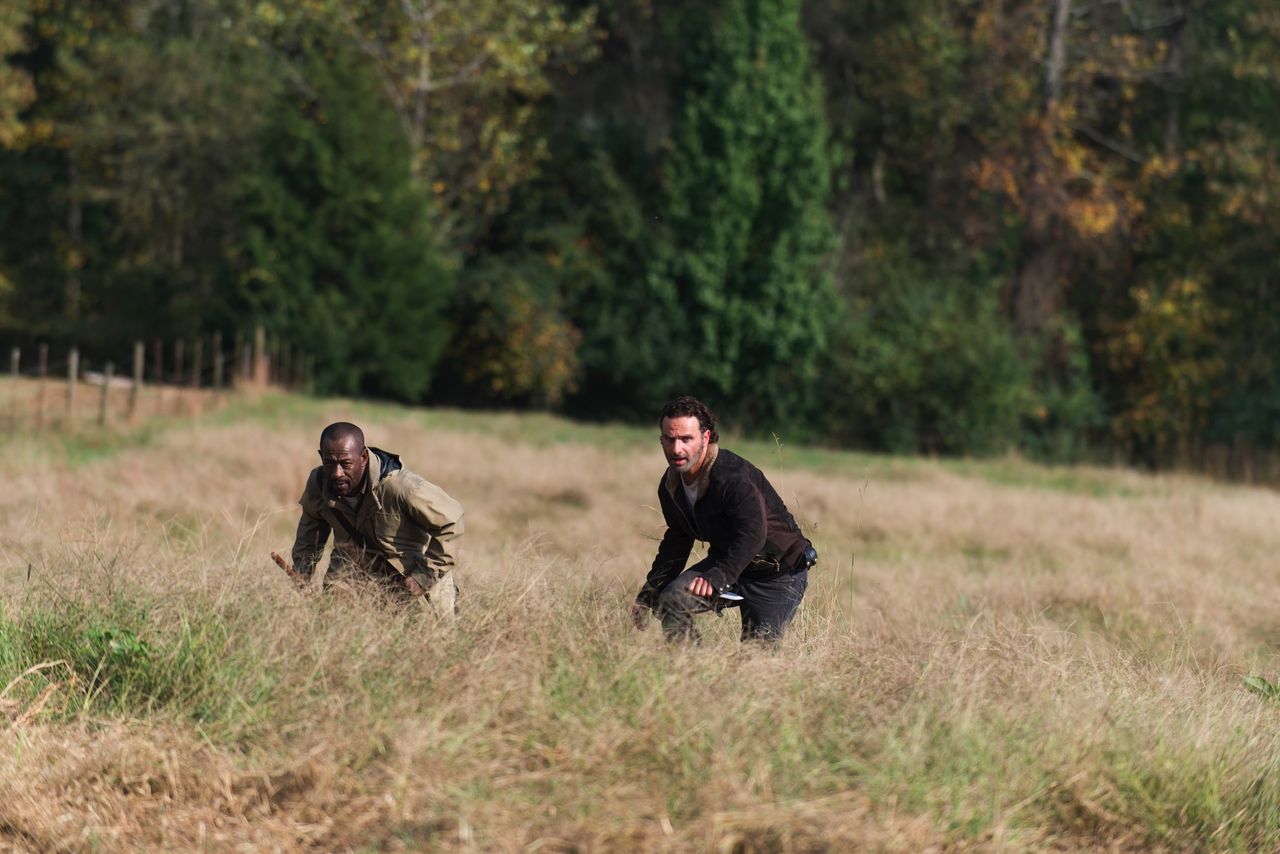 Boy, was there a lot of talk of things coming full circle this week on “The Walking Dead.” Mostly from Morgan. But all that “what comes around, goes around” stuff rang a little bit hollow. More on that in a bit.

First, we had to back up and watch Carol pack her stuff as she prepared to leave Alexandria. Not much new info there. We knew she was bouncing at the end of last episode.

The flashback did provide a Johnny Cash track for us with the “Man in Black” singing about misery and loss. “It’s All Over” played as Carol walked away while Maggie and Glenn enjoyed a shower together.

The shower scene revealed the bruises on Maggie from the kicking she received while held hostage.

And….Daryl is feeling guilty about Dr. Denise, so he’s going lone wolf to exact some revenge.

I can’t get past how dumb it was for Carol and Daryl to leave Alexandria. Their actions caused a domino effect that put others in danger. The ones that went after them and the people left back inside the walls.

I get it. The story had to move forward, and these two characters’ reckless actions made that happen. But Carol is facing the same issue outside the walls as inside. She ends up having to kill within the first 13 miles of travel. So much for ending her murder streak.

Rick is looking way too confident for my liking. Dude is riding high after slaughtering the Saviors and now waking up with Michonne on a daily basis.

But an apple a day will not keep the Saviors away.

Yes, the world is yours, Rick Grimes. You’re just have to defend it everyday for the rest of your life.

Carol did her killing once again with the cowardly act just before unloading on a truckload of Saviors with a hidden Uzi. She also speared one and gut shot the long winded guy who shot her tires out in the first place.

There is one lone survivor that goes after her trail. Foolishly I might add. After what just happened to his buddies, if that lady is headed east, I’m going west.

Morgan and Rick’s road trip is more talk about killing or not killing. The peace proponent tells Rick he didn’t end it with the Saviors. He started something.

Morgan even makes a good argument with Carol’s exile as the perfect example. If Rick had killed her over her prison murders, then Team Grimes would have fallen at the hands of the Terminites, since a dead Carol couldn’t have saved them.

Morgan was getting some traction but then told Rick about the Wolf he let live inside Alexandria. He claimed that the Wolf changed when he saved Denise from the Walker swarm. That made it possible for the doctor to save Carl after he was shot in the eye.

As for Daryl, he was followed by Rosita, Glenn, and Michonne. They catch up to him, and he sends a warning shot at Rosita. Reckless!

Glenn begs Daryl to let it go and come home. We know that’s not gonna happen. Daryl says, “I can’t.” 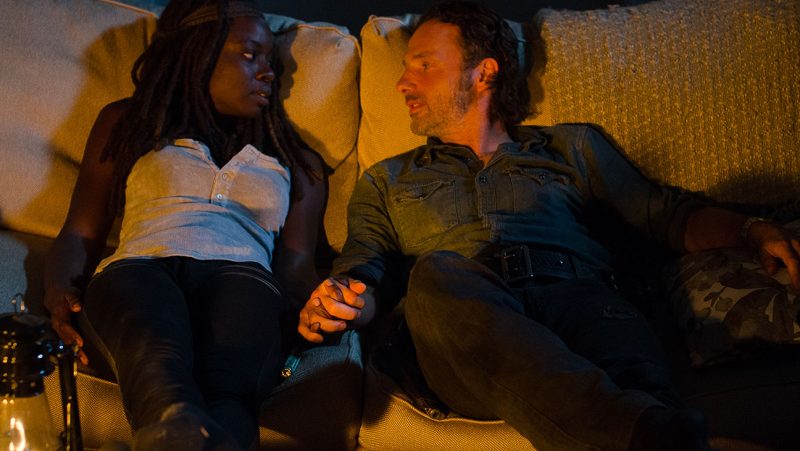 It would have eaten away at him to just give up the search for the crew that killed Denise. Had he killed Dwight when he had the chance in the burnt forest, Denise would still be alive. This is the opposite “circle” effect that Morgan is preaching.

As for the search for Carol, it’s going to be Morgan who keeps looking as he tells Rick to go back home. Carol has put the entire town in danger and has come no closer to avoiding murdering others.

Back in Alexandria, Maggie is getting her hair did. Enid helps her out with a trim just before we see her baby is in trouble. Maggie is in severe pain that sends her to the floor. No doc on hand and someone may be making a trip to the Hilltop to fetch their doctor.

By the way, shouldn’t Team Grimes be collecting on their payment from the Hilltoppers for wrecking the Saviors? Negan was part of the deal, but I think Rick would want to go ahead with the food promised by Gregory.

The show closed with a bad scene. Maybe the last scene for Daryl Dixon ever. Oh, it’s true. Our boy got shot by Dwight as Daryl and Rosita tried to rescue Glenn and Michonne, who had been tied up by Dwight’s click.

We hear Dwight say, “You’ll be alright,” after Daryl’s blood is splattered on the camera. If he’s not alright, then it’s his own fault. He should have listened to Glenn and Michonne. Now his stubbornness has gotten him shot and may lead to the deaths of three of his companions.

Way to go Daryl. You just poured gas all over season six. And Negan is out there somewhere holding a damn match.

This entire second half season has looked like an old school wrestling TV taping. The high profile wrestlers (Team Grimes) have been kicking the shit out of the jabronies (Saviors) for the entire show.

Now the last two episodes look like the easy matches have come to an end. And Hulk Hogan is going to be facing a real challenger, like Andre, The Giant.

No more Mulkey Brothers to beat on. There’s gonna be chairs to the head, foreign objects pulled from the trunks, and some outside interference.

Hulk Hogan is in a real fight now. And he’s about to lose his position as champion of the world.