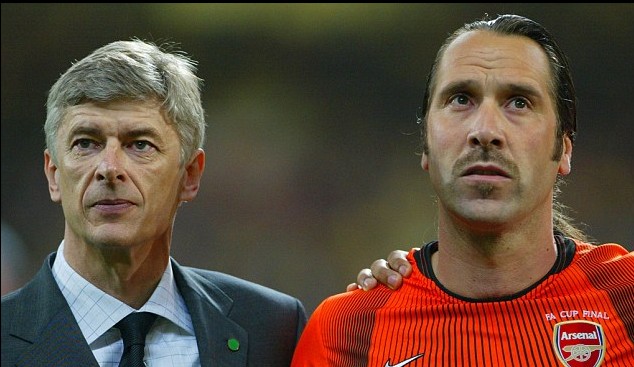 Former Arsenal goalkeeper, David Seaman, has come to the aid of his former boss. Seaman believes that Arsene Wenger is still the right man for the job at the Emirates despite a decade-long title drought.

The legendary goalkeeper believes that sacking the 66-year-old Frenchman will be a risky move, and the club can suffer a similar crisis as their rivals Manchester United. According to Seaman, the departure of Sir Alex Ferguson from the helm at Old Trafford destabilized the club and the Gunners need not make the same mistake.

“I’m so fed up of all this negative stuff about Arsenal. A change at the top? Not for me. I’m a massive fan of Arsene,” Seaman was quoted as saying by The Mirror.

The North Londoners were at the top of the Premier League table at Christmas, but they are now trailing the league leaders Leicester City by 11 points. The reigning FA Cup champions were knocked out of the domestic cup competition, and they were also eliminated from the Champions League in the round of 16.

Many Arsenal faithful are not satisfied with Arsene Wenger, but Seaman still backs the Frenchman to succeed at the club.

“But, for me, he’s been brilliant. I worked with him for about seven or eight years, and he was fantastic. I would stick by Arsene. I’ve always said that, and I haven’t reason to change my mind.

“Look at Manchester United. Look at what has happened to them. They lost a great manager in Alex Ferguson. He retired. It’s always greener on the other side.

“It’s frustrating for Arsenal fans. I can understand that. I get frustrated at times. But we shouldn’t be negative about it. We should try to stay positive.”

Mathematically, the Gunners can still finish at the top of the table, but it seems very unlikely with only seven matches to go. They are much nearer to participate in the fight for the Champions League spot than the Premier League title. Fifth-placed West Ham are only five points behind them, and if somehow Arsenal finish outside the top four, Arsene Wenger can surely find himself out of the club this summer.