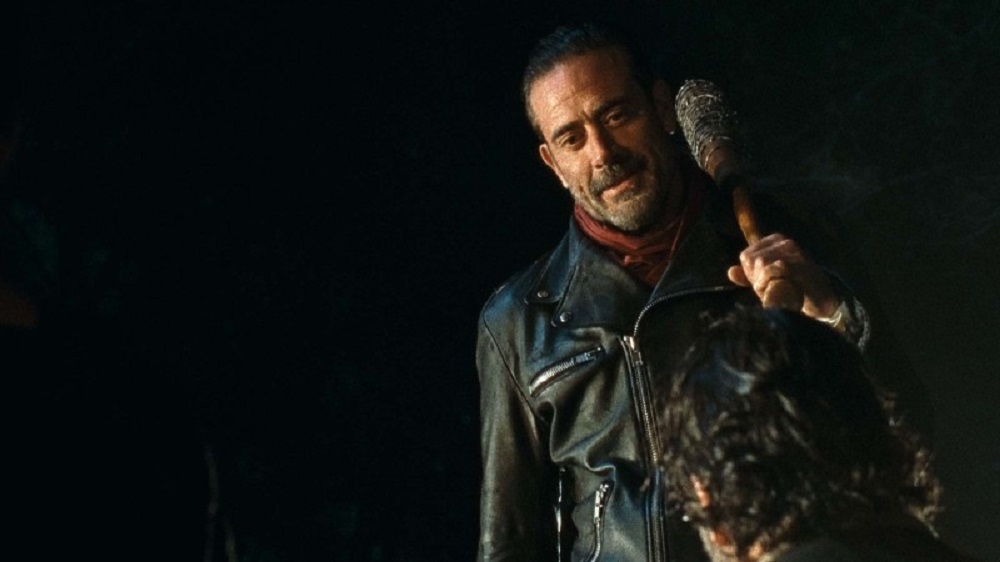 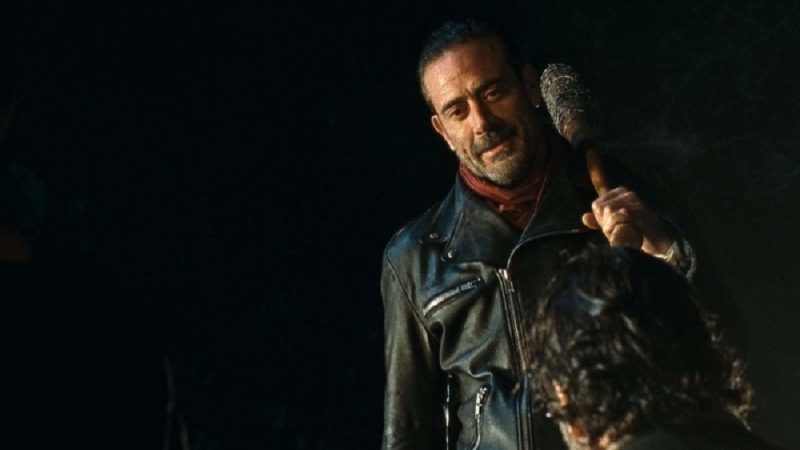 Daryl Dixon’s got to be dead right? Or maybe Eugene who was sent in as a sacrificial lamb to the Saviors? Could it be Glenn who experienced his last day on Earth? Well, we have heard from so many sources now that it’s Glenn who meets his maker at the end of Negan’s bat. These are the same sources who told us back in Season 1 that Shane was going to be eating lead from Carl, so we have more faith in them. People doubted us then, so I’m sure fans will try to find a reason to doubt us know, but just like back then, we stand firm by our belief that Glenn has finally used up all of his luck. Even for a show like “The Walking Dead,” suspending disbelief only works for so long. The finale definitely had us doing that when Rick Grimes and company take off on foot only to be suddenly surrounded by eery whistles and Negan’s army.

We’re going to have to wait until the fall premiere of season seven of “The Walking Dead” to find out if they want to prove us wrong. The cliffhanger from the season six finale was one of the best teases I’ve seen in quite a while. I’m sure millions were pissed at not knowing which member of Team Grimes bit the dust, but those same people will be counting the days until the return of TWD next season.

A lot went on in the first part of episode 16, so try to keep up. ***Warning, one spoiler at the end of this post.

The issue that drove the finale was Maggie and her baby being in danger, so the group had to get her to a doctor at the Hilltop Colony. The group that took her kept growing to an unsafe number, with very few top notch fighters left to defend Alexandria.

Gabriel was in charge of the defenses if that tells you anything. Although the man has earned Rick’s trust at this point.

Spencer mentions a deal with the Saviors if they come. Rick tells him to inform the Saviors “to wait for me.” This was still the Rick with some swagger, long before he was forced to kneel.

Pride coming before the fall.

Where’s Carol? She’s hurt, but Morgan finds her and wants to take her home on his newly found horse. She isn’t having it and is down right suicidal at this point.

I get it; she’s tired of killing. However, there is no other option if she intends to keep living herself. Whether she’s inside Alexandria or roaming around like a free range chicken, survival depends on the need to defend one’s self.

The RV group taking Maggie to the Hilltoppers ran into a road block that consisted of the Saviors about to execute a victim who had bucked their system. Rick and company decided to back away and take another route.

Making a stand at the first road block would have been better than what happened as they met bigger packs of Saviors blocking their way at each detour.

Bo Darville would’ve been a good man to have around in this situation to run some interference.

The third roadblock is a chained group of Walkers that is meant to scare Rick’s crew but not stop them completely, even though they were shot at. At this stop it becomes apparent that Daryl and Michonne have been captured by the Saviors.

A rocket launcher would have come in handy with the roadblocks. Especially the fourth one that consisted of 30 plus soldiers.

Carol’s illogical stance continued as she got jumped by the survivor from her Uzi attack. She was wanting the man to whack her, but he was going to make her suffer first, shooting her in the arm then the leg.

Morgan ended up saving her by taking a life in order to save a truly precious life. He did give the man a chance to walk away.

An interesting twist came with some warriors on horseback showing up to help with Carol. These two guys were dressed in plastic armor and looked to be pretty formidable fighters.

Team Grimes had to think they were stuck in a horror movie as they kept getting trapped at every turn. The fifth roadblock consisted of a huge stack of timber. And the Saviors tossed their hostage off the bridge with a rope around the poor bastard’s neck.

I’ve longed for the death of Eugene for a while. It felt like I was finally going to see his demise when he had the idea to take the RV and let the rest of the crew take Maggie on foot. He was saying his goodbyes and even gave Rick his blueprint for mass bullet manufacturing. The show runners wanted to make it overwhelming obvious Gene was gonna get killed.

I was thrilled, even if his death meant an advantage for the Saviors.

Well, Gene’s brilliant plan crashed and burned and the entire group was rounded up by Negan’s men whose numbers were spotlighted by their loud, creepy whistling.

Carl’s announcement a few minutes prior about not letting anyone else die like Denise seems foolhardy now as he and his group are forced to kneel. The boy is powerless. Rick is powerless….and a nervous wreck, knowing they could all die right then and there.

The party wouldn’t be complete without Daryl, Michonne, and Glenn as they are let out of their lock box. Then the star of the show arrived.

Oh, and Negan too.

This guy has a flare for the dramatic. He knows how to engage an audience. Team Grimes is pretty damn terrified without him detailing what’s about to happen to them in gruesome fashion.

All his theatrics serve to make this event not only memorable for the Alexandrians but Negan’s own men as well. Just in case, they get any ideas about opposing him at some future point. Jeffrey Dean Morgan was definitely a great choice for this role. Jon Hamm was also reportedly up for it, and I think either one would have been perfect casting as it’s just a meaty role of evil and charisma.

“Pissing your pants yet?” is his first question to the group. He tells Rick he is gonna pay for killing so many of his men as Negan holds Lucille on his shoulder.

Negan’s demands are simple and show why they haven’t killed Rick and his people already. He’s the tax man. Dead folks can’t be taxed. Pretty damn easy to understand. More people to take shit from makes Negan’s life that much easier.

Before any of you fans blame Rick’s plan to attack the Saviors’ bunker in the first place, let’s be clear. Negan and his men always make an example out of someone in a new group. The upcoming murder with the sweet spot of Lucille was going to happen no matter if the Alexandrians struck first or not. 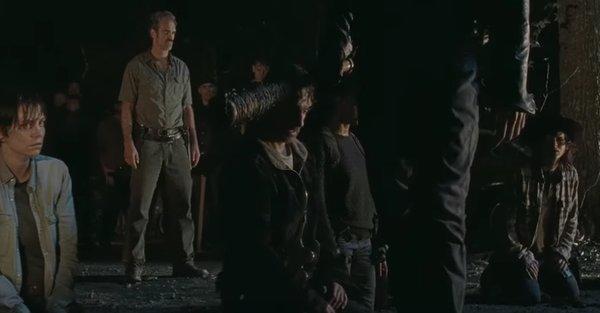 The scene leading up to Negan making his example was filled with darkness and the sound of crickets in the woods. Rick has no answers and is trembling as he knows he cannot stop what’s about to happen.

Maggie is in rough shape. Glenn has already lashed out as she was threatened.

Daryl didn’t have anything to say as he was already in bad shape from being shot.

Carl referred to as a future serial killer by Negan, is filled with rage. Yet, can’t do a thing. It is over for one of their family members.

Once Negan is done with his entertaining monologue, he goes old school “eenie meenie miney mo” to pick Lucille’s victim.

Whoever received that first blow, “took it like a champ,” according to the post-apocalyptic homerun king. Negan proceeded to pound in the skull of his poor victim as the audience got a first person view of the murder with blood dripping down the camera and going black. 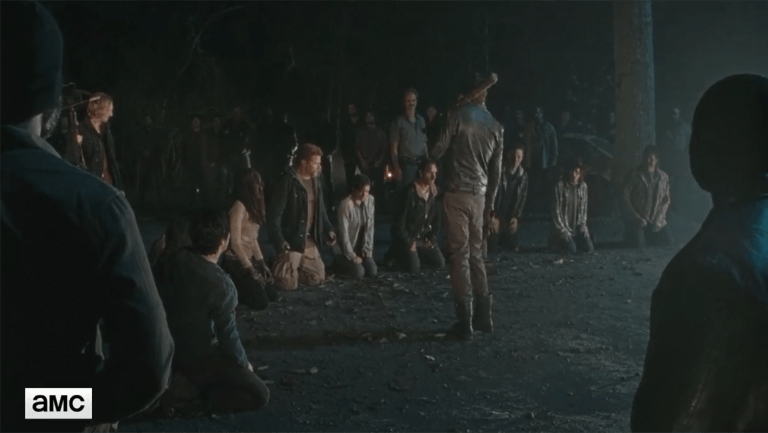 That ended season six. Negan is the undisputed champion of this new world. Rick and company just thought they were in control.

They’ve faced brutal people before, never the sheer numbers that Negan has on hand. It’s not going to be easy to dethrone this dictator.

While I would like to know who got their brains turned to mush, I like the cliffhanger approach. I’m assuming it’s a major character that is gone forever, so the opening episode of season seven may be the most watched TWD episode yet.

We’ll have to wait and see…

BTW, my odds for who got teed up by Negan:

Daryl 2-1 (Too many rumors to ignore)

Glenn 3-1 (He is the victim in the comic books for those who don’t know. But his near death at the dumpster leads me to believe he will survive season six)