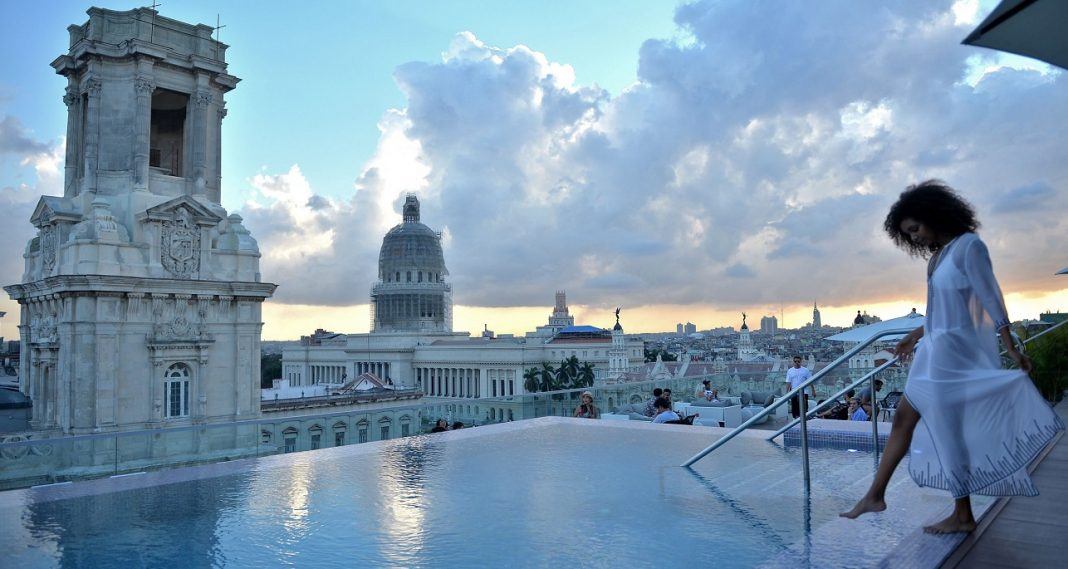 After causing quite a stir before hitting the ground in the UK, Donald Trump is now jumping in their politics hoping to get former London mayor Boris Johnson elected as the replacement for prime minister Theresa May.

“I like him, I’ve liked him for a long time. I think he’ll do a good job,” Trump said during a joint news conference with May.

The president had placed a call earlier on Tuesday to Johnson suggesting a one-on-one meeting while he was in the UK, but the former foreign secretary had to turn him down to focus on a political event.

“I actually have studied it very hard. I know the different players,” he told the UK tabloid, The Sun on prior to his arrival on Monday.

“I like him. I have always liked him. I don’t know that he is going to be chosen, but I think he is a very good guy, a very talented person.”

While in the UK, the Trump Administration has turned back the hands of time in regards to Cuba. They have imposed tougher American travel restrictions to the country which will hurt it’s tourism.

Moving from pageantry to policy during his state visit to Britain, President Donald Trump on Tuesday urged embattled Prime Minister Theresa May to “stick around” to complete a U.S.-U.K. trade deal, adding to this recent chapter of uncertainty in the allies’ storied relationship.

The president, whose praise for May follows his touting of her possible successors, met with the prime minister and corporate executives from the United States and United Kingdom as part of a day of negotiations on Trump’s second day on British soil. The leaders’ top priority is a possible bilateral trade deal to be negotiated once – or if — the U.K. leaves the European Union.

May has been dogged by her failure to secure Brexit. She plans to resign Friday, days after Trump departs England, as head of the Conservative Party but remain as prime minister until her successor is chosen. It will be the new prime minister’s responsibility to negotiate Brexit and a trade deal Trump wants for the U.S. and U.K. Trump has been sharply critical of May in the past but only had warm words for her Tuesday as he jokingly urged her to stay to “get this deal done.”

“I think we’ll have a very, very substantial trade deal,” said Trump, extolling its virtues for both nations. “I think that this is something we both want to do … we’re going to get it done.”

After Trump suggested May stay on, most in the room chuckled. The two leaders later warmly chatted during a tour of 10 Downing St., the prime minister’s office, as May pointed out a copy of the American Declaration of Independence. They also planned a joint news conference.

Traditionally, U.S. presidents avoid interjecting themselves in the domestic politics of other nations. But Trump is far from traditional.

Trump told the Sunday Times in an interview before arriving that Britain should “walk away” from talks and refuse to pay a 39 billion-pound ($49 billion) divorce bill if it doesn’t get better terms from the EU.

That move, known as a “hard Brexit,” could have a devastating impact on the U.K. economy, according to many experts, and stands in contrast to a previous White House position that the departure should be as painless as possible. Others in the U.K. are pressing for a second referendum that could keep the EU intact.

The president has also opined that Brexit party leader Nigel Farage, an outspoken advocate of leaving the EU without a deal, should be given a role in the negotiations. Farage, a divisive figure in Britain, has long been a Trump supporter. And while Trump has avoided criticizing May on this visit, unlike a year ago when he blistered her in a newspaper interview just before landing in London, the president has touted her rival, Conservative Party leadership candidate Boris Johnson, as an “excellent” leader for the U.K.

While the business leaders gathered, protesters began to assemble across London, some of whom had the now-infamous Trump baby balloon bobbing in the air near Parliament Square. Leaders of Britain’s main opposition party are due to join demonstrators at a rally in Trafalgar Square, just up the street from May’s Downing Street office. Also in Trafalgar Square: a 16-foot robotic likeness of Trump seated on a golden toilet.

The U.S. president arrived in Britain at a precarious moment, amid a fresh round of impeachment fervor back home and uncertainty on this side of the Atlantic. The day of meetings with May follow a whirlwind of pomp, circumstance and protest for Trump, who had lunch with Queen Elizabeth II and tea with Prince Charles before a grand state dinner at Buckingham Palace.

The queen used her toast to emphasize the importance of international institutions created by Britain, the United States and other allies after World War II, a subtle rebuttal to Trump, a critic of NATO and the U.N.

But most of the talk and the colorful images were just what the White House wanted to showcase Trump as a statesman while, back home, the race to succeed him — and talk of impeaching him — heated up. Yet Trump, forever a counter-puncher, immediately roiled diplomatic docility by tearing into London Mayor Sadiq Khan.

As so often happens when Trump travels overseas, norms were shattered, including when the president complained about his television viewing options in the foreign capital and urged people to punish CNN by boycotting its parent company, AT&T.

Following Tuesday’s focus on business and trade, Trump will use the next two days to mark the 75th anniversary of the June 6, 1944, D-Day landing, likely the last significant commemoration most veterans of the battle will see. The events will begin in Portsmouth, England, where the invasion was launched, and then move across the English Channel to France, where Allied forces began to recapture Western Europe from the Nazis.

French President Emmanuel Macron is expected to use the occasion to call for strengthening multinational ties the U.S. president has frayed.

Donald Trump supporters love the idea of returning to the ‘good ole days’ so his administration appears to be doing just that with US travel to Cuba.

The Trump administration on Tuesday imposed major new travel restrictions on visits to Cuba by U.S. citizens. This includes banning cruise ships and a heavily used category of educational travel in an attempt to cut off cash to the island’s communist government.

The Treasury Department said in a statement that the U.S. will no longer allow the group educational and cultural trips known as “people to people” travel to the island. Those trips have been used by thousands of American citizens to visit the island even before the U.S. restored full diplomatic relations with the communist government in December 2014.

Cruise travel from the U.S. to Cuba began in May 2016 during President Barack Obama’s opening with the island. It has become the most popular form of U.S. leisure travel to the island, bringing 142,721 people in the first four months of the year, a more than 300% increase over the same period last year. For travelers confused about the thicket of federal regulations governing travel to Cuba, cruises offered a simple, one-stop, guaranteed-legal way to travel.

That now appears to be over.

“Cruise ships, as well as recreational and pleasure vessels, are prohibited from departing the U.S. on temporary sojourn to Cuba effective tomorrow,” the Commerce Department said in a statement.

Treasury said it would also deny permission for private and corporate aircraft and boats. However, commercial airline flights appear to be unaffected and travel for university groups, academic research, journalism and professional meetings will continue to be allowed.

“It kills the people-to-people category, which is the most common way for the average American to travel to Cuba,” said Collin Laverty, head of Cuba Educational Travel, one of the largest Cuba travel companies in the U.S.

Treasury Secretary Steven Mnuchin said the measures are a response to what it calls Cuba’s “destabilizing role” in the Western Hemisphere, including support for the government of President Nicolas Maduro in Venezuela.

“Cuba continues to play a destabilizing role in the Western Hemisphere, providing a communist foothold in the region and propping up U.S. adversaries in places like Venezuela and Nicaragua by fomenting instability, undermining the rule of law, and suppressing democratic processes,” he said. “This administration has made a strategic decision to reverse the loosening of sanctions and other restrictions on the Cuban regime. These actions will help to keep U.S. dollars out of the hands of Cuban military, intelligence, and security services.”

The new restrictions had been previewed by national security adviser John Bolton in an April speech in Miami to veterans of the failed 1961 Bay of Pigs invasion but details of the changed were public until Tuesday. Treasury said the sanctions would take effect on Wednesday after they are published in the Federal Register.